For the product tankers, Handysizes peaked at USD 35,000 per day in Q4 before heading south as the other product tanker segments did in January, only to rebound in the second half of February. 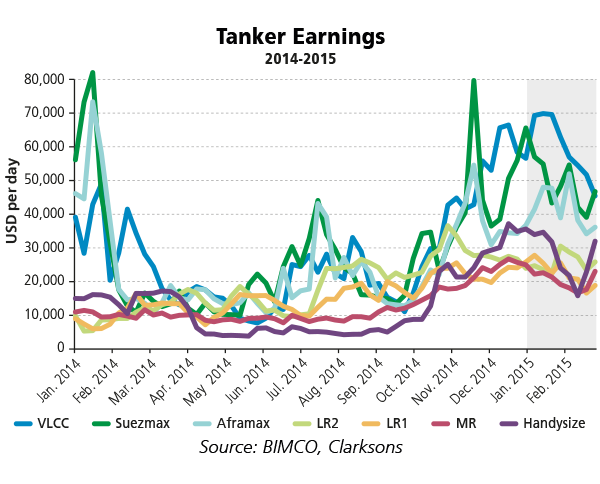 In the product tanker market, freight rates on the spot market shot up in October and have managed to stay high since then. They have also enjoyed increased demand from the drop in oil prices as more arbitrage opportunities (taking advantage of a price difference between two or more markets) developed in combination with a strong season uptick.

It seems confirmed that crude oil tankers are now responding to the improved trading environment by sailing at higher speed. In the previous BIMCO tanker report it was advocated that slow steaming is important to ensure that product tankers do not depress freight rates.

Not since the first half of 2010 have we seen a “normal” priced T/C market for VLCC. Just before Christmas 2014, the one-year T/C rate for a 310,000-DWT modern VLCC returned above the three-year and five-year quotes at USD 40,000 per day. This is illustrative both of the excitement in the market and an indicator that the significant oversupply seen in recent years has somewhat eased. The one-year T/C rates went as low as USD 18,000 per day in 2013 on the back of limited fixture activity as no owners wanted to commit on such low levels; at the same time the five-year T/C rate struck a multi-year low too at USD 26,000 per day. At the end of February, the one-, three- and five-year T/C rates stood equal at USD 43,000 per day.

A lot of talk about the steep contango in oil prices (where the forward price is higher than spot price) has circulated during the winter on whether or not it could translate into a widespread employment of large crude oil tankers to floating storage. Such a development could boost demand and send freight rates higher. So far, we have not seen much pointing in this direction, as owners as well as speculators who could benefit from this price spread have been reluctant to engage. Floating storage has appeared only to a limited extent.

Supply:
It is no surprise at all that the order book for crude oil tankers is growing as the only one among the major shipping segments. Twelve new VLCC orders, six Suezmax orders and four Aframaxes have been placed so far in 2015. This has lifted the crude oil tanker order book by 4.5%. Orders for VLCC have been shared among the three top builders, whereas the orders for Suezmax and Aframax have all been placed in China. China remains the builder that offers the lowest prices on newbuildings.

During 2014, 24 newbuilt VLCCs entered the trading fleet against 30 in 2013. So far three VLCCs has been delivered, with another 25 scheduled for delivery. BIMCO expect some slippage will occur that will support a stronger earnings environment. However, the window of opportunity also seems to close somewhat in 2016, which currently has 54 VLCCs scheduled for delivery.

The VLCC fleet grew last year by 2.3% and is on course for 3.1% in 2015, taking an unchanged level of demolition into account.
Looking at product tankers, the LR2 segment is where action on the supply side is taking place in 2015. For a total fleet that consists of 239 units at the start of the year, the addition of 32 (including slippage) will inevitably be quite a mouthful.

BIMCO expects demolition in both tanker segments to be around the same level as in 2014, with no significant one-off events likely to rock that boat. So far the demolition activity in 2015 has naturally been very low with strong markets, just six old product tankers and two VLCCs built in 1989 and 1992. 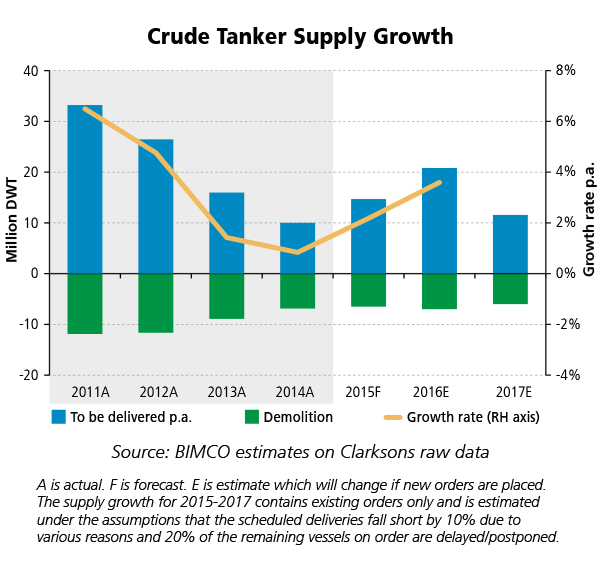 Global oil supply is likewise expected to go higher, though not as much as demand. This will narrow the oversupply gap somewhat. IEA notes that the market response to lower oil prices is asymmetrical in the sense that the supply side has become more price-elastic, whereas demand less so. 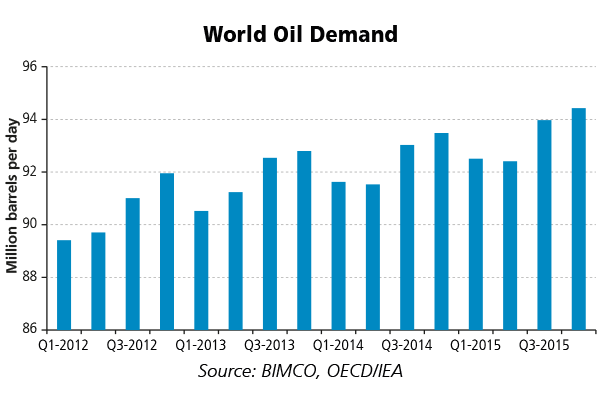 Global oil supply is a volatile element, one that affects the tanker markets somewhat – not by creating uncertainty but it sure makes a difference to tons-miles demand if oil supply comes from the US, Libya or Iraq that alone sold nearly 3 mb/d in December. In January 2015, Iraq only exported 2.5 mb/d. Normally the Organization of the Petroleum Exporting Countries (OPEC) exports benefit the crude oil tanker markets as they traditionally go long-haul, so the lack of OPEC supply may explain some of the sliding freight rates seen since the start of year.

Meanwhile in the US, shale oil producers are scaling down the number of rigs drilling for oil in their response to the lower oil prices. Whether this actually brings down supply significantly or only cuts costs for the marginal barrel remains to be seen. Until now, none of the large oil-producing nations has announced large cuts in oil production.

Adding to that positive story is the Middle East export refinery expansions coming on stream in 2015. The Yanbu facility on the west coast of Saudi Arabia along the Red Sea expects to serve customers globally with 400,000 barrels per day of refined oil products. Whereas the Yanbu refinery is export-oriented, the new large-scaled expansion of the Ruwais facility in Abu Dhabi is expected to be domestically oriented. A development like this illustrates the oil-refinery dislocation story is still very much alive, lifting hopes higher for oil product tanker demand going forward.

Contact online
BACK TO: Container Shipping - Striking the balance is tough when everyone wants to get “back into the black” NEXT: China’s manufacturing sector is struggling to keep up pace