Limited economic growth potential and the slow pace of recovery of the global economy is only easing the pain in the global shipping industry to some degree...

Limited economic growth potential and the slow pace of recovery of the global economy is only easing the pain in the global shipping industry to some degree. While the industry continues to suffer from oversupply in the freight market, the International Monetary Fund (IMF) now projects the demand side to be even less accommodative than previously assessed.

Chief Shipping Analyst at BIMCO, Peter Sand, says: “The downward adjustment was expected, but it hits hard nonetheless. The global shipping industry needs much stronger support from the demand side to gradually improve the situation of too many ships chasing too few cargoes.

“However, we cannot shy away from the fact that too many ships is primarily an internal problem that we have to solve. Amongst the elements that are effective in working to improve the fundamental balance are: slow steaming, the recycling of commercially sub-standard ships and adding capacity by using the second-hand markets”.

In the Developing and Emerging Economies, China and Russia are grabbing the headlines. As Chinese policy-makers continue to reduce the risks from the housing market and shadow-banking sector, slower growth follows in the wake. The focus on the transition from an investment-driven economic growth to a consumption-driven one has also lowered GDP growth going forward. However, as the world’s second-largest economy is still growing by 6.8% in 2015, down from 7.4% in 2014, the high growth level remains a key support for global shipping demand.

Despite being a minor economy in itself, the geopolitical uncertainty originating from Russia affects shipping negatively. Dry bulk exports, imports of containerised goods, as well as the trade in oil products, are experiencing a lot of uncertainty as sanctions bite and trading conditions suffer. The IMF expects that the Russian economy will shrink by 3.0% in 2015.

“The lower oil price is good for shipping as well as for the oil importing countries as it bring costs down and boost demand, whereas the lower Chinese growth rate affects the entire intra-Asian trades negatively. 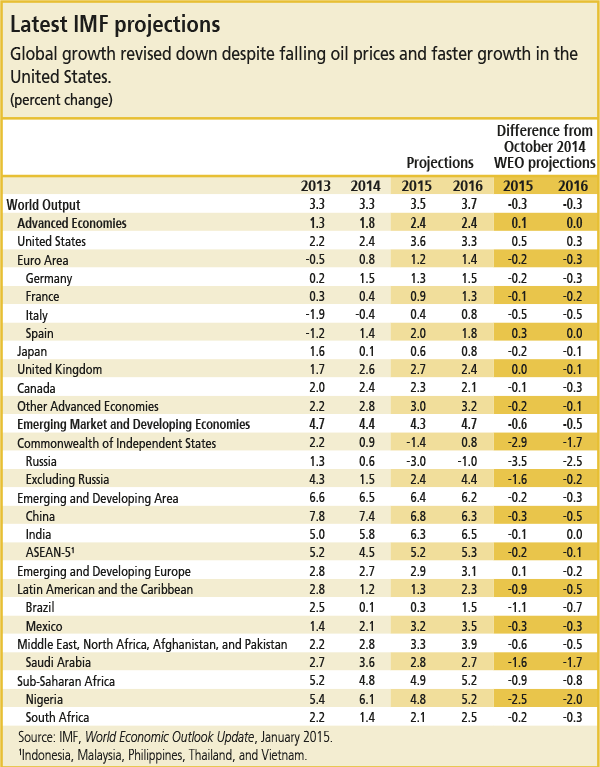 Contact online
BACK TO: BIMCO on Bloomberg Intelligence Webinar - Playback Video NEXT: Suez Canal providing respite for the shipping industry