While we await the long-anticipated rebound in Capesize freight rates centred on Brazilian exports, let's focus on the brighter spots elsewhere in dry bulk shipping

DEMAND:
While we await the long-anticipated rebound in Capesize freight rates centred on Brazilian exports, let’s focus on the brighter spots elsewhere in dry bulk shipping. 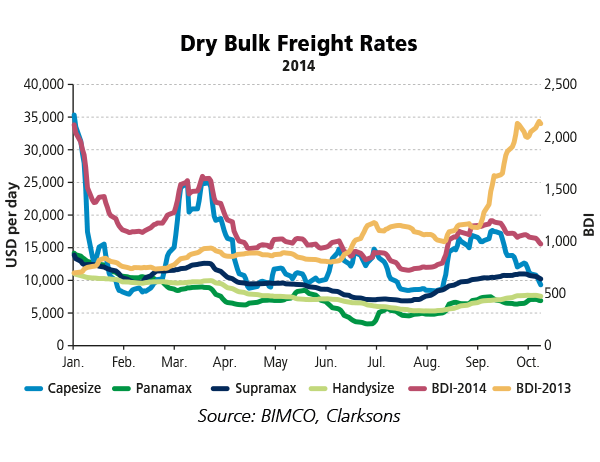 Panamax freight rates are dragging along, as the oversupply is still clearly felt in the freight market. Fortunately, the erratic movements have now been mostly upward since the bottom-out on 27 June at USD 3,362 per day. Since then, freight rates have more than doubled to USD 7,101 per day, but this is still very different from delivering healthy earnings to owners and operators as the present ones are barely covering OPEX.

Supramaxes and Handysizes live a less volatile life than their larger peers do, and the rebound is clearly felt and seen, moving from the lower end of BIMCO’s forecast freight rate interval to the top for Handysizes, with Supramaxes still firming to close the gap completely.

Freight rates for all four segments have performed as forecast in our last report; a positive development without fireworks. The only disappointment was the fact that Capesize freight rates only reached USD 17,670 per day on 10 September and have since then slid down to USD 11,000 per day.

The development in the sub-Capesize ship sizes mirrors very well what we have experienced in terms of demand. The weak development of coal cargoes into China has given some softness to the Panamax market, with Indian imports failing to make up for all the lost demand. In the meantime, the Supras and Handies have both benefitted from the strong demand for minor bulks. On top of that, we have surging Indian coal imports up by 19% year-on-year to 16 million tonnes in September, as busy power companies went on a buying spree at low international prices.

The grain export season is also up and running now across the northern hemisphere. Even the exports of wheat and barley from Ukraine have contributed positively to the market, despite the difficult situation Ukraine is facing due to the stand-off with Russia. Russia’s exports of the same commodities are also very high and projected to hit record levels this year as the season progresses. Russian exports in August were at a record high of 4.2 MT according to USDA, as seasonality spikes exports. In Ukraine, exports are strong too at 3.3 MT in both August and September, according to BIMCO data. 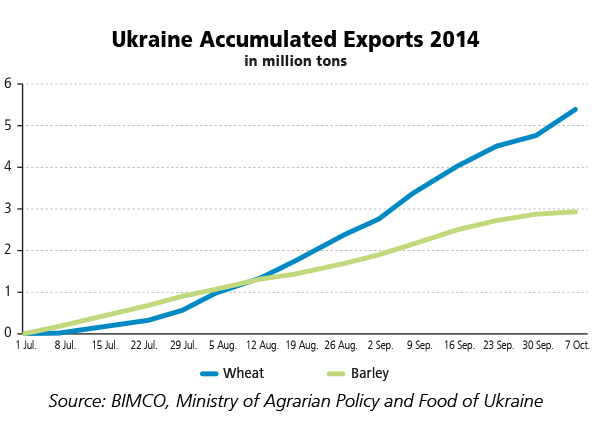 SUPPLY:
The dry bulk carrier fleet has grown by 3.6% in the first nine months of the year – 37.8 million DWT (486 units) have been delivered, offset by 11.5 million DWT (213 units) being demolished. One-third of the total added capacity came in the form of 66 Capesizes and 1 Valemax. In addition to that, 144 Panamaxes, 150 Supra-/Handymax and 125 Handysizes entered the active fleet.

BIMCO forecast the total level of newbuilt deliveries for 2014 to reach 55 million DWT, with the current forecast for 2015 heading for a slightly lower level than that. Since our last report, the order-book for 2016 has built up to reach 60 million DWT. With demolition expected to remain somewhat unchanged, this will again increase the pressure on the fundamental supply-demand balance as the fleet could expand by almost 6% again, up from 5.2% projected for 2015. 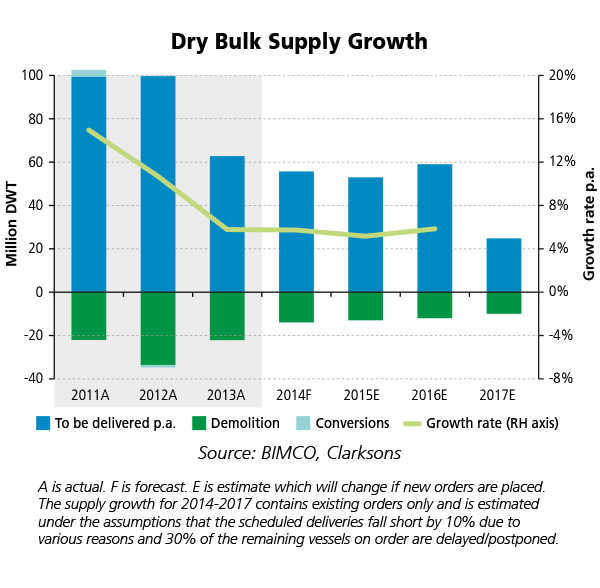 Fortunately, the newbuilding contracting activity has been more subdued in 2014 as compared to the rush of 2013, where 102 million DWT of new orders were placed. At the beginning of October 2014, the year-to-date contracting volumes stood at exactly half that of the full year 2013. 2014 is therefore heading for a significant slowdown from 2013, but still a level that does not support an improved market balance going forward unless it is combined with a strong demolition activity, which BIMCO does not expect to happen.

OUTLOOK:
The poor state of the freight market has naturally also affected asset values in a negative way. At the beginning of October 2014, Capesize ships made most of the gains from the early parts of the year, while the three smaller segments are in the red by 7% to 20% – the older the ship the bigger the lost value as assessed by Vesselvalue.com.

Uncertainty mounts around the future imports of coal into India. This follows the ruling by India’s Supreme Court to deem illegal 214 out of 218 coal-block licences allocated to various companies from 1994-2010, of which 42 are being worked. Following a six-month grace period given prior to the closing of the mines, only four could potentially continue operations. Should this become reality, significant seaborne imports will follow once the stockpiles have been run down.

Nevertheless, it is too early to know if only four mines will continue to operate beyond 24 March 2015. Imports are likely to come from South Africa, as India favours the higher quality to the higher ash content (23%) coal imports from Australia, which is seeking new buyers, with China potentially shying away from imports of thermal coal with an ash content higher than 16% from 1 January 2015. These are two wild cards for the seaborne coal trade next year if implemented as described.

The oversupply of iron ore into the market has dragged prices to the floor. In September 2014, iron ore prices reached a five-year-low for 62% Fe content delivered at Qingdao, China, as it went below USD 80 per tonnes. This low level does not reflect poor demand conditions for iron ore or lower steel production in China, which is up by 5% in the first eight months of 2014. However, the lower iron ore prices may push forward a higher Chinese import level, as domestic production can be squeezed out because of higher production costs, as well as lower commodity prices tending to spur increased seaborne demand.