1. The Conference Board Consumer Confidence Index (CCI)* continued to improve in August. The CCI went up for the fourth consecutive month (from 90.3 (adj.) to 92.4) as improving business conditions and robust job growth helped boost consumers’ spirits. Overall, consumers remain quite positive about the short-term outlooks for the economy and labour market despite having doubts about whether their income will increase over the next six months.

Chief Shipping Analyst at BIMCO, Peter Sand, said:
"Economic news from the US shows that the world’s largest economy is getting better by the day, leaving the devastating first quarter GDP setback behind.
“For an economy mainly driven by consumer spending this is good news for shipping – in particular we expect this to positively affect demand for trans-pacific container shipping – but also to increase US East Coast container imports.
“As containerized goods are predominantly consumer products, the improvement in the housing market also contributes to boosting confidence and shipping demand.” 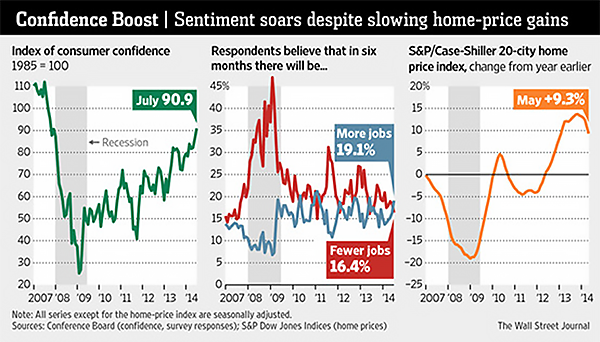 2. Improving economic conditions are also visible in the US housing market. US housing starts surged to an eight-month high in July leaving the standstill during H2-2013 behind. Privately-owned housing starts, grew by 15.7% in July to a seasonally adjusted 1.09-million unit annual pace, according to the US Commerce Department. The gain reversed two months of consecutive declines.

Peter Sand also commented that:
“Furniture and appliances are among the top categories of imported containerised goods into the US from Far East Asia – which is why we follow the housing market closely.
“BIMCO’s own US West Coast import data show a 4.0% increase for loaded containers during the first seven months of 2014 over same period last year.
“US East Coast improved comparably by 8.8% during the first six months.”

* The CCI is an indicator measuring consumer confidence, which is defined as a degree of optimism on the state of the economy that consumers are expressing through their activities of savings and spending. Index level 90 is considered the minimum level associated with a healthy economy. Above 100 signals strong growth.

Contact online
BACK TO: Tanker Shipping - Crude oil tankers out-perform their oil product peers in a market full of surprises NEXT: BIMCO on Bloomberg Intelligence webinar: The shipping market