Some time ago, BIMCO expected the first signs of a solid recovery in the oil tanker industry to appear in the product tanker market. However, like other soon-to-arrive recoveries, the waiting time tends to increase as we approach the expected tipping point. This time around, global refinery throughput started the year strongly but entered a still running soft patch in May, high volumes but shorter hauls out of the US Gulf, and the steady inflow of new ships were part of the cocktail that prevented freight rates from taking off big time.

DEMAND:
Some time ago, BIMCO expected the first signs of a solid recovery in the oil tanker industry to appear in the product tanker market. However, like other soon-to-arrive recoveries, the waiting time tends to increase as we approach the expected tipping point. This time around, global refinery throughput started the year strongly but entered a still running soft patch in May, high volumes but shorter hauls out of the US Gulf, and the steady inflow of new ships were part of the cocktail that prevented freight rates from taking off big time. Over time and changing conditions, BIMCO’s freight rate assessments have been close to the target. For the past two months, we have expected to see clean rates for Handysize and MRs move sideways, with an upside potential. What we got was sideways movement with a downside tendency. 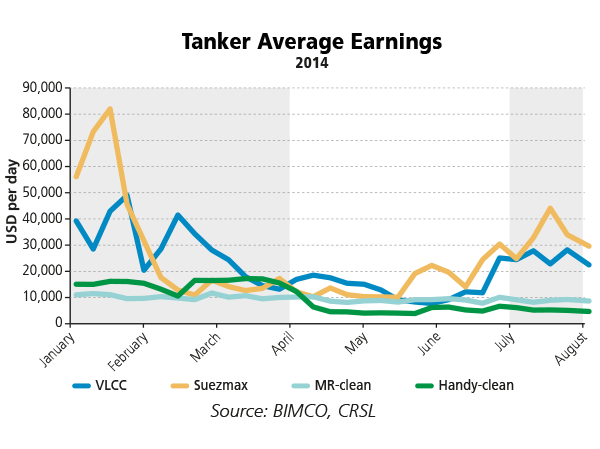 Instead, crude oil tankers showed incredibly positive momentum going into Q3. Earnings surpassed our expectations for a ceiling at USD 20,000, to reach USD 44,058 per day briefly in mid-July for Suezmax tankers.

A stronger freight market is often followed by a stronger second-hand market. This time around, things have been no different, especially for VLCCs. Data cleaned for large en bloc deals reveals that 36 VLCCs have changed hands during the first seven months of 2014. In 2012 and 2013, the figures were 26 and 32 respectively.

Although there are few similarities between the transactions, one element sticks out. Half of the sold vessels are heading for the third special survey (SS) soon, one that could prove expensive. Ten of the 18 vessels have their next SS scheduled for 2015, whereas the remaining eight are already bound for a special survey later this year. This divestment of ships prior to an SS could point in the direction of lost faith by the seller in future earning power as ship pass the age of 15. 15 years and above is where oil majors dare to go.

US crude oil exports hitting a 15-year high in May have made a few headlines recently, as the debate continues on whether to “update” the US policy that de facto prohibits export of unrefined crude oil to other nations than Canada. A few cargoes of condensate heading for the Asian market that received permission further fuelled the discussion. The fact is that +90% of crude oil exports go to Canada, and a lot of it via pipelines. Fixture lists only show a handful of tankers that have been engaged in this trade. Should the US start to export crude oil on a large scale to places other than Canada, it surely holds the potential to affect trade as we know it today if the price and quality of the oil matches demand. 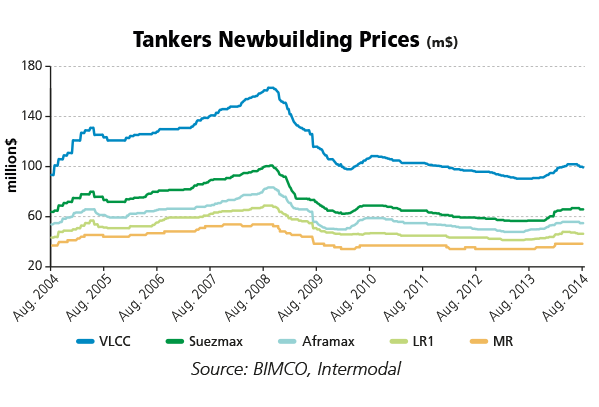 SUPPLY:
While owners have recently hesitated to place orders for dry bulk and container ships, the renewed interest in placing tanker orders has been worth noticing, mostly in the crude oil tanker segments for 2016 delivery. During the past two months, the total tanker order book has risen by 4% to hit 69.2 million DWT, equal to 13.6% of the active fleet. In spite of this flurry, it remains the lowest order book-to-fleet ratio amongst the three main segments, where dry bulk holds the highest ratio at 23.0%, and container ships lie in the middle at 17.8%.

New orders have been mainly for crude oil tankers, but in the supply growth outlook, estimated product tanker deliveries for 2016 have gone higher too. The next few years remain largely unchanged. A pair of VLCCs were ordered for 2017 delivery, the first orders for VLCCs since early April. Fleet growth for crude oil tankers in general and for VLCCs specifically, has finally done something good for the market balance. BIMCO expects supply growth for 2014 just above the multi-year low level of 2013.

46 out of 64 new product tankers were MRs, which throughout the year are expected to increase by another 40. The other segment in focus this year, VLCCs, have seen the delivery of just 14 new ships in the first eight months of 2014, with 11 expected for the remainder of the year. Last year, 28 newbuilt VLCCs were delivered. The slower delivery pace has eased some of the supply-side pain which has added to the fundamental market conditions.

The weaker freight market that has placed downward pressure on newbuilding prices in recent months may also have encouraged investors and owners to take another shot at the tanker market in the hope that they will hit the new, temporarily low, market price before asset prices pick up more consistently again.

The demolition of tankers continues as expected. A couple of owners took advantage of the high prices to sell two 1993-built VLCCs for breaking in Pakistan at USD 500 per LDT. 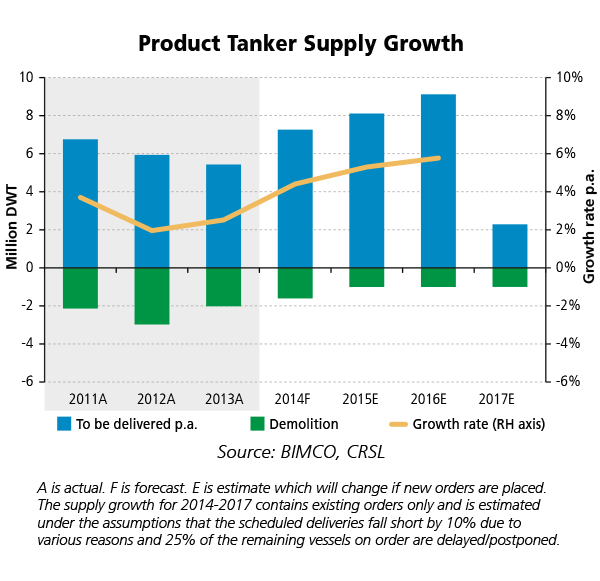 OUTLOOK:
Going forward, the supply side is expected to worsen somewhat at the same time where demand is expected to improve. This would in turn leave the fundamental supply-demand balance unchanged with little room for massive and sustainable freight rate improvements. 2016 is a little too far into the future to conclude anything, but the higher influx of new ships does require a solid demand development to level things out.

The many crude oil supply disruptions have left a muddy picture of the overall situation. The unrest in Iraq is likely to limit production growth going forward, in spite of Iraq appearing to maintain ability to limit the impact on the global market form its internal disputes. Also, Libya, which used to supply 1.5 million barrels per day, faces severe disruptions. Syria and Russia are the other large producers and exporters experiencing serious headwinds due to civil war, territorial disputes and sanctions. At the same time, the oil price remains steady, suggesting that the expected oil consumption for the future are not aiming for the stars. This, in turn, means that the tanker market needs to feed on changed trading patterns rather than sheer volume growth in future.

Will the interest in newbuildings pick up any time soon? According to BIMCO calculations, all tanker sub-segments, from VLCC to clean Handysize, would return a negative cash flow under the assumptions of a 60% debt-financed ship at 4% interest and a ten-year repayment profile deployed on a 1-year time charter hire. Even under a 15-year profile, the only ship that was able to return a positive cash flow was the Handysize product tanker.

For August/September, BIMCO expects earnings for the all the crude oil tanker segment to stay above USD 20,000 per day. VLCC may go as high as USD 35,000 per day, while Suezmax and Aframax crude oil carriers could be reaching USD 30,000 per day in a volatile market.

Contact online
BACK TO: Dry Bulk Shipping - All eyes on Brazilian iron ore exports, as we await the long-anticipated lift in freight rates NEXT: Key US indicators prove stronger demand for container shipping

Peter Sand, BIMCO Chief Shipping Analyst, will present at the TradeWinds Tanker Shipping Forum. The webinar will focus on solutions and visionary ideas about...