Dry Bulk Shipping - All eyes on Brazilian iron ore exports, as we await the long-anticipated lift in freight rates

The freight market, which performed so well in Q1, has certainly not delivered in the past 4 months. BDI has dropped from 1,621 on 20 March to hit 747 on 29 July. Panamax ships have not been above USD 10,000 per day since 20 February, and below USD 5,000 per day for most of June and July. BIMCO expected challenging market conditions, also for Panamaxes, but rates below USD 5,000 per day were an unpleasant and unexpectedly low level.

DEMAND:
The freight market, which performed so well in Q1, has certainly not delivered in the past 4 months. BDI has dropped from 1,621 on 20 March to hit 747 on 29 July. Panamax ships have not been above USD 10,000 per day since 20 February, and below USD 5,000 per day for most of June and July. BIMCO expected challenging market conditions, also for Panamaxes, but rates below USD 5,000 per day were an unpleasant and unexpectedly low level. 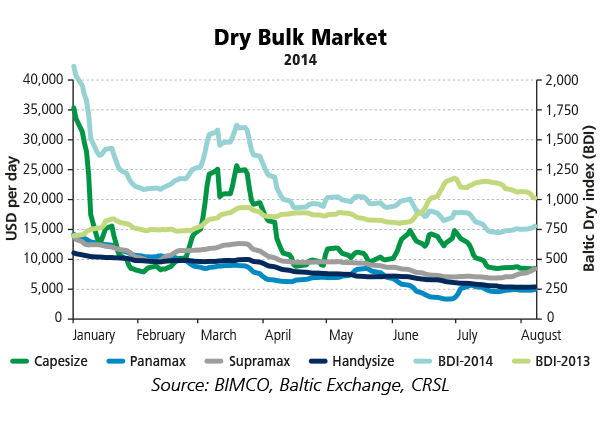 As we have entered into the second half of the year, the anticipated freight rate recovery for Capesize ships in particular should start soon. In our last report, we made the case that more long-haul shipments of Brazilian iron ore are required to deliver significantly higher freight rates. Supported by seasonality, in conjunction with the announcement made by Brazilian mining giant Vale, expecting its iron ore shipment in second half of the year to be 22% higher than the first half, the case is still on target. Freight rates on the West Australia to Qingdao, China, route peaked in March at USD 22,661 per day (today: USD 6,681 per day), whereas freight rates Brazil to Qingdao, China, hit USD 40,797 per day in March (today: USD 18,065 per day).

The pause in recovery has meant a tepid demand for newbuildings. This has caused prices to fall for the first time in two years, according to Intermodal. Today, an 180,000 DWT Capesize ship costs USD 56 million – 20% more than in 2012 – and with indications of cheaper prices around the corner. At the market peak in 2008, a Capesize newbuilding would have set you back USD 100 million. Kamsarmax/Panamax newbuildings can be acquired at around USD 30 million, up by 10% on 2012-level. 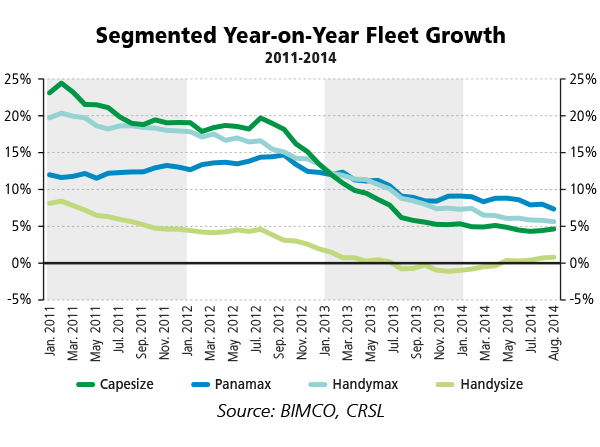 The slowing fleet growth over the past 20-something months has spurred optimism in the industry. Whereas developments have been gentle to the Capesize and Handysize fleets in particular, Panamax ships are continuously feeling the heat. The Panamax fleet has grown by 84 ships, the most out of the four sub-segments since the start of the year. Including 2013, it becomes clear that the heat is partly on for Handymax/Supramax ships too.

The improvements seen on the supply side of the Capesize segment are mirrored in the freight market, with rates becoming more volatile once again. The opposite, where the supply side is still outstripping the demand side, has resulted in steadily falling freight rates, with low volatility for Panamax and Handymax ships. 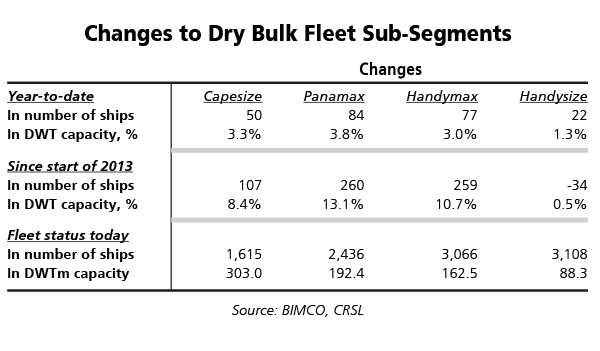 The supply growth for the years 2014 and 2015 follows our expectations closely. What is new in the supply side outlook is the lift in estimated 2016 deliveries. The overall order book has grown by more than 10 million DWT in the past two months, with the majority of those contracts destined to be built for as late delivery as possible. New orders in total have climbed to reach 41 million DWT, out of which 50% is for Capesize ships and VLOCs. Amongst the noticeable orders are 4 ships with a capacity of 260,000 DWT placed in a Chinese yard by the Australian mining company Fortescue Metals Group; yet another mining company who is dipping its virgin toes into the ship owner’ ocean.

On another scale, Brazilian mining giant, Vale have only three VLOCs with a capacity of 400,000 DWT left for delivery. According to the schedule, the ships will be delivered before the end of this year. Vale will then control a fleet of 35 VLOCs, owned or chartered-in. This fleet represents the most ambitious ship owning adventure from a commodity producer ever. Whether these purpose-built giants will fulfil their intended function – providing iron ore directly from Brazil to the ports of the world’s largest buyer, China – remains to be seen. 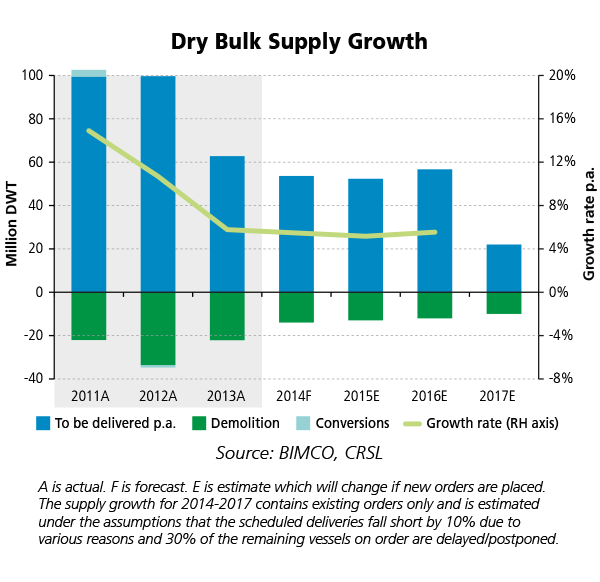 Year-to-date, 8.1 million DWT has been demolished in total, with Panamaxes rather surprisingly being toppled by the other segments. 2.8 million DWT of the total demolished ship capacity were Capesizes, 1.8 million being Panamax capacity, with 3.5 million DWT being split between the Handy segments.

OUTLOOK:
In theory, the current oversupply of both iron ore and coal in the global commodities market provides the shipping market with lots of cargo opportunities. However, we need the customers to create the demand. For iron ore, it has not been a problem to find customers and a lot of shipping demand comes on the back of the increased supply of quality ore and subsequent strong demand for it. For coal, in particular steam coal, it has been somewhat different. There has been lots of supply coming into the market but the demand situation has developed somewhat differently from what we expected earlier. The Chinese market is well supplied already, Japanese power consumption has been low and only South Korean demand has been lifted significantly above the level of last year.

On a positive note, BIMCO can see that the grain and soya exports that we placed in a supporting role to the overall demand development has turned out stronger than originally expected. As we have now entered into the second half of the year, volumes should know only one way, and that is up. In the Capesize segment, this should provide impetus for higher freight rates, as the supply situation is “under control”. To what extent the Panamax and Supramax freight rates will follow suit is more uncertain. BIMCO expects they will improve, but hardly shoot up like a rocket.