Macro Economics - Take nothing for granted; we need reforms to improve economic performance

The International Monetary Fund (IMF) has downgraded its global growth projection from 3.7% in April to 3.4% in July. The adjustment is primarily due to the large negative result in the US in the first quarter of the year. The IMF stressed that this is now behind us – and it therefore sticks to its 2015 projection with an unchanged growth level of 4.0%.

Global economy:
The International Monetary Fund (IMF) has downgraded its global growth projection from 3.7% in April to 3.4% in July. The adjustment is primarily due to the large negative result in the US in the first quarter of the year. The IMF stressed that this is now behind us – and it therefore sticks to its 2015 projection with an unchanged growth level of 4.0%. Moreover, the outlook for the various emerging markets including, amongst others, Russia, ASEAN-5, Brazil, Mexico and South Africa, is now less optimistic compared to the assessment made three months ago.

Regardless of slower economic activity, the projected level of world trade volumes (goods and services) was unchanged from IMF’s April projection.
Overall, the recovery is still not very strong and still needs support. Different stages of the recovery require governments and institutions to apply different measures. Reforms are needed across the board and they are coming, but often too late and too slowly in many countries. Despite the aggressive monetary policy deployed by many nations, the IMF sees no major risk bubbles right now. It appears as if the markets understand quite well what the central banks are doing. This reduces the downside risks of these operations.

US:
The very disappointing performance of the US economy in Q1 (-2.1% in Q1-2014) led the IMF to reduce annual growth expectations for the US in 2014. A sluggish level of private demand (goods and services), in combination with declining exports, contributed much more negatively to GDP growth than initially estimated. As BIMCO expected, all of that changed in Q2, according to the advance estimate, as GDP grew by 4.0%, leaping forward through a reversal of the negatives in Q1.

The macro economic development is mirrored perfectly in BIMCO’s own US West Coast container export and import data. January/February exports of containerized goods were in considerable negative territory, whereas March clawed it all back to end Q1 y/y at +0.5%.

Despite that, the recovery in the US remains the strongest in the western part of the world and the Central Bank (FED) continues to taper off its quantitative easing programme concurrently with economic improvements; now the FED “only” purchases bonds worth USD 25 billon per month, down from an exorbitantly high USD 85 billion in each month of 2013.

Growth has been strong enough in the past few years to create much-needed jobs, though the FED believe there is still room for improvement. In time, this job-generation will make the recovery self-sustainable.

Asia:
In China, the economy grew by 7.5% in the second quarter, reversing the slightly negative trend from the past two quarters, coming in higher than the 7.4% growth in Q1. This happened in close correlation with the authorities’ aim to control credit growth. A looser credit policy in the second quarter as compared to the first immediately resulted in higher growth rates. 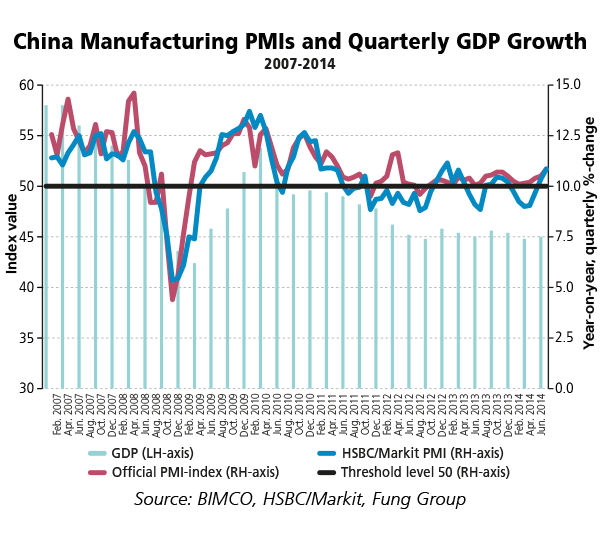 June also marked the return of both Purchasing Managers Indexes (PMI) into positive territory for the first time since December 2013. The weakness seen in the early stages of the year appears to be gone for now. Other indicators confirm that the economy is still moving forward fast; most noticeably the Chinese steel industry produced 3% more steel in the first half of 2014 (412 million tonnes) as compared to H1-2013 (400 million tonnes). China produces half of the world’s steel and has doubled its output in just 8 years. Full year production in 2006 was 421 million tonnes.

In Japan, growing inflation stemming from VAT increases and yen weakness has confirmed that the Central Bank is on the right track and it seems firm in its pursuit of additional monetary policy stimuli. This leaves the full focus on “Abenomics’” so-called third leg, which consists of a growth strategy with a wide range of reforms, mainly effecting corporate tax, the labour market, pension system, and also potentially legalising gambling, to generate more revenue. The execution, effect and scope of the strategy will directly influence the Japanese economy.

EU:
The weak and uneven pace of recovery in the Euro area is affecting the efficiency of the European Central Bank’s (ECB) operations. Nevertheless, the main issue in Europe is still the inadequate amount of demand. The level of activity is still not high enough to reduce unemployment sharply and secondarily, to bring down debt levels.

This low activity level puts pressure on the ECB too and the bank must remain focused on bringing inflation up to its target level at around 2% – which is rather far from the level of 0.5% in June. Euro area flash inflation for the month of July released on the last day of the month showed an alarmingly low level of +0.4% y/y. No inflationary pressure is visible, as capacity can easily cater for the subdued level of demand from private households as well as businesses. 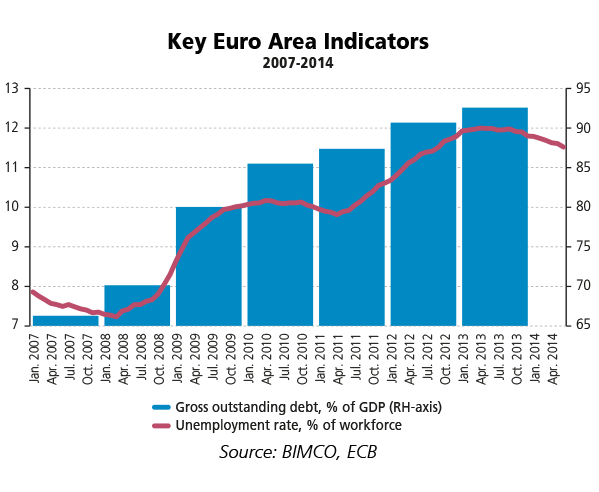 The ongoing tension between Ukraine and Russia may have a negative spill over effect on the economies in Europe. Both countries are significant trading partners with several European nations, especially as regards energy. Coal prices have already gone up, and we could see rising inflation stemming from higher energy prices when demand goes in tandem with lower temperatures in Europe.

Outlook:
Now we have confirmation that economic development in China is not about to stall, it should comfort the market and provide impetus for a stronger freight market in the second half of 2014 unless the supply side fails to deliver, or China unexpectedly suffers a set-back.

As regards to Europe, the IMF expects France and Italy to perform worse than previously projected in April. This is not just due to bad fortune in the first half, as was the case in the US, but also to a significant lack of reform of the systems needed to turn the current situation around and prepare for a brighter future. Spain, on the other hand, could perform more strongly in both 2014 and 2015, leaving negative growth rates behind in 2013.

In the US, the adverse weather conditions this year have cut GDP growth expectations from 2.8% down to 1.7% but going forward, the US is now looking at 3.0% in 2015, up by 0.1 percentage points from April projections.

To conclude, 2014 is still on track to beat the 2013’s performance in GDP-terms. By a narrower margin than originally foreseen. With a bit of luck, we can avoid a photo finish to make the call at the end.

Contact online
BACK TO: Container Shipping - The peak season is off to a good start and the balancing act in the freight market is as important as ever NEXT: Key indicators relevant for shipping demand