The demand side continues to improve on a global scale. The winter weakness in the US and still-sluggish demand in Europe has been offset by continued strong demand on North-South trades in the Atlantic basin and improving conditions on the ever-strong intra-Asian trading lanes.

DEMAND:
The demand side continues to improve on a global scale. The winter weakness in the US and still-sluggish demand in Europe has been offset by continued strong demand on North-South trades in the Atlantic basin and improving conditions on the ever-strong intra-Asian trading lanes. Demand-side growth is outstripping supply-side growth now, which is something that improves the fundamental balance in the market. This difference is 1-2%, not a landslide change from one day to the next, but a most welcome move in the right direction.

It should be borne in mind that the container shipping industry is still carrying around huge overcapacity. Some of it originates all the way back to 2009, where the difference between supply and demand was enormous. This put the fundamental balance off by a 9% contraction of demand, primarily on the long main lane hauls, while at the same time, the supply side grew by 6%.

As operators on the Far East to Europe trading lanes treads very carefully in order to avoid putting too many ships into service on that market, freight rates have responded positively to the effects of slow-steaming, blank sailings, and outright cancellations. The spot freight rate average of 2014 (January-August) is USD 1,281 per TEU, 19.5% higher than the USD 1,072 per TEU recorded for the same period last year. On trans-Pacific to US West-Coast, rates have fallen 14% over the same period. 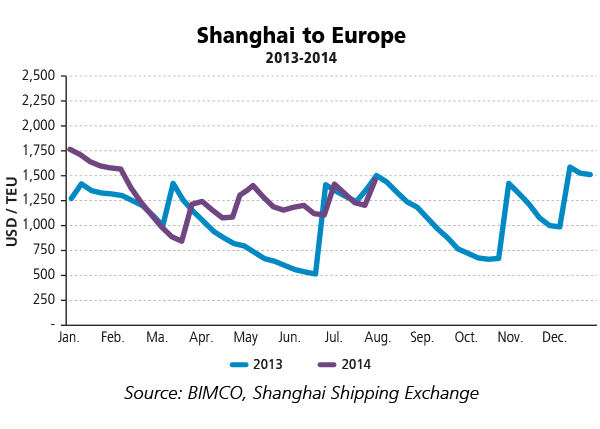 The time charter market for Panamax sized ships and those smaller in capacity and with a beam less than 32.25 metres is not doing well at the moment. The prospects of any significant change are not good, as cascading takes its toll and more efficient and cost-effective ships make their way down through the trading lanes. Current daily charter rates are between USD 4,600 and USD 9,400 per day for ships with a capacity ranging from 700 TEU to 5,300 TEU. For the larger ship sizes, wide-beamed 5,000 TEUs and those with higher capacity, charter rates are stronger, but still not impressive. 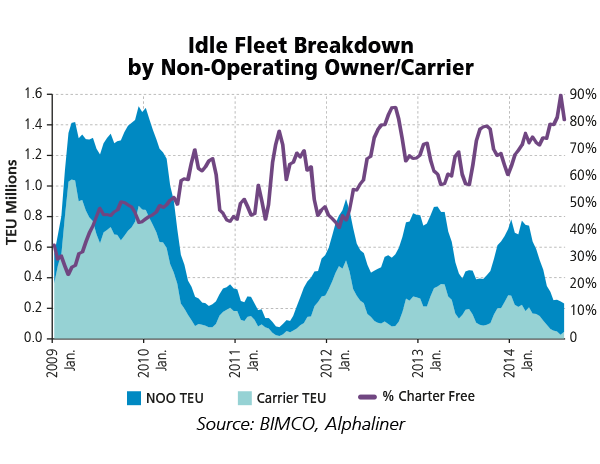 The optimism in the freight market is reflected by the redeployment of idle ships into active service, in particular those with a charter party attached. When looking at the supply side growth in 2014 so far, the reintroduction of tonnage must also be considered as part of the equation. This has added another 540,000 TEU to the newbuilt deliveries before subtracting ships sold for demolition. According to Alphaliner, 119 ships with a combined capacity of 230,900 TEU were idle as at 28 July.

For the full year 2014, BIMCO expects ships with a combined capacity of 500,000 TEU to be sold for demolition. This is why BIMCO believes that idling is a very effective, but also temporary, tool to adjust the deployed fleet growth up as well as down. Year-to-date scrapping amounts to 305,000 TEU. 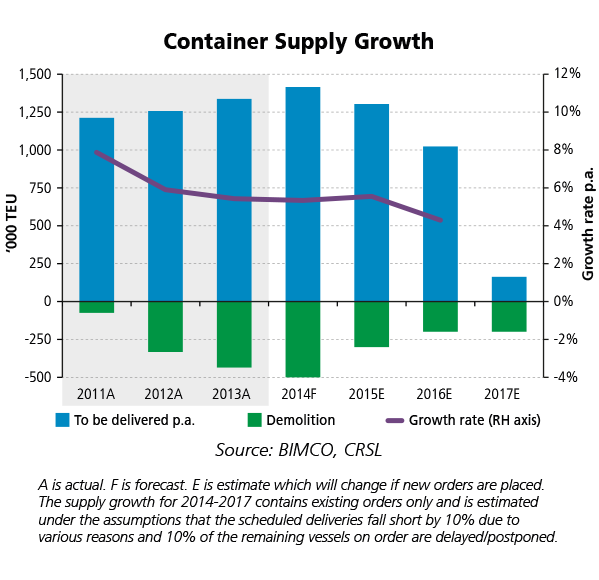 Year-to-date, 997,000 TEU of new containership capacity has entered the fleet. BIMCO forecasts a six-year-high on new ship deliveries, amounting to a bit more than 1.4 million TEU. As the record scrapping level takes its toll, BIMCO expects the fleet growth to be 5.3% in 2014. The scrapped ships were, on average, built in 1992, but range from 1973-1999 (average capacity 2,610 TEU). To put the future demolition potential into perspective, only 553,000 TEU (3.1% of the total fleet) of the active fleet is more than 20 years old (built up to and including 1993). For 2015, the expected scrapping level is lower, which in turn could result in a higher fleet growth.

So far, in 2014, 41 ultra large containerships (ULCS), each with a capacity beyond 10,000 TEU, have left Far Eastern shipyards, topping last year’s delivery number of 34. With another 14 expected to be delivered, we could see a new record of 55 ULCS, equal to 730,000 TEU, bound for the Far East to Europe trading lane. The challenge to strike the balance in matching supply to demand stays unchanged. Fifty-three ULCS are scheduled for delivery in 2015. The average size of the ULCS are a staggering 15,030 TEU. In November and December this year, the first two of China Shipping Group’s five ships with a capacity of 19,000 TEU are set to become the world’s largest container ships.

The only thing not getting bigger and bigger right now will be the order book, falling from 3.6 million TEU two months ago to 3.3 million TEU in early August. The lower contracting activity is positively affecting this number. “Only” 552,000 TEU of new capacity has been contracted so far this year. For 2013 as a whole, no less that 1.9 million TEU was ordered. The two new building trends identified in our last report remain on track. The low level of new contracts continues, with no new orders for +10,000 TEU ships placed since April. Moreover, the absence of contracts for new ships between 2,500 TEU and 9,400 TEU still holds.

OUTLOOK:
Going forward, the profile of the new ships that are delivered into the active fleet will lead to continued cascading of the less optimal ships for a given trade.

The peak season is upon us again and it is off to a good start on all the key high capacity/volume trading routes out of the Far East. On 1 August, freight rates went higher, as supply matched the demand situation well. BIMCO expects the spot freight rates to resist last year’s constant slide from early August to end-October on Far East to Europe. The Far East routes to the US West Coast and US East Coast seem exposed to a gradual deterioration of freight rates as the peak season passes by and winter service programmes for the liner operators picks up. All of this is subject to solid demand growth in Q3.

While the Transpacific Stabilization Agreement does provide a more stable supply of ships and a more stable freight rate environment on the trades it covers, the anti-trust regulation on trades into the EU tends to develop the opposite. However, operators have proved this year that volatility is not a prerequisite. Practice sometimes makes perfect, and the balancing act has engendered a situation today where idling is at a three-year low point, 41 new ULCS are deployed and freight rates are buoyed beyond the break-even point.

In spite of the above positives, serious overcapacity remains, and the non-operating owners with smaller ships feel that in the charter market on an everyday basis.

Contact online
BACK TO: Largest Chinese trade surplus ever recorded in July NEXT: Macro Economics - Take nothing for granted; we need reforms to improve economic performance