Demolition prices have been on the rise since late last year and recently reached the same high levels seen in the beginning of 2012. In two of the major demolition markets, India and Pakistan, the positive development started around October 2013 after a year of more or less status quo. In China, also a large market for demolition, development has been the opposite, with slowly declining prices since the beginning of 2013.

DEMAND:
As expected, Q2 has turned out to be less “action-packed” than Q1. For all tanker segments, rates have side-stepped, with a few noticeable exceptions. Handysize product tankers lost steam unexpectedly and fell to USD 5,000 per day, whereas in the final weeks of May, Suezmaxes firmed to reach USD 22,000 per day. Finally, VLCCs disappointed – slipping below the USD 10,000 per day mark to end seven significant months with average earnings at USD 30,081 per day from October to the end of April. 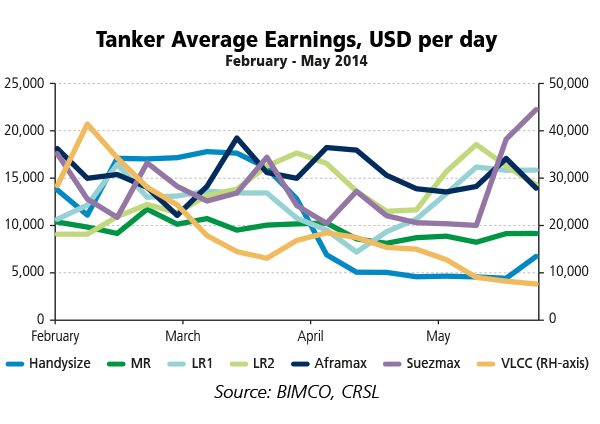 The tripling of gasoline imports, primarily into the US East Coast during April and May as they prepared for the “driving season”, once again failed to change fortunes in the Handysize/MR segment. Perhaps this once so important season is no longer relevant, with quickly changing trades originating from the export of US oil products.

The export of crude oil from Africa is at the epicentre of the crude oil tanker markets, partly due to the lack of Libyan supply and partly due to lack of US demand. Longer hauls from West Africa to Europe that have stepped in to bridge the gap that has opened up by the loss of short-haul cross-Mediterranean crude oil shipments have been positive for the market. On the other hand, the loss of US demand has been significant, with a sharp decline since 2010.

For Asian demand, the only way is up. So far in 2014, crude oil exports from Africa are up by more than 200,000 barrels per day (bbl./day) compared to 2010 levels, approx. 10%, according to EIA. Higher oil demand and China’s quest to diversify its sources of supply have made this trade lane more important. During January-April 2014, China has moved to the top of the list of African crude oil importers, taking 22% of all, equal to 1.2 million bbl./day. The above developments translated into a dynamic and positive crude oil tanker market earlier in the year. Going forward, the development on these trades will decide the prosperity of the market. 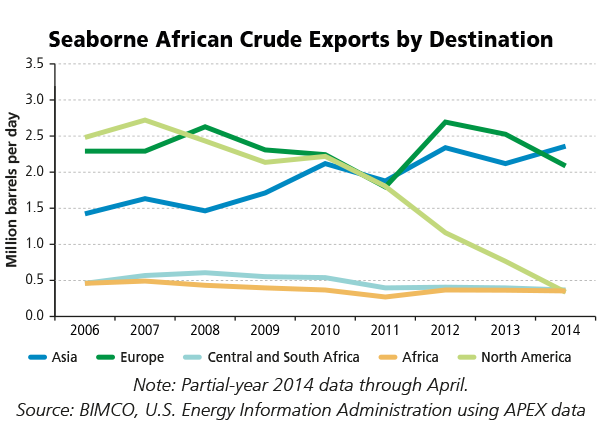 SUPPLY:
Demolition prices have been on the rise since late last year and recently reached the same high levels seen in the beginning of 2012. In two of the major demolition markets, India and Pakistan, the positive development started around October 2013 after a year of more or less status quo. In China, also a large market for demolition, development has been the opposite, with slowly declining prices since the beginning of 2013. 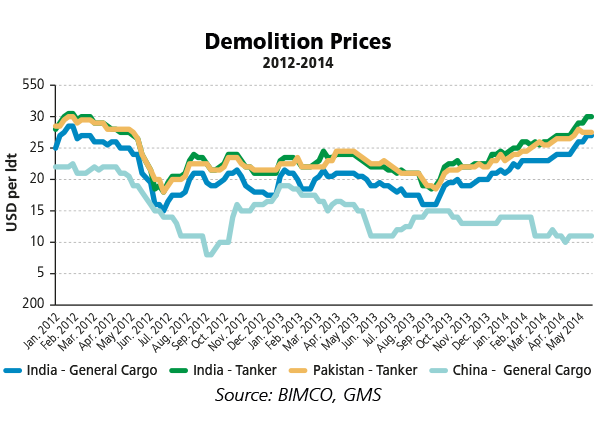 In India, the Rupee has traded below INR 60 against the US Dollar for some weeks now, fuelling the end-buyers’ desire to fill their pots. The strengthening of the Rupee follows the election of the pro-business candidate Mr. Narendra Modi, which has sparked even more optimism in the market. Even tankers, which normally go to Pakistan, are being cleaned now to comply with the safety restrictions at India’s ship recycling yards. This goes on as owners aim to take advantage of the substantial premiums on offer in India, where the price tag right now is USD 500 per LDT. A steady flow of ships to be demolished has meant a firming market so far this year.

Contributing to the filling of the vacant 2016 slots at the yards have been the 41 new product tanker orders (2.6 million DWT) signed in the first five months of 2014. During the same period last year, as many as 127 units of 8.4 million DWT were ordered; quite a cooling of the once red-hot market. There is a clear sign from freight rates that hesitate to pick up as well as a feeling that most of the upside in this segment may already have been captured by the orders placed last year at lower newbuilding prices. 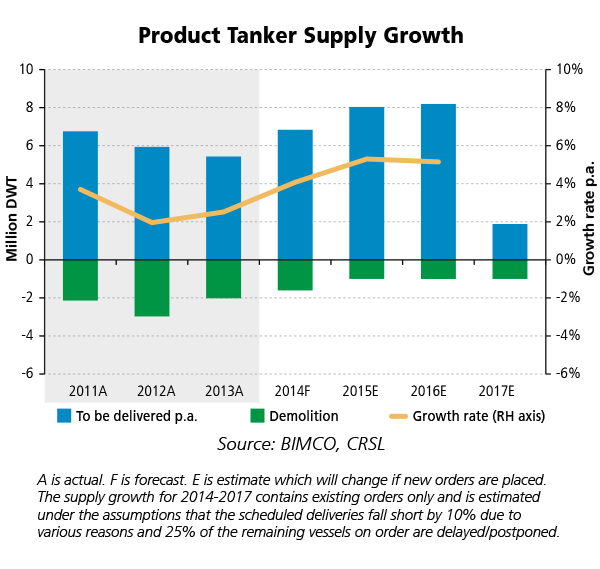 Fleet growth in the crude oil tanker segment has now slowed on a year-to-date basis by -0.1%. Contributing to this on the demolition side has been the sale of five early 90s built VLCCs for demolition.

OUTLOOK:
As the freight market still fails to deliver, the ordering of new MR ships has also fallen off a bit. Newbuilding prices have hardly moved in 2014, with the price for a South Korean-built MR currently at USD 37 million as compared to a Chinese build quoted at USD 34 million. 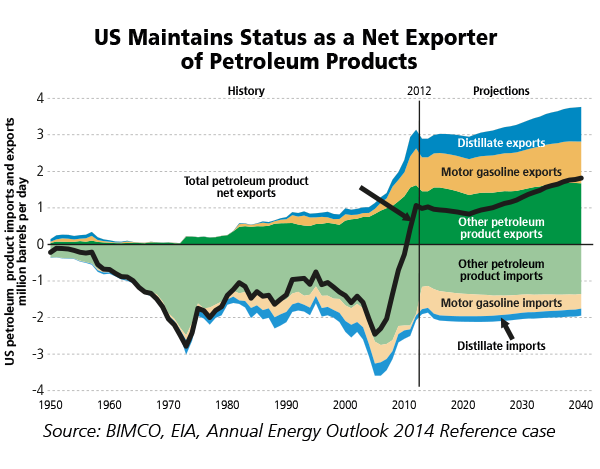 As regards the US crude oil net import situation going forward, the gap will narrow further in the coming years, according to EIA. Moreover, EIA expects an unchanged level of imports from 2016-2040 at around 5 million barrels (mb) per day – quite a change from 2004-2007 where the US net imports of crude oil peaked at 10 mb per day.

For June/July, BIMCO expects earnings for all the three crude oil tanker segments to stay in the region of USD 10,000-20,000 per day.

Contact online
BACK TO: Container Shipping - High level of business adjustments ongoing as the industry intensifies the hunt for profitability NEXT: Better service to the shipping industry