During the past eighteen months, a couple of trends seem clear in the freight market for container shipping. Primarily, the demand for imported containerised goods in Europe and US is going up, reflecting the clearly improved economic development. Secondly, the vessels become larger and larger as the quest to lower unit costs is high on the agenda everywhere. Thirdly, the major freight rate volatility is mostly on European-bound containers.

DEMAND:
During the past eighteen months, a couple of trends seem clear in the freight market for container shipping. Primarily, the demand for imported containerised goods in Europe and US is going up, reflecting the clearly improved economic development. Secondly, the vessels become larger and larger as the quest to lower unit costs is high on the agenda everywhere. Thirdly, the major freight rate volatility is mostly on European-bound containers.

The very stable freight rate conditions on the trans-Pacific trade lane from Shanghai to the US West coast is developed on the back of firm demand. BIMCO data on inbound loaded containers for the period of January-April shows demand growth at 3.8%, as compared to 3.0% during the same period last year. Average freight rates, however, have not been able to improve; they are down by 16% from USD 2,296 per FEU in 2013 to USD 1933 per FEU in 2014. 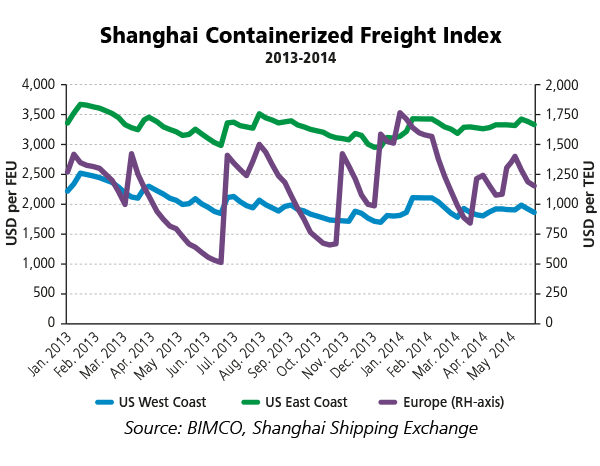 Turning to the volatile battle-ground on the Far East to Europe trade lane, where the ultra-large containerships are fighting for turf, the growing demand (and the strict focus on the supply side) has been able to deliver higher freight rates. For the first five months of 2014, the freight rate from Shanghai to Europe has improved by 21% compared to last year, according to the Shanghai Shipping Exchange.

Demand for second-hand tonnage seems to be going slightly down from the 197 deals done last year. Eighty-four deals have been done so far in 2014 and the current appetite does not seem to be overwhelming. What is overwhelming though is the number of German sellers – 50 ships out of the 84 ships. While Greece tops the buyer’s list with 17 ships, Norway is second, taking 14 ships. This continues the trend from 2013, where 120 ships out of the 197 sales had a German seller involved in the deal.

It remains important to recognise that the market is not completely awash with ships labelled for sale and deals are done carefully to avoid a fire-sale that could drive asset values sharply down, not just on ships for sale, but for the entire fleet.

SUPPLY:
In terms of both newbuilt deliveries and demolition of tonnage, 2014 is running quite fast. Whereas the delivery side has only been slightly faster than expected, the pace of demolition has been close to double that of the anticipated speed. Thus, BIMCO updates the outlook for volumes set for demolition during the full year of 2014 to 500,000 TEU (the previous estimate was 290,000 TEU) to reflect the challenges created by oversupply and ongoing cascading. The estimates for future years have likewise been adjusted. 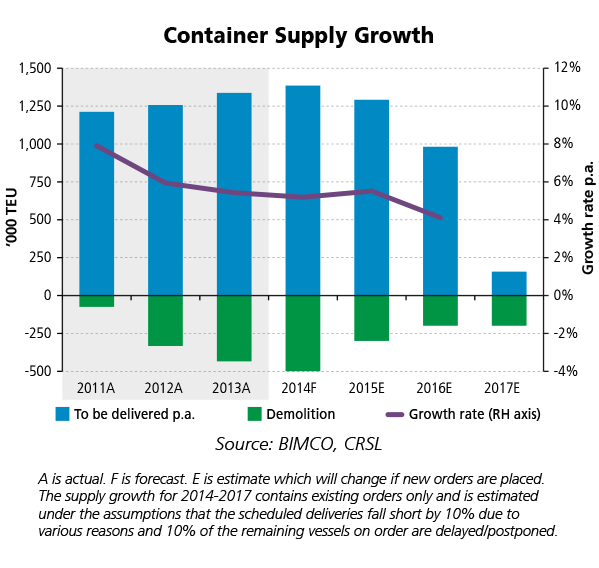 BIMCO continues to expect the container shipping industry to steer itself along the lines of the “new normal”, where a demand growth of 5-6% must be matched by an equivalent supply growth. There will be no more double-digit growth figures as in the past decades. For 2014, the fleet is expected to grow by 5.2% – a low level not seen for 15 years.

The low level of new contracts being signed at the shipyards is another indicator of a hard-hit industry that focuses fiercely on cutting unit costs, optimising networks and prepare for a slow-steaming future. Little more than 500,000 TEU has been contracted, valued at USD 4.8 billion.

No ships have been contracted within the range of 2,500-9,400 TEU in 2014. Being a window into the future, contracting activity signals an extreme focus on hub and spoke networks, as well as a flight from “mid-sized” ships, with 87% of demolished tonnage been in this size-range too. 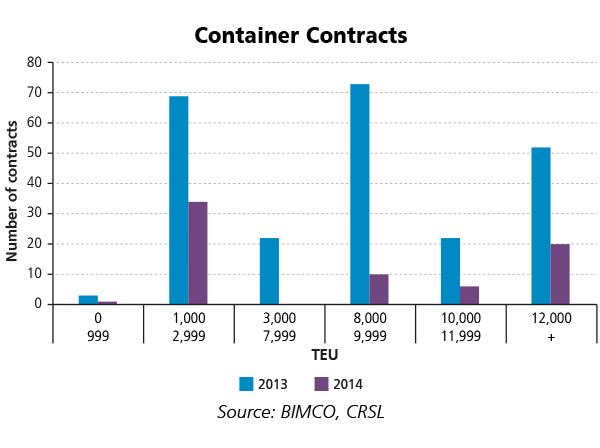 OUTLOOK:
Going forward, the financial health of the owners and operators in the container industry will attract increasing attention. With direct consolidation being absent, the troubled industry is likely to seek new ways to improve earnings at a point where it is necessary to bring back profitability beyond the level of survival. Owners also need to invest in the future if they want to be a part of that; not just in ships, but also in ports, in partnerships and in optimising existing networks to fit the current – and not least future – demands of customers.

The financial health of the shipping banks also remains in focus. Many ship owners continue to find it difficult to obtain the credit and financing needed to run and grow a smooth business as margins go higher and availability seems to tighten for the non-giants and those with weaker balance sheets. Make no mistake though, it is unlikely that there will be money “missing” in the industry – it just comes at a higher price and perhaps with unfamiliar strings attached, different to what used to be industry standard.

The delay in the Panama Canal expansion is not doing the business any good either. It simply prohibits operators from deploying more efficient and cost-effective tonnage on a route that sorely needs it. As a result, the traffic via the Panama Canal to service the US East Coast has seen increased competition from the Suez Canal and the +8,000 TEU ships. Taking advantage of economies of scale by employing a larger ship and being able to fill her up has turned the once straight-forward thinking in route planning on its head. The scheme heightening the Bayonne Bridge in New York will be completed in 2016, further strengthening competition.