The recovery in the advanced economies continues to strengthen as fiscal consolidation is slowing down and investors are less worried about the debt situation. We have seen this with several southern European nations now being able to tap into the financial markets once again at interest rate levels signalling improved health.

Global economy:
The recovery in the advanced economies continues to strengthen as fiscal consolidation is slowing down and investors are less worried about the debt situation. We have seen this with several southern European nations now being able to tap into the financial markets once again at interest rate levels signalling improved health.

After the setback in 1Q 2014, the US appears back on track “pulling the world” boasting the strongest recovery amongst the nations which were hit the hardest by the financial crisis. The strongest European nations move forward fast, whereas the southern-most nations need to keep walking, as much work still needs to be done, despite the return of positive GDP growth rates.

Emerging and developing economies are doing well and growing solidly, supported by increased import demand from advanced economies. They are, however, not sheltered by the effects stemming from the “normalisation” of interest rates and quantitative easing in e.g. the US, where capital outflows have now become smaller or even reversed.

US:
For the first time since 2011, the US economy has suffered the first setback on its road to recovery. In its “second” estimate, the Bureau of Economic Analysis estimate a decrease in the US economy at an annual rate of 1% during the first three months of 2014, down from an estimated growth of 0.1% in the “first” estimate. 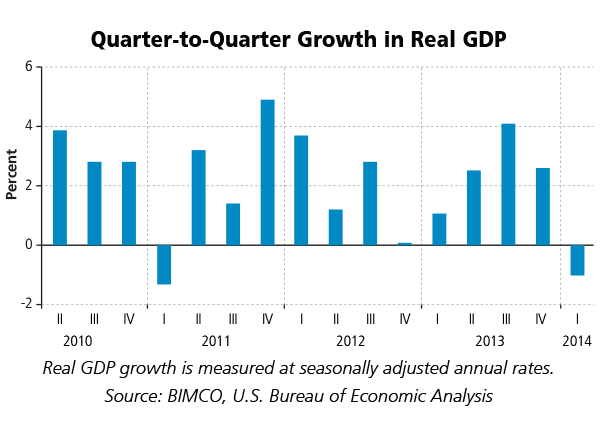 There are strong indications that the economy is still on the right track and this quarter was just a bump in the road. Personal consumption increased by 3.1%, a small improvement from the first estimate. Another source of optimism is the job market, where the number of Americans applying for unemployment benefits is the lowest since 2007. The number of initial jobless claims in the week ending May 31 was 312,000; 8,000 more than the week before, but the level has now come down to where it was pre-crisis in 2007.

The US flash services PMI went from 55.0 in April to 58.4 in May, indicating that the service sector is expanding at an accelerated pace. The manufacturing PMI also increased from 55.4 to 56.4, lifting the composite PMI for May to 58.6, the highest rate of output growth since April 2010.

The FED continues to trim its economic stimulus and its monthly bond purchases are currently around USD 45 billion, down USD 10 billion from two months ago.

Asia:
In India, the landslide election victory of the favoured pro-business candidate, Mr. Modi, is hoped to be the turnaround the Indian Economy needs. Two years ago, the growth rate in India was around 8%. In the first quarter of 2014, the economy grew by 4.6%, just as it did in the previous one. In developed economies this would be considered very good, but not in a developing economy like India.

Following five months of deteriorating business conditions in the manufacturing sector in China, a corner was turned, as the Purchasing Managers’ Index (PMI) improved in April from 48.0 to 48.1, and built on that strength to go higher in May (49.4). While the overall index is still not in expansionary territory above 50, the “New export orders” sub-index made a jump into the positive zone to reach 53.4, a 4-year high.

The overall cooling of the real estate market (which is red-hot in e.g. Shanghai) continues on the back of previous restrictions made to do just that. However, the pace of it is now being gently balanced, with exemptions given on purchasing and financing as the overall economy is losing steam faster than expected by central authorities. A smoothly running real estate market is vital for the Chinese economy and the utmost care must be taken while cooling it slowly down.

In Japan, the sales tax increase (from 5% to 8%) has slowed down economic activity as expected. This also led the IMF to lower its growth forecast for Japan, citing the tax hike as one of the main reasons. The Japanese economy, now projected to grow by 1.4% this year as compared to the 1.7% expected earlier this year, is still waiting to be lifted fundamentally by the implementation of structural changes to the economy by PM Abe.

EU:
Inflation dropped unexpectedly in May to 0.5% from 0.7% in April, putting pressure on the European Central Bank (ECB) to take action. On 5 June, they did just that by introducing an unprecedented negative interest rate on deposits to encourage lending. Going forward, further liquidity injections could be applied too, as ECB President Mario Draghi warns of the risk of a negative price spiral.

Why is deflation so bad? According to the IMF because it is both a symptom (when you see deflation, you know the economy is depressed and you should do something about it) and a cause of economic ill-health (e.g. the dynamics of debt becomes worse). It risks becoming a bad negative loop where deflation slows down demand leading to more deflation. In short, it must be avoided.

This is opposed by the positive development in Spain, where an increase in household and government spending contributed to a growth of 0.4% in GDP during Q1 over the previous quarter. The Spanish economy is now growing twice as fast as the Euro region average. Rating agency Standard and Poor’s has revised its 2014-2016 growth projection for the Spanish economy from 1.2% to 1.6% and subsequently upgraded its rating from a BBB- to BBB. This is quite an achievement for an economy which has been in recession since 2011. 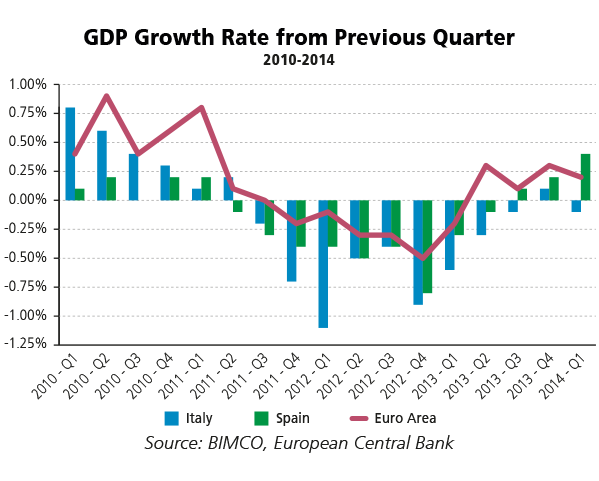 While Germany stays firmly in the driving seat for growth in the Euro area, France remains a major drag on the region’s revival, according to Markit. Another downturn in French GDP is possible if business conditions continue on the current path. As regards job creation, the pattern is the same, highlighting the ongoing challenges for Europe.

Outlook:
The European Commission forecasts real GDP growth in 2014 of 1.2% in the Euro Zone, moving up to 1.7% in 2015. For the EU as such, growth is seen somewhat higher. Bearing in mind that the EU went through a double-dip, the current optimism is centered on a more balanced growth picture. This includes even the most vulnerable member states.

The entire shipping world is closely following economic developments in China, as everyone tries to imagine the form and magnitude of China’s future shipping demand.

Only time will tell, but can any other economy become more dominant than China’s one right now? It is hard to imagine.

Some of the negative effects that were a drag on the US economy in Q1 are likely to boost it during Q2; in other words, BIMCO expects the US to be “back on track”.

Contact online
BACK TO: Dry Bulk Shipping - The pressure is easing in the Atlantic, but overall improvement is quite slow for now NEXT: Container Shipping - High level of business adjustments ongoing as the industry intensifies the hunt for profitability