Global oil demand is seasonal, with Q1 being the weakest season – again, leaving only upside for the remainder of the year.

DEMAND:
The spike in VLCC earnings that began at the end of 2013 continued into 2014, hitting the highest levels since 2010. Suezmaxes and Aframaxes enjoyed the ride too. The Winter strength in the crude oil market is a result of a rise in oil demand from the fast growing economies of Asia. The ride has been a very turbulent one and the fluctuations have meant earnings dropping from record highs to lows, only to climb to the same levels again shortly afterwards. This is common for VLCC rates, especially around the Chinese New Year. VLCC rates now appear more stable, albeit steadily declining since mid-February.

The first quarter was disappointing for product tankers, with a flat rate environment. Despite holding on to the gains achieved in Q4, all product tanker segments from Handysize to LR2 have had to settle for USD 10,000-17,000 per day right now. This is slightly higher than expected and comes down to the steadily improving market. 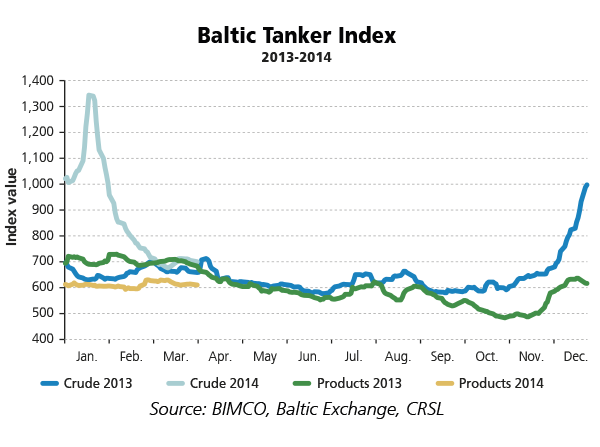 The Winter months in the US were extremely cold this year; colder not only than last year’s Winter but also than the previous 10-year average. The cold snap affected the US oil market, mostly domestically, sadly with little effect on the international product tanker market. In the North East where 27% of households use heating oil, the Winter was 11% colder this year. As demand for propane soared the most, the heating oil market did not become tight. As US distillate stocks (including heating oil) have been leaner in the past year, a huge drive which would boost seaborne import to restock does not seem to be on the cards.

Overall, US oil consumption increased by 2.1%, or 380,000 barrels per day (bbl/d) in 2013, to reach 18.9 million bbl/d. Consumption was driven forward by hydrocarbon gas liquids (which includes ethane, propane, butane and natural gasoline) where consumption grew by 6.2%.

Particularly relevant for the product tanker market was that motor gasoline consumption experienced the largest increase since 2004, when highway travel surprised on the upside during H2-2013. Consumption grew by 1.1% to reach 8.8 million bbl/d. Unfortunately that did nothing good for the product tanker market, as gasoline imports in Q4-2013 and Q1-2104 were at a record low. 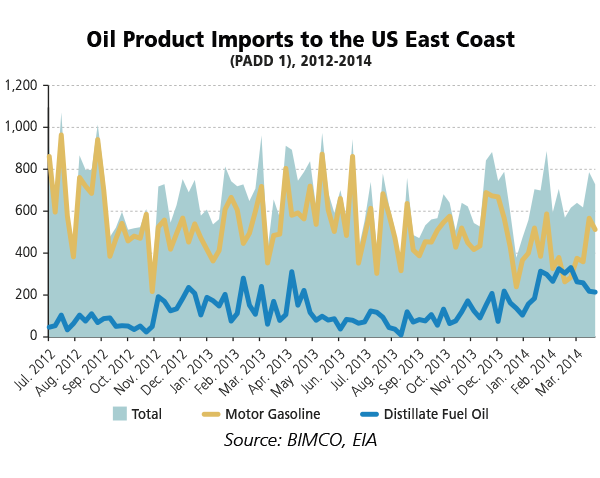 SUPPLY:
While BIMCO is forecasting a four-year high for delivery of newbuilt product tanker tonnage, very few ships are being sent to the breakers to counter the influx. There have been just seven ships in total, with six of them being below 40,000 DWT and two of those also being single-skins. Owners are displaying a rock-steady belief in a strong product tanker market just around the corner.

Looking at crude oil tanker capacity, the fleet has only increased by 0.2% since 1 January, despite delivery of six new VLCCs, as demolition took its toll too. Only two Suezmaxes and zero Aframaxes entered the fleet, signalling the effect that the extremely poor freight markets of recent years have had on the appetite for placing new orders. For the remainder of 2014, 25 VLCCs, 19 Suezmaxes and 14 Aframaxes are scheduled for delivery. BIMCO expects an average of one year postponement/delay of 25% of the scheduled order-book especially to ease the VLCC pressure somewhat.

Last year, Aframaxes saw a twelve-year low delivery level at just 18 new ships. This caused the fleet size to shrink for only the second time since 1985.

Whichever way you look at it, 2014 will be the year of the MRs. Last year, 74 new MRs were delivered – year-to-date deliveries have already reached 19 by mid-March. In the size range of 40,000-60,000 DWT, 270 product tankers are on order, of which 93 are scheduled for delivery in 2014. BIMCO expects actual deliveries to fall short of scheduled ones.

As regards the entire product tanker order-book, it has actually dropped down to 406 units at end-March, from 420 units two months ago.

In January and February, new orders for 12 VLCC have been signed, all for 2016 delivery. Last year, 49 were ordered of which 29 were placed in December. The tide is definitively turning for VLCCs since the ordering drought in 2011/2012. Another example of more confidence being around is the re-sale of seven VLCCs orders, placed in South Korea in December 2013, all due for delivery in 2016 and booked at a price tag of USD 93 million. The resale price of USD 100 million confirms both the increased optimism in VLCC tanker market as well as owners opposite expectation for the future. 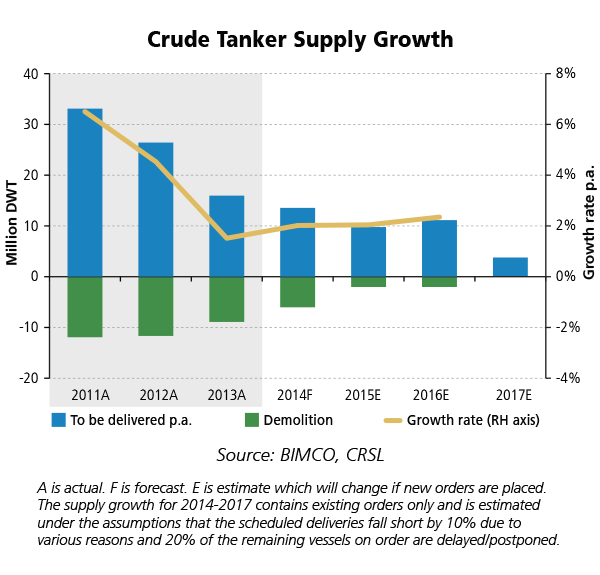 OUTLOOK:
Global oil demand is seasonal, with Q1 being the weakest season – again, leaving only upside for the remainder of the year. During the first years of the recent crisis (2010/2011), Q2 was the weakest quarter, while Western demand heavily depressed making the Eastern seasonality dictate global oil demand.

In Q2, lower oil demand, primarily from Japan, is the main driver behind this. Lower jet/kerosene and “other gasoil” demand is set to be felt, as oil product demand enters a couple of weak quarters in Japan. Refinery throughput in Japan is also low in Q2. Fortunately, Chinese and Indian demand for crude oil from West Africa is on the rise, as the price of Nigerian and Angolan crude is favourable to Middle East crude oil (Dubai benchmark). This provides more ton-miles primarily to the VLCC segment.

The tension around the Russian annexation of Crimea has not affected the oil market so far, as Ukraine is not a transit country for Russian-origin oil sold to the West.

According to EIA, OECD Europe received as much as 36% of its net crude imports from Russia, which in turn relied on Europe for 71% of its crude exports in 2013. Should trading with Russia be affected, oil product imports into Europe is the likely solution, with Russian crude export going East instead.

As the energy intensity of global economic growth is slowing down, changes in economic activity will translate differently into oil demand growth than during the past decades. However, a significant economic step forward (+3.7%) as we expect for 2014 is currently estimated to result in a 1.5% higher demand for oil (IEA forecast).

For April/May, BIMCO expects earnings for the all the crude oil tanker segment to stay above USD 10,000 per day. VLCC may go as high as USD 25,000 per day, while Suezmax crude oil carriers could be reaching USD 22,000 per day with the Aframax crude segment expected to peak around USD 20,000 per day.