DEMAND:
Consumer spending in the US rose to a three-month high in February, pointing towards improved trading conditions on the trans-Pacific trade lane today and going forward. At the same time (end-March) freight rates went up on the Far East to Europe trade lane, indicating that demand from a slow-growing Europe is also about to pick up and bring support to higher freight rates going forward.

After growing by 3.9% for the full year of 2013, imports of containerised goods from Asia to Europe grew by 8.3% y-o-y in January. If the macroeconomic environment plays out as we currently expect it to do, global container shipping demand should increase by 5-6% in 2014.

On the other vital trade, the head haul trans-Pacific one from Asia to US West Coast, volumes fell by a two-month accumulated 2.8% in January-February following a full year growth of 2.0% in 2013 as a whole, according to BIMCO data. March is likely to hand us a more “correct” idea of the development, when the Chinese New Year seasonality has been taken care of. 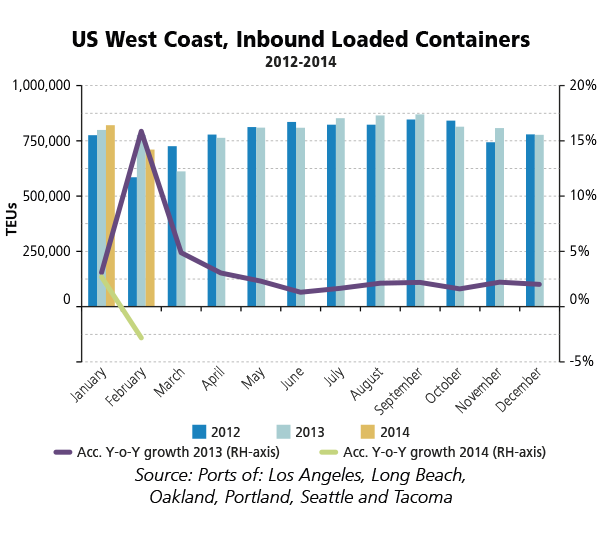 While the demand side is doing fairly well, the supply side of the market is where the trouble lies. A quick look at the charter market reveals that, according to Harper Petersen & Co., ships with a capacity between 1,100 TEU and 3,500 TEU have been going through very tough times since early 2012. Charter rates of around USD 5,000-9,000 per day cover little more than OPEX and leave little, if anything, for interest and capital repayment, if the vessel is chartered out at all. The oversupply naturally results in very short-term time charters. This is simply because no owner wants to make a long-term charter at current very low rates.

SUPPLY:
The container shipping industry is applying the tools that are available in the toolbox on an individual basis to manage capacity. In addition to the constant optimisation of networks to make room for more efficient ships to enter the trades (cascading), a new record in demolition was set at the end of February. Seven sisters built in 1996-98, each with a capacity of 5,300 TEU, are the biggest containerships ever sold for recycling. The sale, to breakers in India and Pakistan, returning a healthy USD 470 per LDT to the owner, equal to USD 12.2 million per ship.

As much at 160,456 TEU has already been demolished year-to-date. A “witness to the truth” that tells the story of a continuously extremely difficult freight and charter market. The total of demolished capacity since 1 January 2012 will exceed one million TEU during April 2014. 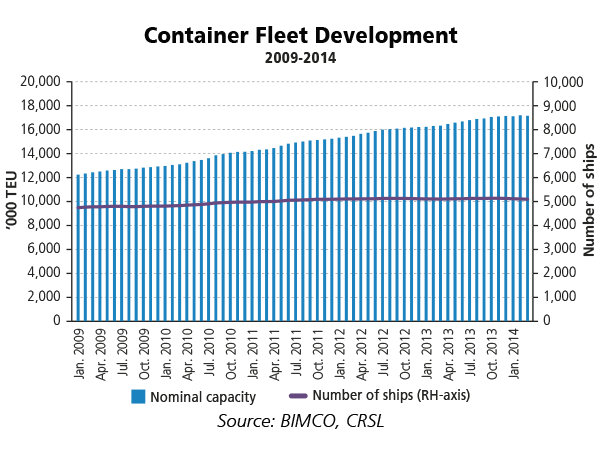 The active fleet fell in numbers but gained in capacity due to larger vessels replacing smaller ones. Since 2009, nominal capacity has grown by 40%, while the number of ships has grown by only 7%.

The overhaul of the Far East to Europe trading lane continues in 2014, with the introduction of all newly-built deliveries with a capacity of 10,000 TEU or more. The average ship size on this main trading lane is already above 10,000 TEU. Twelve ships have been launched already, with 47 more scheduled for delivery. In 2013, 34 Ultra Large Containerships were delivered down from 51 in 2012.

The contracting of containerships seems to come in waves, where one year has been high and the next very low since the outbreak of the crisis. 2013 saw new contracts for 1.95 million TEU, hinting at 2014 being a modest year for contracting. However, activity in Q1-2014 does not really confirm this pattern, with ordering being on a par with Q1-2013. All new orders are for 2015 and 2016 delivery, as yards are still trying to fill the earlier slots and avoid signing for 2017 delivery. 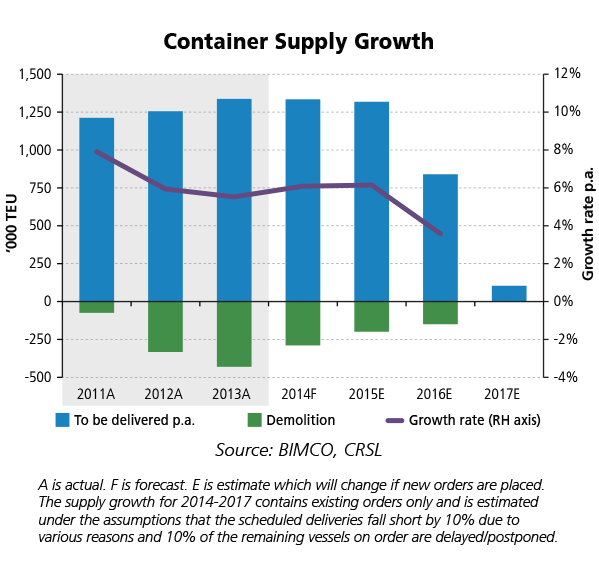 OUTLOOK:
For the time being, the number of strings from Far East to Europe/Mediterranean differs from quarter to quarter, as some strings are closed and new ones set up. According to Alphaliner, the number of strings in September was 22+16=38. This indicates the future use of 380 ships on these trades when the “new normal” lifts the service speed just a bit from current lows, requiring 10 ship on each loop. As per today, 208 ULCSs are sailing, with 141 being on order – out of which 12 have been ordered this year. Owners today opt to order a full string of ships, indicating that the era of ordering one or two ships at a time is over – at least for the participants wanting to play in the biggest arena.

Will orderings of ULCS stop once the “overhaul” is completed? That is highly unlikely for two reasons: 1) operators are already doing “trials” on Suez transits to the US East Coast – and the US ports are busy getting ready for this; and 2) the Panama Canal will be able to cater for ships with a beam of 49 metres from 2015/16, equal to approx. 13,500 TEU. So going forward, the rush to size up will continue.

Regardless of the harsh business conditions in the shipping market, 2014 seems to be stronger in terms of freight rates on key trade lanes. Broad scoped data from the Shanghai Shipping Exchange that takes into consideration not only spot rates but also long-term contractual rates from ten major ports in China (CCFI), reveals that the headline index was more or less flat (-1%), but the individual performances were more volatile. Indexed rates for boxes for Japan (+8%), Europe (+6%), Korea (+6%) and the Mediterranean (+16%) all went up in the first quarter as compared to the same period last year. On the other hand, rates fell for destinations such as Hong Kong (-17%), South East Asia (-9%), Australia/New Zealand (-12%), Persian Gulf/Red Sea (-12%) South Africa (-12) and South America (-19%). 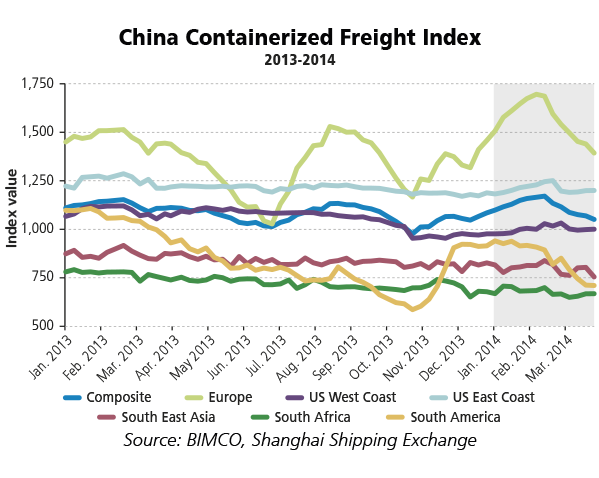 For US-bound cargoes, the freight rates development seems more stable than elsewhere, yet the stability results in falling rates in Q1-2014 y-o-y, with US West Coast down by 9% and US East Coast down by 3%.

A poor start of the year in terms of slow demand growth into the US affected this. Whether the weakness is only temporarily remains to be seen, but a couple of central questions remain. Is it because the upturn in the US economy is domestically focused or has the low energy prices in the US really delivered low cost goods that can compete with Far Eastern import? The coming months may shed more light on this, as 2014 develops.