As the recovery continues to move forward, the bumps in the road are both new “friends” and old “foes”. We are still concerned with the lack of inflation in both the US and Eurozone, as production capacity far exceeds demand.

Global economy:
As the recovery continues to move forward, the bumps in the road are both new “friends” and old “foes”. We are still concerned with the lack of inflation in both the US and Eurozone, as production capacity far exceeds demand. In the Eurozone, the European Central Bank (ECB) expect 2014 inflation to be 1%, lower than in both 2013 and 2015. Early indicators suggest that March was the low point of the cycle at 0.5%, coming down from 0.7% in February. Meanwhile the US, which is further down the recovery track, reached the low point of the inflation cycle in 2013, with higher inflation expected in both 2014 and 2015.

Another old “foe” is the quality of Chinese statistics. The nation that shipping is so dependent upon and from where the trading power is very clearly felt on the demand side of shipping, is a black box in terms of hard reliable facts on real economic performance. Meanwhile, we seek comfort in the political ability to deliver on official estimates, like 7.5% of GDP growth in 2014 as announced by Premier Li Keqiang.

As regards new “friends” – the unrest in Ukraine and growing tensions between Russia and the West represents a new downside risk for the global economy to set against the overall optimistic perception of global economic development going forward.

US:
Although the US data during Spring is a possible cause for concern, going forward as the fiscal policy tightening fades and consumer confidence remains healthy, the fundamentals should be in place for a self-sustained expansion of the economy. Continued low energy input prices to US production is another positive factor for the economy.

Consumer confidence data from Conference Board supplements the optimistic feel, with a six-year high figure for March at 82.3, and indicates that future job prospects are improving alongside the improvement of the overall economy.

While US imports from China keep growing in value, the pace of growth is slowing. In the first two months of 2014, imports, which are about four times as large as exports, grew by 1.3% y-o-y, suggesting a zero-growth level in February. However, caution needs to be exercised when analysing the data, as the Chinese New Year makes comparison difficult, but a no-growth level was still below expectations. 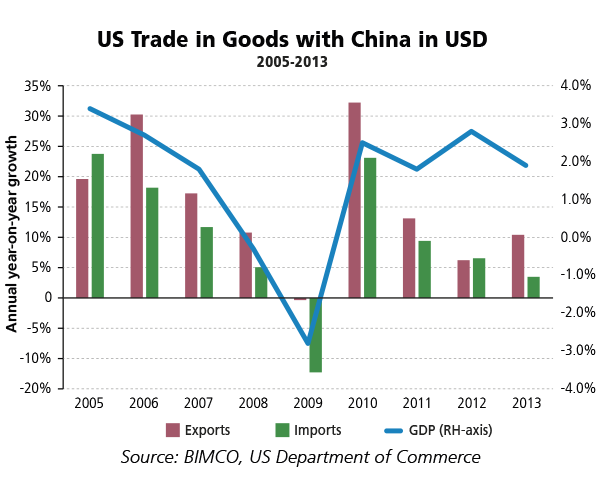 US Flash manufacturing PMI fell in March to 55.5 from the 45-months high in February, indicating slightly slower but still positive development, as business conditions continue to improve. The PMI sub-index on new orders indicates that demand is domestically driven, whereas new export orders barely grew.

Asia:
In Japan, inflation is still lagging behind the long run target of 2%, coming in at 1.5% in February. Following the 18% depreciation of the Japanese Yen against the US Dollar, corporate earnings improved considerably. Now it is time for that to spill over into wage growth to spur private consumption and keep the recovery on track. As imported goods have become more expensive and thus “boosted” inflation, wages must follow suit and go higher to create a positive inflationary circle. If that does not happen the recovery is likely to stall. In addition to that, the progress of the necessary structural reforms is very slow and faces strong resistance, despite the current favourable political situation in Japan. 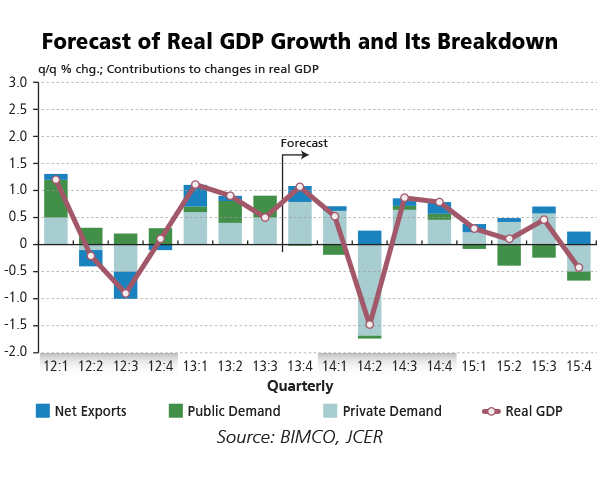 In India, policy-tightening measures focused on meeting budget deficit targets which will hold back public spending and be a drag on economic growth. The upcoming election has put tightening on hold for a while, with money spent on popular subsidies rather than on much-needed infrastructure investments.

The Indian general election will take place from 7 April to 12 May 2014, with the result declared on 16 May. There is a need for much policymaking and improvements to inefficient bureaucracy to change the fundamentals for this giant nation with such a huge potential to influence the shipping markets. Those changes will probably be put on hold through the election period.

EU:
France was the positive surprise in the March figures on Eurozone Flash composite PMI. Coming in at a 31-month high, surpassing the 50-threshold level for only the second time since mid-2011. The improvements were broad-based, with the biggest change, very positively, seen in output and new orders.

Despite a slowdown in German output, the nation remains the backbone of the Eurozone economy and epicentre of recovery.

On a broader scale, positive signs are coming from many different places. Unemployment seems to have peaked, which is something that supports private consumption going forward. The yield on long-term bonds in Spain and Italy is now coming down to 3.6%

The recovery in the Eurozone is being helped along by a strong economic performance from key trading partners such as the UK and US. Another top trading partner, Russia, is likely to become a minor drag on economic expansion, as the Crimea crisis begins to affect trade.

ECB seems to believe that the recovery has gained enough of a foothold to refrain from further stimulus. Moreover, inflation should pick up soon, as demand becomes strong enough to put a bit of pressure on capacity. If this should prove not to be the case, we trust the ECB to take decisive action in order to bring the recovery back on track.

Outlook:
Starting 1 April, the Japanese sales tax will rise from 5% to 8%. Following a drop in household spending in February of 1.5% y-o-y, the March figures should rebound, as we expect spending to go up prior to the tax hike. The coming months, on the other hand, are likely to become softer for Japanese household spending. The big question mark remains how much softer – as the stimulus-driven recovery is still fragile.

Going forward, the key downside risk remains the unlikely event of a hard landing in China, supplemented right now by the growing tensions between East and West related to the developments taking place in Ukraine. Should these risks materialise, they will negatively affect the global recovery and weaken the emerging markets.

China expect trade growth for the full year of 2014 to hit 7.5%, slightly down from last year. With a relatively poor performance in the first couple of months, we should be in for stronger trading in the remainder of the year. The importance of China to the shipping market is second to none; all mayor shipping segments benefit. Crude oil imports are up by 11.5% y-o-y in the first two months and seaborne iron ore imports up by 21.8 % in the same period.

As of 3 April, China announced a stimulus plan targeted on keeping the economy on its planned growth path. The plan is designed to boost investments in railways and other construction areas to keep up job creation.

If the weather was the key explanatory factor behind the weaker-than-expected US data in recent months, as some claim, we expect the FED to continue its tapering of the monetary stimulus, now at USD 55 billion a month.

Contact online
BACK TO: Dry Bulk Shipping - Capesizes stole the headlines; the bulk market is improving across the board NEXT: Container Shipping - A mixed market that holds a bit of everything is what meets the eye