Dry Bulk Shipping - Capesizes stole the headlines; the bulk market is improving across the board

Despite the year-on-year improvements, the complete lack of volatility outside the Capesize segment means that spot operators’ trading possibilities have been scarce.

DEMAND:
While freight rates for Capesize ships have fended off the talk of a slowdown in China in an impressive fashion, rates finally took a minor hit on the final trading days of March. As the strong sentiment eased, it caused a derivatives sell-off in its wake.

When comparing the performance of freight rates in the first quarter of 2014 to previous years, it becomes clear that the market is rising. In the first quarter, average freight rates are significantly up from the multi-year low Q1 rates in 2013. Capesize rates went up by as much at 167% at USD 16,198 per day, whereas the other three dry bulk sub-segments all improved by 50% on last year’s first quarter TCE average earnings.

Despite the year-on-year improvements, the complete lack of volatility outside the Capesize segment means that spot operators’ trading possibilities have been scarce. Time charter rates are steadily moving up, while spot rates are moving sideways. In the anticipation of an improving freight market going forward, owners and operator have increased their spot market exposure to take advantage of this.

Following the weakness around the Chinese New Year, Capesize spot rates bounced back surprisingly strongly from the USD 8,000 per day level in early February to deliver a March average at USD 22,000 per day. That performance also lifted the period market to highs not seen since 2010. Rates for 6-12 months’ time charters hit USD 30,000 per day during the second half of March. 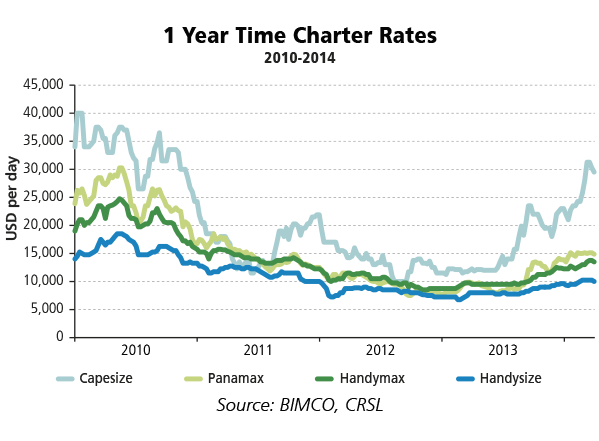 The South American grain season is at its height in April, May and June, with Brazil confirming its position as the world’s leading exporter of soybeans, with 45 million tons of exports. On the imports side, China is on the move in a big way, expecting to import 68.5 million, up by 15% on last season. China accounts for 80% of the incremental volume growth expected for the coming season, providing a lot of tons-mile into the market.

SUPPLY:
The fleet development in the dry bulk segments has been fully along the forecast lines, both for inflow of new ships as well as demolition. Despite the fact that we are seeing a five-year low level on new built deliveries, delays of delivery when measured against the “scheduled order-book” remain high at 30%.

Ordering activity went up by 258% in 2013 as compared to the year before. During the fourth quarter of 2013, more tonnage (31.7 million DWT) was ordered than in the full year of 2012 (24 million DWT). The stronger demand for new contracts also meant the newbuilding prices from all Far Eastern shipyards have gone up by 12-23% since the beginning of 2013. The larger the ship, the higher the increase has been.

Recent resale deals indicate that prices continue to rise on the back of strengthened optimism. At the end of March, four South Korean to-be-built Capesize ships for delivery in 2015/16 had a price tag of USD 60.5 million. This is the same price tag for Japanese built ships of that size, whereas the Chinese newbuilding is set at USD 53.2 million. 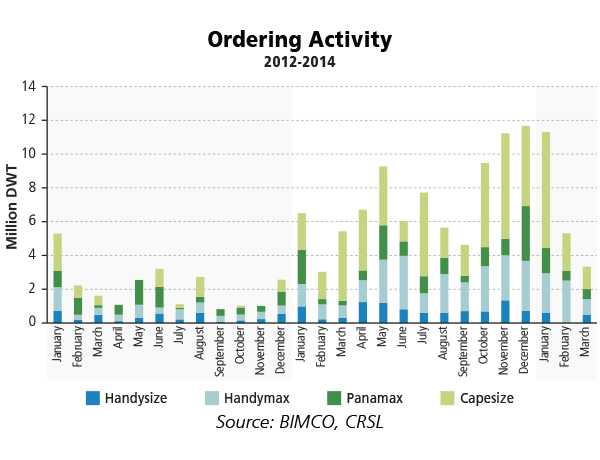 Regardless of much optimism in the overall sector, sales indicate short-term pessimism in the Panamax sector. Ships with a capacity of 80,000 DWT, built in China and delivered in 2014, come with a price tag of USD 23-24 million. The newbuilding price for same ship size and build for delivery in 2016 is USD 30 million The still-hectic delivery pace, at 3.5 Panamax ships a week, is part of the explanation for the discount on soon-to-be-delivered Panamax tonnage.

Following some frantic delivery years, the pulse of shipyard output is significantly down from the one-Capesize-ship-a-day of the peak years (2010-2012) to more normal levels, going forward at 2.5 ships per week in any given dry bulk sub-segment. 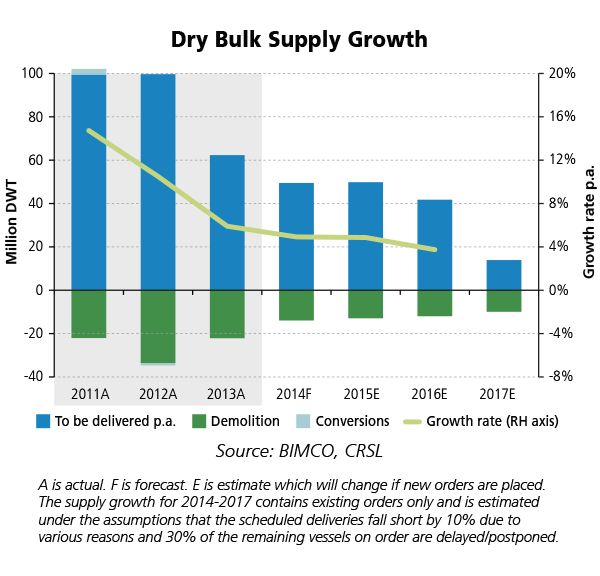 OUTLOOK:
2014 will be a year with full focus on the big mining companies, who are ramping up the production of iron ore by as much as 170 mill tons in 2014. This flooding of the market has already brought ore prices down from USD 130-140 during H2-2013.

The iron ore price dropped to USD 105 per tonne by mid-March. Such a low level was not expected prior to 2015. At the end of March, prices had rebounded to USD 112 per tonne. The undershooting of the price is linked to the continued weakening of the Chinese manufacturing sector, a slower growth in steel production and the still-softer GDP growth seen in China. Going forward, the higher focus on bringing down the environmental cost of development in China should increase demand for high quality seaborne imports from Australia and Brazil. This will diminish domestic production of lower quality ore that requires more energy to process. This development is in line with previous BIMCO market assessments forecasting lower commodity prices that will create demand, which will primarily favour the bigger ship sizes.

Exports of thermal coal from Columbia are likely to increase by 3 million tons a month going forward, following the eventual lifting of the ban in Columbia that has been holding back shipments from major export ports. Effective from 1 January 2014 in an initiative to reduce pollution, regulators only allow exporters to load ships using enclosed conveyor belts – as opposed to the previous use of cranes and barges.

Iron ore and thermal coal are the key drivers in the coming months. Soybean exports out of Brazil will play a supporting role as demand is building up.