China’s aim of 7.5% GDP growth for 2014 is positive news for the shipping market – in particular, dry bulk

“The importance of China to the shipping market is second to none. This goes for all major shipping segments. In spite of leaving the double-digit growth rates behind us in the previous decade, the sheer size of the world’s second-largest economy now gives so much impetus to our industry that we have become addicted to China.”

Despite being a little down on the 2013 GDP growth of 7.7%, the growth target of 7.5% set by China’s Premier Li Keqiang at his first appearance at China’s annual parliamentary session bodes well for shipping, trade, and commodity demand in 2014.

Imports of dry bulk commodities dominate the trade by accounting for 74% in 2013. Led by iron ore, which accounts for 39%, the scope of imports become larger and wider every day.

Chief Shipping Analyst at BIMCO, Peter Sand, says: “The importance of China to the shipping market is second to none. This goes for all major shipping segments. In spite of leaving the double-digit growth rates behind us in the previous decade, the sheer size of the world’s second-largest economy now gives so much impetus to our industry that we have become addicted to China.”

A bumpy road
A stable and improved Chinese economy, even at a slower GDP growth level, is thus vital to a sound shipping market going forward. Yesterday’s announcement on upgra¬ding exports and promoting a balanced growth of foreign trade is very positive news.

The announcement of the target, delivered during the 12th National People’s Congress on 5 March, comes after a couple of month where the Chinese economy has shown some weakness in Purchasing Managers Index (PMI) developments.
Recent development in Chinese PMI showed an 8-month low in the official PMI, coming in at 50.2 in February. The HSBC China Manufacturing PMI posted at 48.5 in the same month supplements this slowing tendency. Both indexes agree on tougher conditions for smaller and medium-sized enterprises, whereas larger enterprises seem to fend off the headwind rather better. 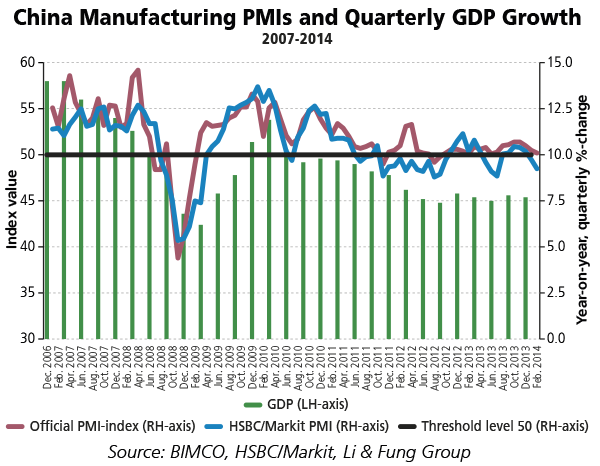 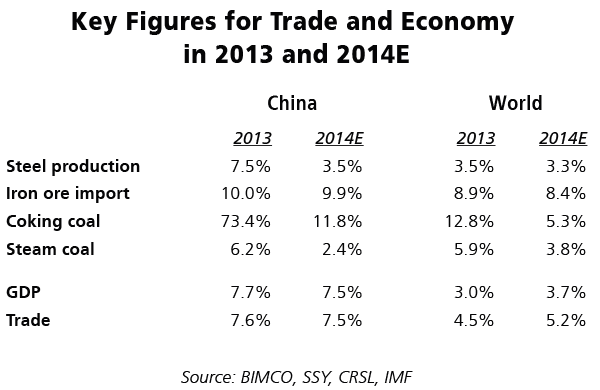 Going forward, expectations are very positive for both China and the world as such.

Selected key statements from the China Premier
Here are a couple of statements, all relevant to the shipping industry and the macroeconomic foundation, taken from the Premiers speech (source: Bloomberg):

“This target is in keeping with our goal of finishing budding a moderately prosperous society in all respects, and it will boost market confidence and promote economic structural adjustment. More importantly, stable growth ensures employment.”

On recalibrating the economic growth model:
“Boosting domestic demand is both a major force driving economic growth and an important structural adjustment. We need to fully leverage the basic role of consumption and the key role of investment, foster new regional economic mainstay belts, stimulate both supply and demand, and establish a permanent mechanism for increasing domestic demand.”

“We will pursue a balanced monetary policy, move toward a basic balance between overall supply and demand in society, and foster a stable monetary and financial environment. We will strengthen macro-prudential management to encourage an appropriate increase of monetary credit and nongovernmental financing.”

“We will strengthen the coordination of fiscal and monetary policies with industrial and investment policies, maintain policy options, make adjustments at an appropriate time and to an appropriate degree, and ensure smooth sailing of the giant ship of China's economy.”

“We will regulate housing differently in different cities in light of local conditions. Increase the supply of small and medium-sized commercial and joint-ownership housing units, curb demand for housing for speculation and investment purposes, and promote sustained and healthy development of the real estate market.”

On foreign trade:
“We will make it a strategic priority to upgrade exports and promote balanced growth of foreign trade. Total imports and exports are projected to grow at around 7.5% this year. We will keep export policies stable and improve them, accelerate reform to facilitate customs clearance, and extend trials of cross-border e-commerce. We will implement policies to encourage imports and import more products in short supply in China.”

“In the first half of last year, China's exports fluctuated drastically, the economic growth rate continued to decline, central government revenue registered negative growth for the first time in many years, and the inter-bank offered rate for lending rose sharply. There was overseas speculation that China's economy would have a "hard landing."

“In response to all this, we adhered to a proactive fiscal policy and a prudent monetary policy. We did not adopt short-term stimulus measures, increase the deficit or issue excessive currency. Instead, we increased effective supply, unleashed potential demand, confidently dealt with short-term market fluctuations, and kept economic activities from sliding out of the proper range. All these efforts reassured the market and played a vital role in sustaining steady economic growth.”

On energy, commodities and China as a maritime power:
“The seas are our valuable national territory. We will steadfastly promote land and marine development in a coordinated way, fully implement China's marine strategy, develop the marine economy, protect the marine environment, resolutely uphold China's maritime rights and interests, and build China into a maritime power.”
“We will change the way energy is produced and consumed.”

“We will strengthen exploration, exploitation and utilization of natural gas, coal seam gas and shale gas.”

“We will strengthen energy conservation and emissions reduction and impose a ceiling on total energy consumption.”

“A strong shipping market support from China is vital to pave the way back to a future sustainable market. Past contributions have been enormous. If the future holds more of the same, we will continue to see improvements in the fundamental balance between supply and demand”, adds Peter Sand.