Macro Economics - Fundamental changes ongoing, and a positive outlook materialising around the world

2014 is off to a good start, as global economic growth is already stronger than anticipated three months ago. At the end of January, the IMF upwardly adjusted its estimates for global economic development in 2013-2015. Amongst the countries receiving noticeable positive adjustments were the US, Japan, Spain, UK, China and India.

2014 is off to a good start, as global economic growth is already stronger than anticipated three months ago. At the end of January, the IMF upwardly adjusted its estimates for global economic development in 2013-2015. Amongst the countries receiving noticeable positive adjustments were the US, Japan, Spain, UK, China and India. At the negative end of the scale, Russia, Italy, ASEAN-5 and Brazil are expected to perform less strongly than previously anticipated.

In 2000, 80% of global economic activity took place in the “Advance Economies” (US, Euro Area, Japan, UK, Canada, others), in 2008 the share was down to 70% and today “only” 60% of global GDP is generated there, with 40% generated in the “Emerging market and developing economies”.

Growth in the ”Advanced economies” generates higher volumes of imported goods per unit of GDP – and thus more trade – than growth in the “Emerging market and developing economies”. This is an explanatory factor behind the “new normal”, where the trade/GDP multiplier is lower (for more on this see SMO&O 2013-6). This dampening of the impact from economic growth on demand for transport is negative. However, the fact remains that fundamental global economic growth is positive, and is generating a larger demand for shipping every day, but at a slower pace than before. 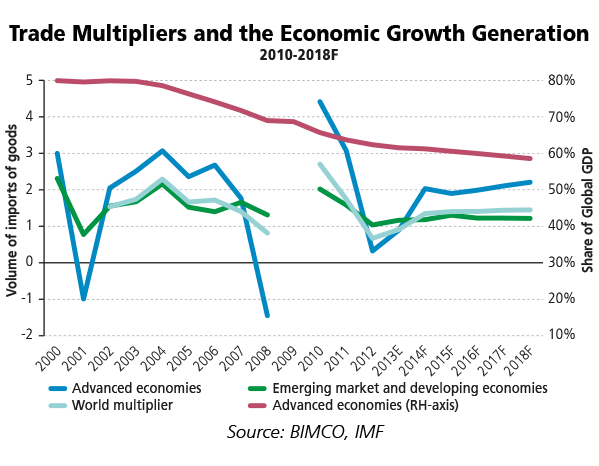 In December 2013, the World Trade Organization (WTO) succeeded in closing a truly global trade deal involving 159 countries. The agreement is estimated to inject USD 960 billion into the global economy and create 21 million jobs, 18 million of them in developing nations (Peterson Institute of International Economics). The deal slashes red tape at customs around the world and gives improved terms of trade to the poorest countries.

On 18 December 2013, the US Central Bank (FED) announced the anticipated beginning of reducing the rate of its asset purchases. From USD 85 billion to USD 75 billion per month. This is a positive development, as it comes on the back of an improved economic situation in the US. However, it comes with a warning attached from the FED: “that it [the economy] also has much further to travel before [economic] conditions can be judged normal”. Amongst the key conditions to follow are interest rates, unemployment rates and inflation rates. On 29 January 2014 the FED announced round two of the tapering measures, trimming its monthly bond purchases by another USD 10 billion to USD 65 billion. Round two was decided on the back of strong private consumption and reports of the US economy growing by 3.2% in Q4.

Further tapering is likely to follow if economic health continues to improve; steps that will be backtracked if the economy disappoints.

The budget agreement was reached in due time to sideline the risk of another government shut-down – at least in the short run. That immediately affected US consumer confidence positively. The index stood at 80.7 at the end of January, just on top of pre-government shutdown level (80.2 in Sept.). As compared to a year ago (index at 58.4), consumers are now in better spirits, and looking more optimistically on the job market. This is why domestic private demand is one of the key drivers behind increased economic activity in the coming years.

World crude steel production increased 3.5% in 2013, driven forward by Asian production, where China more or less singlehandedly occupies the limelight due to its sheer size. Japanese growth of 3.1% and Indian growth of 5.1% is dwarfed by China, that brings its total production within striking distance of half the world’s production. No wonder the increasing dependency on imported ore influenced the dry bulk market in H2-2013.

As Japan seems to continue growing at 1.7% in 2014, the obstacles to “Abenomics” have also become clearer, as a full-blown miracle turn-around might not happen just yet. Several factors come into play in Japan in 2014, all of which hold the potential to affect the recovery: a consumption tax hike, the energy situation post-Fukushima that has given Japan a massive trade deficit, new reforms to change the labour market, stability in politics, as well as the Bank of Japan’s monetary policy.

China continues to manage its soft landing on a background of high growth. GDP growth still slides from a high base, while the Manufacturing PMI from HSBC/Markit has slid back into sub-50 level for the first time in half a year.

India is set to build on the recent momentum in export growth and the development of more structural policies to support investments. This will bring around GDP growth at 5.4% in 2014 and 6.4% in 2015 if the IMF scenario plays out. 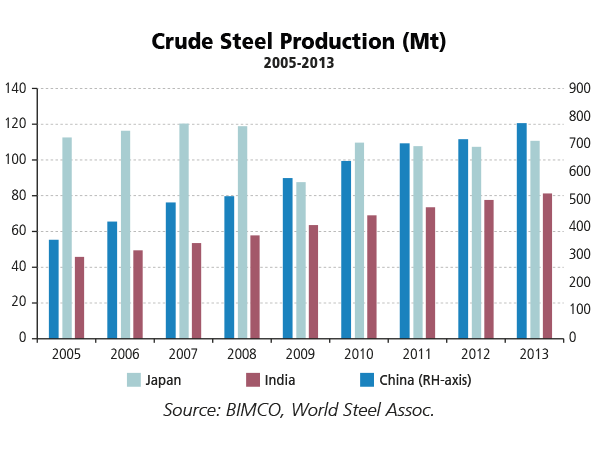 The 2008 crisis ignited a double-dip recession in Europe longer than that of the 1930s. As we embark on 2014, Europe starts to claw back some of the lost territory. It does so under the shadow of high public and private debt that limits consumption, while exports are the mainstay of economic growth.

Growing exports out of the EU and trade between the European nations came back as a significant growth driver in 2012, but more negatives, primarily private consumption, trumped it. Exports remains the primary contributor to the European road back to recovery.

Moreover, private consumption ceased to be a drag on growth in 2013-Q2 following five quarters of negative contribution. In 2013-Q3 the impact was neutral.

In Spain, which is one of the European nations most hurt by the financial crisis, the 2014 rebound is set to be a strong one. Italy is also returning from the abyss. The IMF expects both nations to grow by 0.6%.

Indicators point towards strong US growth in 2014, paced forward by a rise in US house prices. The recovery in house prices, illustrated by an increase in the S&P/Case-Shiller index of property prices of 13.7% from November 2012 to November 2013 (the highest level in nearly 8 years), has been instrumental behind the performance in 2013 that ended the year with the FED starting to unwind its considerable monetary expansionary support. The IMF expects US GDP growth of 2.8% in 2014 and 3.0% in 2015 [2013: 1.9%].

The other side of the coin to higher growth is that interest rates may be pushed up and politicians’ appetite for reforms pushed down.

Higher property prices normally have quite a strong “wealth effect” on consumption growth, even though findings suggest is has slowed in the wake of the financial crisis. If forecasts of higher house prices in 2014 come true, this will strengthen GDP growth in the US and shipping demand in general.

In the Eurozone the economic recovery is strengthening too. Germany delivering the strongest output since June 2011, with employment rising during the past three month. This is supported by an optimistic first non-contraction level indication from the “Rest of the Eurozone” (excl. France and Germany). On the more negative side, France struggles to take off, as output has fallen three month in a row now.

“The upturn in the PMI puts the region [EU] on course for a 0.4-0.5% expansion of GDP in the first quarter, as a 0.6-0.7% expansion in Germany helps offset a flat-looking picture in France”, Markit concludes.

Contact online
BACK TO: Dry Bulk Shipping - Reality bites as 2014 dawns, but the demand base is stronger than ever NEXT: Tanker Shipping - Slow steaming and low fleet growth creates a positive situation for many owners