On a global scale, containerised export data from CTS, shows that activity improved in May following a weak start to 2013. Since then, the pace has picked up, and November and December saw 5-7% growth rates from same months of last year.

On a global scale, containerised export data from CTS, shows that activity improved in May following a weak start to 2013. Since then, the pace has picked up, and November and December saw 5-7% growth rates from same months of last year. As total imports into Europe have been growing even more strongly, it does explain why traceable freight rates from Shanghai to Europe went up sharply in October and December. In the meantime, freight rates on US bound boxes have been very steady, with only slight volatility until the recent upswing in January.
As in the past years, demand has grown quickest on the intra-Asia trades. This trend continues, despite the lowering of the IMF’s GDP-growth expectations for Emerging and developing economies. January has been slow in terms of cargo and chartering activity, but set to return by mid-February.
The US economy is the key driver for global growth in container shipping. In the Macro Economic section, it was mentioned that the US economy was going through a positive development. To look at bit deeper into that, traffic development in US ports is very interesting. The inbound loaded traffic on the US Atlantic coast remained almost unchanged this December compared to last year. Unfortunately, ports in the US Gulf were not so lucky. Compared to December last year, the US Gulf Coast ports saw a drop in inbound loaded traffic of more than 5%.
Overall, 2013 turned out to be a good year for the eastern ports of America. The increase in traffic to the Atlantic Coast ended a bit higher than 1% up on 2012, whereas the traffic to the Gulf Coast grew by almost 6%, an overall increase of 1.7% for eastern ports. 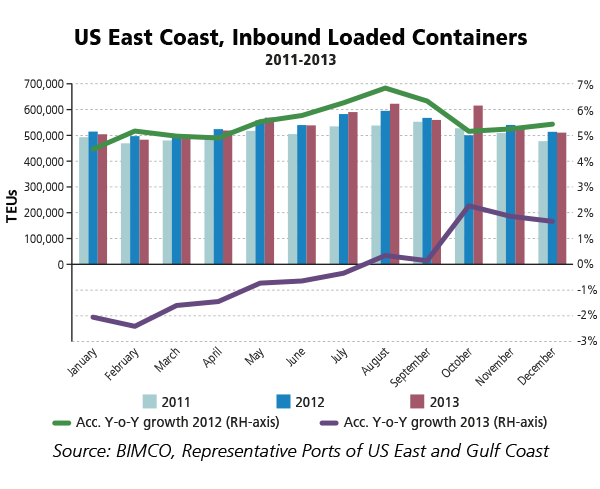 In spite of US exports being a significant contributor to US GDP growth in the 4th quarter of 2013, loaded container traffic out of the US East Coast ports did not fare well in 2013. The year ended more than 3% lower than last year. Looking forward, higher economic growth in the US in 2014 should lead to more cargo going through the Atlantic and Gulf Coast container terminals, building further on the rising trend seen throughout 2013. To benefit from this, most terminals have invested quite strongly in the future by scaling up container handling activities to meet the requirements of larger ships calling.
Whereas European imports fell in December 2013 as compared to 2012, imports of loaded containers on the US West Coast were on a par. For the year as a whole, the USWC saw growth of 2%, beating annual growth in 2012 by 0.1%-points. 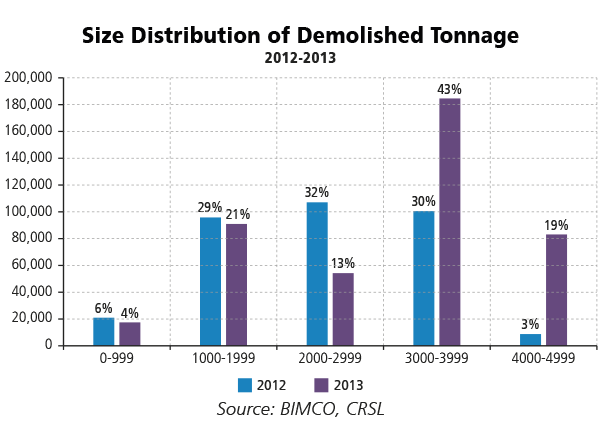 Panamax vessels are particularly feeling the heat in the demolition market, as they are commercially seen as special purpose ships – maybe without a special purpose once the Panama Canal expansion opens up and the beam limit in the Panama Canal extends from 32 to 49 metres in 2015. The fact remains that all “Panamax” container ships have an uncertain future. However, as long as the old locks and the new locks are working in parallel and the future pricing of transits, as decided by the Panama Canal Authority (ACP), is still unknown, there may be more room for “Panamax” business in future than meets the eye today.

This race for the bigger ship sizes is also apparent in secondhand values, where the prices for tonnage seems to deviate with size. Larger tonnage appears to be holding up or even increasing in value, whereas the smaller ships are experiencing sliding prices as reality bites.

By mid-January, the idle fleet stood at 693,000 TEU according to Alphaliner, up 9% from mid-November (635,000 TEU). This is below the average from recent years and will probably stay below par throughout the Chinese New Year in the first two weeks of February. Operators appear to have the upper hand in the markets right now, judging by recent success in achieving higher freight rates through negotiation.

BIMCO expects 2014 to be a year of similar fleet growth to last year (around 6%), which is also expected for 2015. The industry’s ability to land the supply growth at a “new normal” level – one that matches demand growth better – seems strong. 1.6 million TEU is scheduled for delivery, but BIMCO estimate the cancellations, delays, postponements etc. still affect the “planned” arrival for the new ships. 2014 is setting out to be a year where the pace of ULCS deliveries picks up. 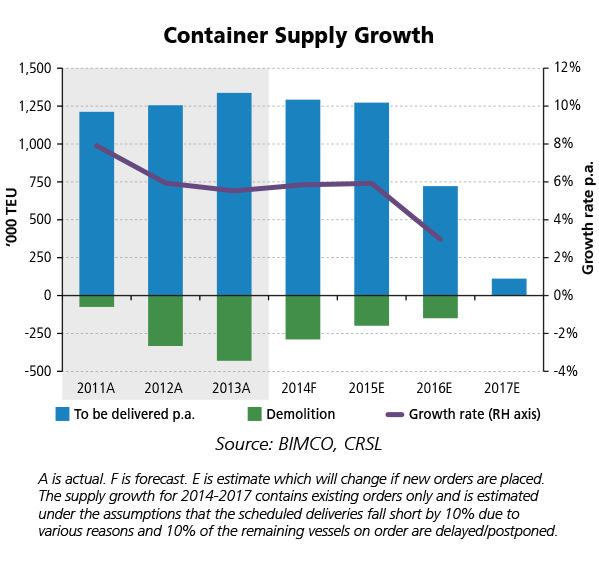 Fleet growth in December was negative, as tonnage may have been delayed a bit back in December, pushing delivery and thus also the year of building into 2014. December saw only four ships delivered, whereas a “flood” of 16 ships of an average capacity of 7,771 TEU has entered the active fleet in the first three weeks of January.
Despite a year that saw new contracts for more the 1.8 million TEU, the orderbook for containerships looks to be amongst the healthiest in the industry. Two full years are in place, but 2016 and 2017 look very slim and ready to absorb any renewed ordering spree.

In order to assess the overall health of the container shipping industry, it is vital to keep one’s eyes open towards developments in the bunker fuel market. As we have seen in the past many times, striking e.g. a contract of affreightment with a firm revenue stream without making sure you have hedged/fixed your bunker fuel costs at the same time can be extremely costly as well as an unnecessary risk to expose yourself to.

Bunker prices have been down on annual average 7% from 2012 to 2013. This is something that has surely benefitted profit/loss statements across the industry. On the other hand, the CCFI Composite (that includes not only spot freight rates but also long-term contractual rates) out of China dropped by 7% overall. Specifically to Europe, the composite index dropped by -11% and on the US West Coast, a marginal improvement was recorded.

Going forward, the demand side is set for growth, with improving macroeconomics in primarily the US but also in Europe. That, in combination with ongoing management of the supply side, should bring about improved freight rates on a global scale. A lot of cascading is expected too, as the “overhaul” continues on the main trading lanes, which will be supplemented by a similar trend on the secondary trades.

Once the Chinese New Year celebrations are over in mid-February, a steadier period is foreseen in terms of activity. Reactivations will then start again, as demand picks up.

On asset prices we continue to see a downward pressure on smaller units, whereas the run towards improved economies of scale can result in higher values for larger units.

Contact online
BACK TO: The shipping market in 2013 and looking forward NEXT: Dry Bulk Shipping - Reality bites as 2014 dawns, but the demand base is stronger than ever