The fleet is being heavily skewed towards the bigger sizes, as investors seek to lower unit costs, reap the benefits of economies of scale and by that, improve competitiveness. The future is set for slow steaming and larger volumes on each ship, but profitability for the operators will depend on utilisation.

Demand:
Traffic on the US West Coast took a hit, partly due to seasonality this October, with none of the ports reaching the inbound loaded trade numbers seen last month. The government shutdown in October and the related political uncertainties left US consumer confidence groggy, which affected private demand significantly in the short term. The same pattern appears when comparisons are made with the same month last year. All ports, except Long Beach, reported less traffic in October 2013 than October 2012. On a broader perspective, the accumulated year-on-year growth rate was also reduced, but remains at a positive 1.6%. 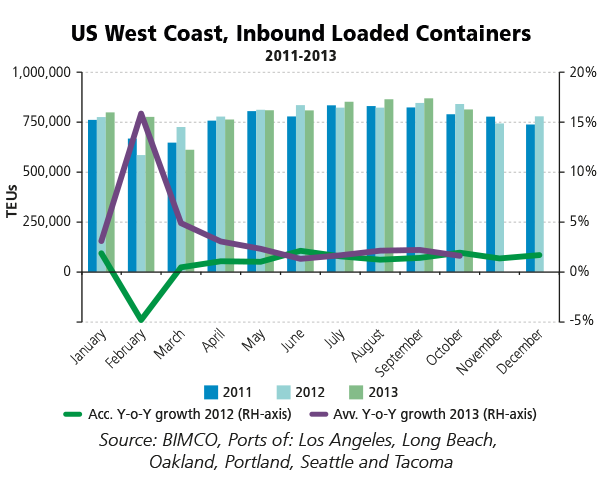 In outbound containerised exports, we see an identical slow trend. Whereas the amount of traffic was higher than September, it is still almost 1% lower when compared to October 2012. The accumulated year-on-year growth rate which, for the first time since February last month climbed above the no-growth line, now stands just below that.

In the meantime in Europe, volumes have come down again following the early “peak season”. Deployed capacity on this key trade lane has been adjusted to the low season and several services have seen fewer vessels trading. The adjustments to supply, combined with still strong enough volumes on the front haul, resulted in a hike in freight rates in early November. Four weeks later, half of that hike has been wiped out, as demand contracted too fast to fill up the ships. 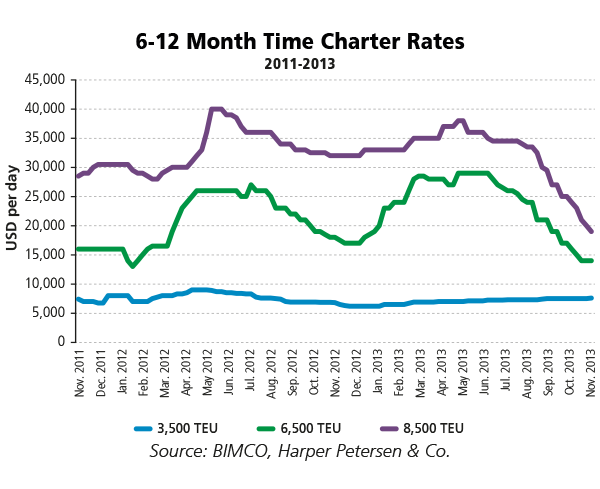 Whereas demand for transporting boxes is on the rise, the charter market (6-12 months) for the larger vessels sizes, 6,500 TEU and 8,500 TEU has tumbled lately, while charter rates for smaller ship sizes have remained flat, or with a small tick upwards. Increased seasonality in the charter market since 2009 has put downward pressure on the charter market when we leave the “peak season” to enter into the weaker Winter months. What makes this season a bit special is that the dip this time around has resulted in the lowest rates since 2010 for 8,500 TEU ships when the market rebounded from the post-crisis abyss. BIMCO believes that some of the increased pressure in the charter market originates from larger tonnage cascading into “secondary trades”. An example of this is the increased use of 7,000-9,000 TEU on the Far East to US East Coast trade via the Suez Canal. The overhaul of the Far East to Europe trade, where the future only holds a place for Ultra Large Containerships (+10,000 TEU), has seen the usual workhorses on that trade cascade into other trades.

Supply:
The pace of newbuilding orders placed for box ships in 2013 has been strong too, with 1.69 million TEU contracted (2012: 0.4 million TEU). The orders are following the same pattern as seen in recent years. 52% of the new capacity contracted during 2013 is for Ultra Large Containerships (ULCS), with 35% placed in the 8,000-9,999 TEU range. This leaves 13% for sub-8,000 TEU contracts. The fleet is being heavily skewed towards the bigger sizes, as investors seek to lower unit costs, reap the benefits of economies of scale and by that, improve competitiveness. The future is set for slow steaming and larger volumes on each ship, but profitability for the operators will depend on utilisation. With a charter market in the respirator, it is important to notice that all of new orders for ULCSs come with a charter party attached. 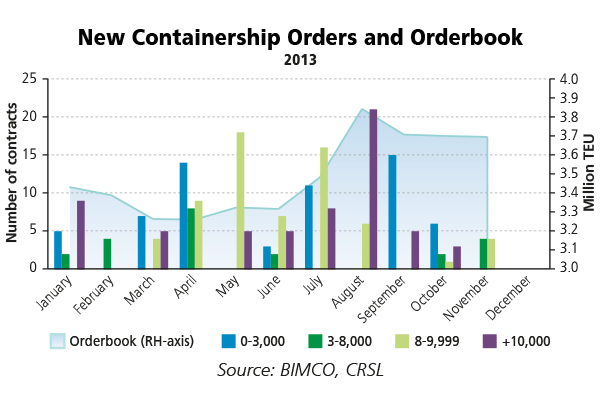 The orderbook data in total mirrors the aforementioned trend, with 81% of the capacity of the orderbook being in the Post-Panamax +8,000 TEU size.

The inflow of new tonnage in 2013 remains on target to become the second largest on record, but most importantly, demolition activity is already at all-time high level, with more to come. Fleet expansion around 5.9% is set to become the new standard level of supply growth. This matches the BIMCO forecast of a “new normal”, not just in terms of global economic development but also in container shipping as regard supply and demand. From 1996 to 2011, the annual nominal fleet growth was 11%. 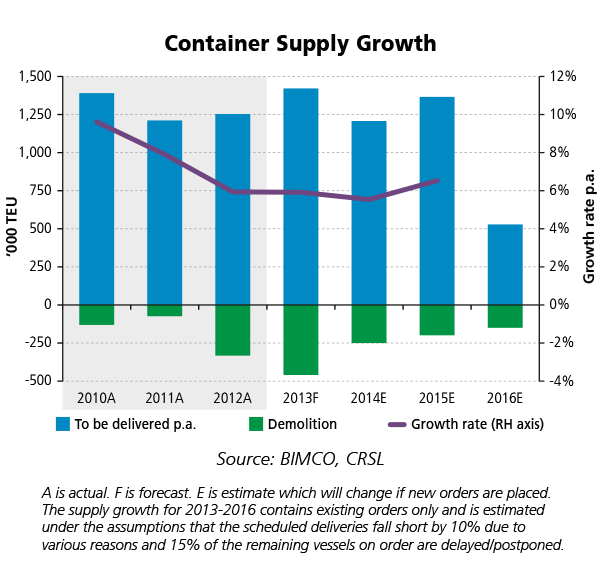 Despite the fact that demolition activity in second half of the year has lost some steam, we are already at 370,000 TEU, just shy of the full year record of 378,000 TEU seen in 2009 in the wake of the crisis. For 2013 as a whole, demolition of tonnage will have eased the sting of introducing newbuilt capacity of more than 1.4 million TEU.

A couple of characteristics of the demolished fleet tell us that this year’s vessels are both younger and larger than ever. The average ship sent to the breakers during 2013 was built in 1990 and has a capacity of 2,286 TEU. Last year, those numbers were 1988 and 1,868 TEU respectively. The recent two years have lowered the average age considerably and may hint at an expected shorter life for the present fleet than has historically been the case. The average breaking age from 2005-2011 was 29 years. It remains to be seen whether demolition activity in 2014 will follow in the footsteps of this year and surprise on the upside to limit fleet growth.

Outlook:
The positive trends in global macroeconomics, especially in the US and Europe, put consumer confidence on a rising trend too, all of which is good for the container shipping industry. BIMCO believes that the “new normal” is one that holds demand growth going forward at a lower level than seen in the past decade of globalisation. The “next normal” level of globalisation is seen to hold global demand growth going forward at 5-7% coming down from the first round of double-digit growth. The global market demand grew by 5% in Q3-2013 on a y-o-y basis.

BIMCO expects the idle fleet to continue the past months’ climb. By mid-November, the idle fleet stood at 635,000 TEU, out of which 76% are ships owned by non-operating owners. 70% of the idle ships are charter free, according to Alphaliner. During the latest two low seasons around year-end and Chinese New Year (January/February), the idle fleet reached levels just above 850,000 TEU – representing 5.9% in 2012 and 5.3% in 2013 of the fleet at that time. In order to see the idle fleet meet the same level in February 2014, 977,000 TEU must be laid up (5.6% of the fleet). Whether this will happen remains to be seen.

In 2013, the inflow of ULCSs have taken a bit of a breather. Only 33 have been launched so far, with nine more scheduled for delivery. This compares to 51 delivered in 2012 and 45 the year before that. For 2014-delivery, as many as 52 are scheduled for delivery. However, BIMCO expects actual deliveries to be up to 20% lower than the scheduled number, as owners and yards seek to find common ground for delivering the vessel at the right time and quality. In late November 2012, 47 were scheduled for 2013 delivery – which leaves us at a possible shortfall of around 20% in the current year.