With a sigh of relief, shipping people all over the world received the positive numbers indicating the beginning of the recovery of the European economy.

Global economy:
With a sigh of relief, shipping people all over the world received the positive numbers indicating the beginning of the recovery of the European economy.

Before we lift both arms skywards in celebration, we must bear in mind that the global economy is still performing under the impact of “banned substances” such as expansionary fiscal, as well as monetary, policies from the East to the West.  Most recently, the US decided to stay on the medication to bridge the gap from the present state of the economy to a self-supporting one.

The past five years of economic hardship across all nations and all industries has affected shipping extensively and continues to do so. We may be beyond the abyss, but the fight for a positive cash flow, a healthy balance sheet, profits, and more “A-rated” counterparts goes on.

US:
The US economic recovery remains tepid, but it is still improving, supported by a rebounding housing market and maintained Quantitative Easing by the US central bank (FED). Higher house and stock prices provide confidence for households to continue private consumption. These positive elements help the recovery to move in the right direction and offset the negative drag on growth stemming from the imposed spending cuts (sequester). Sequestration is a rather indiscriminate method of fiscal consolidation; nevertheless, it brings about a much-needed lowering of annual public deficits. 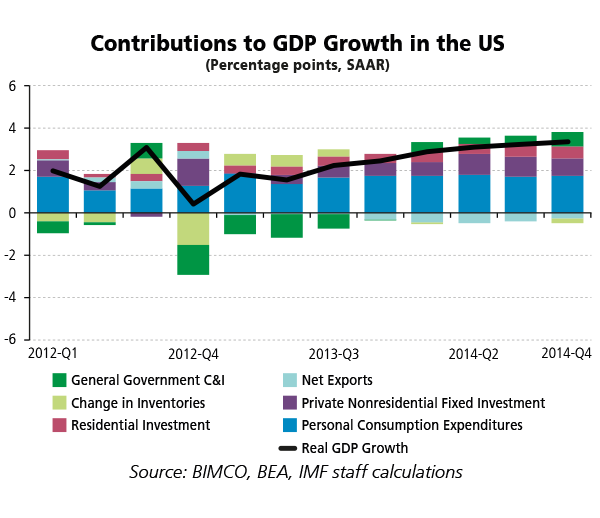 Despite the sound need for lower annual spending, the current fiscal policy brings with it a drag on growth in 2013 (the green part of the stacked columns), but still holds the potential for contributing to growth in 2014.

However, what could offset most of the positive impact on growth that increased general government spending will bring in 2014, is a negative trade balance.

The third and final estimate of US GDP for Q2-2013 was unchanged at 2.5%, positively affected by high exports and low imports levels.

According to the FED, the recent rapid tightening of financial conditions in the US and a still-unsatisfactory situation on the job market convinced the FED to refrain from entering into the anticipated tightening of the on-going, very loose, monetary policy.

At the time of writing, the dispute about the US debt ceiling is still unsettled. If politicians do not reach an agreement before 17 October, the US will default on its loans. The general fiscal battle led to a partial government shutdown last week.

Asia:
In Japan, aggressive monetary policy support and the on-going reform process are the ones to watch for, as the leaders of the nation attempt to turn around decades of poor economic performance into higher inflation expectations and economic progression.

The discussions on Asia centred on a slowdown in the Chinese GDP growth seem to have ended on a positive note by the PMI figures from Markit Economics re-entering the over-50 threshold level indicating expansion. With this position, it joined the official government PMI that has just avoided dipping into negative territory, most recently in June. Chinese Premier Li effectively ended the negative sentiment by making it clear that he is aiming for 7.5% of GDP growth in 2013, with some policy easing and more investment in infrastructure. This has ignited the dry bulk Capesize market in recent months.

HSBC China manufacturing PMI for September was in expansionary territory for the second month in a row, and on a 6-month high. It is likewise encouraging to find out that new export orders are also up and expanding from previous month.

India’s growth is slowing down and it is now expected at 5.5% from an initial forecast of 7%. This is influencing India in addition to the currency situation. A lot of focus has been on the unexpected rate hike in the fight against inflation (and the currency depreciation) as well as the recent September appreciation of the Rupee against the US Dollar, reversing the 4 month trend of depreciation. The slow decline that started back in May ended in a free-fall towards the end of August, leaving the Indian ship recycling industry in a state of emergency, paralysing business. However, the impressive September appreciation has raised spirits in Alang and saw a number of rather speculative positions being taken by cash buyers as a result, according to GMS. 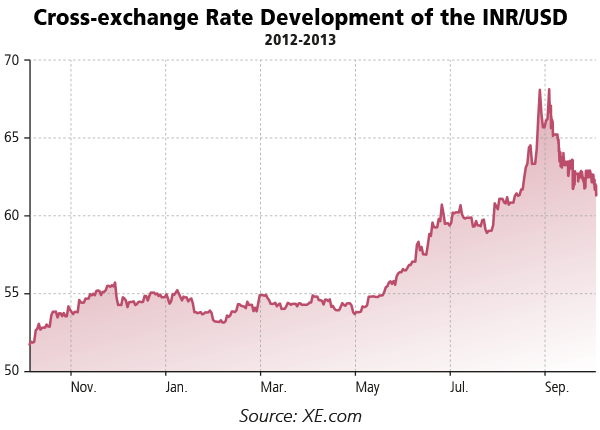 EU:
In our previous report we pointed out that we are finally seeing overall positive economic development in Europe. Now the upswing is substantiated by hard figures on GDP growth for Q2-2013 coming in at 0.3% higher than the previous quarter. Most remarkable was the solid positive numbers from Germany (0.7%) and France (0.5%), but also the much improving but still negative growth figures from Spain (-0.1%) and Italy (-0.2%).

As a caveat, we must mention that construction and stock rebuilding were significant one-off gains in Q2 that is likely to leave Q3 at a lower, but still positive, growth level.

Markit Eurozone composite PMI has now been improving for 6 months, of which the most recent three months have been in the expansionary area. This has been the best quarter for over two years. Employment numbers, however, continue to fall in some nations, but at a still slowing pace, meaning that Europe as such might be in the right lane for some job creation just a bit further down the road. By 1 October, the Euro Area posted the first improvement in the unemployment rate since March 2011.

Outlook:
Job creation remains at the top of the agenda across the globe. The sheer lack of it is what has caused the Eurozone to post a falling level of employment since 2008 and the not-as-fast-as-hoped-for pace. Job creation in the US is what keeps the FED from tapering its quantitative easing. In China, the slowdown of the economy and subsequent difficulties in maintaining previous levels of job creation, also add worry.

In a world of ever increasing economic interconnections the on-going debates in the US Congress also affect how business managers look at exporting opportunities in e.g. Japan. Politicians affect the business environment positively when creating the right framework to grow your business within, but affect it also negatively when they refrain from doing so by being unable to overcome differences of opinion.

As 2013 is soon to be history, the European recession is set to go down that road too. Don’t expect a lightning recovery though, but a steady and slow one, as the debt crisis is still present in some nations and extensive reforms still need to come into force and take action to provide a sustainable economic growth trail going forward.