The balancing act continues, as demand moves forward at snail’s pace while a new record-sized containership is deployed in the Asia-Europe trading lane

Demand:
The container shipping segment is in a class of its own. Demand is hobbling forward at best while new and larger sized tonnage is introduced constantly and at the same time, idle tonnage is reactivated. What do you get? That one is straight forward: poor utilization numbers. But what do you also get in the market place these days? That is less straight forward, as you get freight rates on main lane trades that provides a profit for the operators. How can that be? Shouldn’t the markets suffer from constant downward pressure originating from a heavily skewed fundamental imbalance? Well yes – but there is much more to it than that.

Having said that, several container lines keep on posting poor financial results as the world of container shipping is so much more than the main trade lanes. Demand is still fairly good in the intra-Asian trades despite the lower growth level of Chinese exports and a recent beggar-thy-neighbour currency policy in Japan. On the trans-Pacific trades, volumes grew at slightly more than 2% in both directions for the first five months of 2013, according to CTS. Also, the volume growth on the backhaul leg from Europe to Asia was in positive waters. Altering a sour start to the year, the trade has now delivered a cumulative growth rate of 2.7% for the first four months. That leaves the blame on the Asia-Europe front haul leg, which delivered a three-year low level of hauled containers for the first four months of 2013, down 1% on 2012. 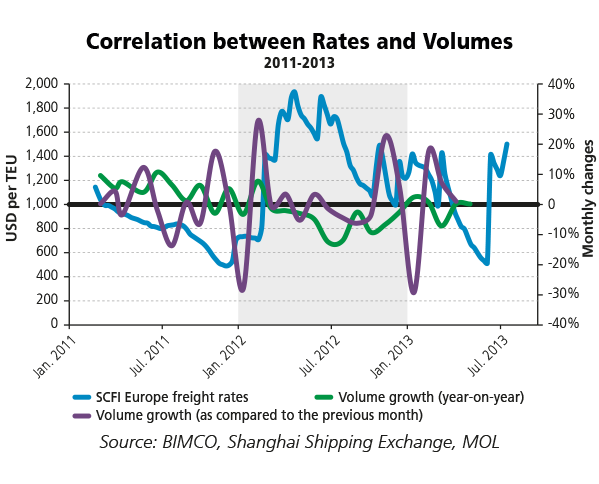 Contrary to the norm, the freight rates on the Asia-Europe trade lane aren’t driven by making supply match demand all the time. Actually, that correlation is quite far off if you compare SCFI Europe freight rates to the “long-term” monthly year-on-year volume growth (green line). A better correlation is achieved by using the “short-term” volume growth rate that compares two successive months. Having said that, deployed capacity is constantly changed in search of a balance – but as demand growth is so weak, it’s easy to get it “wrong”, with dramatic consequences to follow.

As an up-front example of this, by the end of June, freight rates returned to safely profitable territory following the largest weekly gain on record, going from USD 514 per TEU to USD 1,409 per TEU.

Supply:
Reversing the trend of several months with a falling level of idled containerships, mid-July numbers from Alphaliner now indicate that 187 units for 448,000 TEU is currently idle. This represents 2.7% of the total fleet. The dip in June was a 20-months low for the idle fleet. It remains sub-5,000 TEU, tonnage which primarily is held idle. 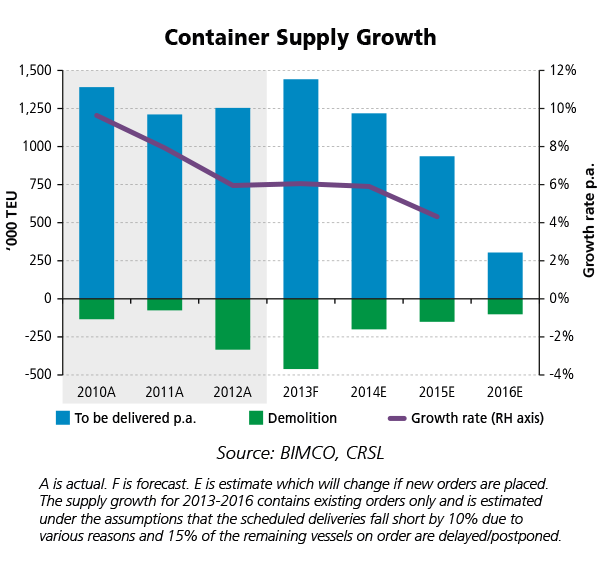 The growth in the containership segments remains positively impacted by a healthy level of demolition to counterbalance the inflow of newbuild tonnage. During the past two months, the fleet has grown by just 5 ships. Year-to-date the fleet has increased by 3.8%, as 134 new ships have been launched while 115 ships have left the fleet for good.

As the crisis bites into the economic value of the assets, the containerships that are being sold for recycling tend to grow bigger in size. Back in 2011, the average size of 59 ships being demolished stood at 1,308 TEU; in 2012 the average size grew to 1,865 for the 179 ships bound to be broken up. 2013 continues down that road, with year-to-date demolition of 41 post-3,000 TEU ships mostly built in the early 1990’es and 115 ships in total at an average size of 2,243 TEU. The first post-5,000 TEU vessel on record was built in 1995. Only time will tell if that is to be “next in line”, and go down in history as the largest container vessel demolished at some point. 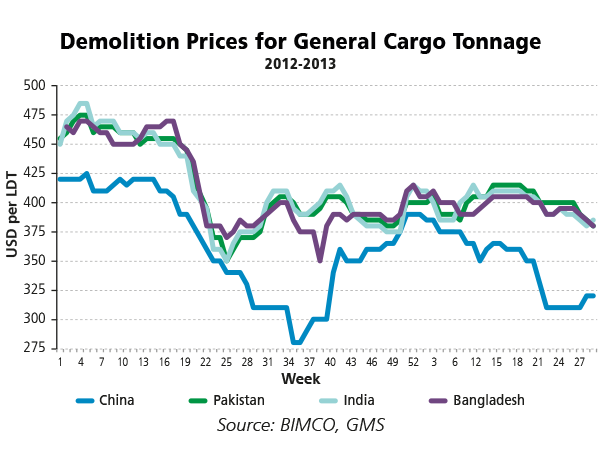 In spite of sliding demolition prices for general cargo ships (including container vessels), a total of 258,000 TEU has been broken up so far. BIMCO expects another 200,000 TEU to leave the fleet before year-end. This will level off some of the impact from the massive amount of new ships entering into the fleet. BIMCO projects deliveries in 2013 to exceed the 1.4 million TEU mark, which will put this year at the number two mark in the rankings, second only to 2008, where 1.5 million TEU were delivered.

Global deliveries are down significantly too, as deliveries in the first five months of 2013 were 23% smaller than the period last year.

In the meantime, new orders for containerships are surfacing constantly – with a substantial part coming from tonnage providers placing orders in the post-8,000 TEU size segments. As per orderbook information on 26 July 2013, containerships with a combined capacity of 917,263 TEU have been contracted in 2013 – but new rumours and press releases keep coming in to build on top of that. 85% of the 2013-orders have been for post-8,000 TEU sized tonnage.

The discussion about the need for more supersized tonnage may very well be a debate about perceiving it as a matter of “overcapacity or overhaul” of the service. The upgrade of a single trade to deploy only ULCS (+10,000 TEU) is the key in the following forward-looking projection:
In total, the fleet now holds 186 ULCS, up by 75 ships during the past 20 months. Average weekly deployed capacity on Asia-Europe trading lanes over the past 1½ years is approx. 370,000 TEU according to Alphaliner. If we assume a 10-week rotation on all services involved, that requires 3.7 million of ULCS tonnage if we are to target a trading lane service exclusively by ULCS’s. Today’s 186 ships represent 2.39 million TEU, leaving 1.31 million TEU or 94 ULSCs more to be delivered to make Asia-Europe a service of only ULCS vessels. That will happen in mid-June 2015. Driving unit costs down is the big motivation behind this, but the cascading effects on other trades are surely felt as well.

But before the existing orderbook of 112 ULCS’s of 1.57 million TEU can be put into active service, the monthly deployment must go up to 396,000 TEU – a level seen only once before, back in mid-2011, but likely to be needed in two years’ time. Overcapacity or overhaul, it’s in the eye and scope of the beholder to judge that, but for the isolated trade it appears to be an overhaul. Future prevalence of slow-steaming remains pivotal for a judgement regarding overcapacity.

A new world record was set in mid-July when Mærsk Mc-Kinney Møller, 18,270 TEU entered into active service in Busan, South Korea. She takes the number one spot from CMA CGM Marco Polo, 16,020 which entered into the Asia-Europe trading lane last year. Have we reached the maximum or optimal size? No, surely not, as the orderbook already holds orders for 18,400 TEU ships set for late 2014/early 2015 delivery to China Shipping (Group) Co.

Contact online
BACK TO: US coal exports beat Chinese coal imports as the most influential coal trade NEXT: Dry Bulk Shipping - positive window for Capesize owners