The influence of American coal exports on seaborne transportation has grown significantly over the past decade. In 2002, the US exported 20.1 million tons by sea, but in 2012 that number had increased to 106.7 million tons.

The influence of American coal exports on seaborne transportation has grown significantly over the past decade. In 2002, the US exported 20.1 million tons by sea, but in 2012 that number had increased to 106.7 million tons. The effect on shipping has multiplied due to the fact that much of the demand growth has come from East Asian countries. With a large part of the US Coal destined for East Asia being shipping out of the US East Coast ports, this will increase the demand for tonnage. 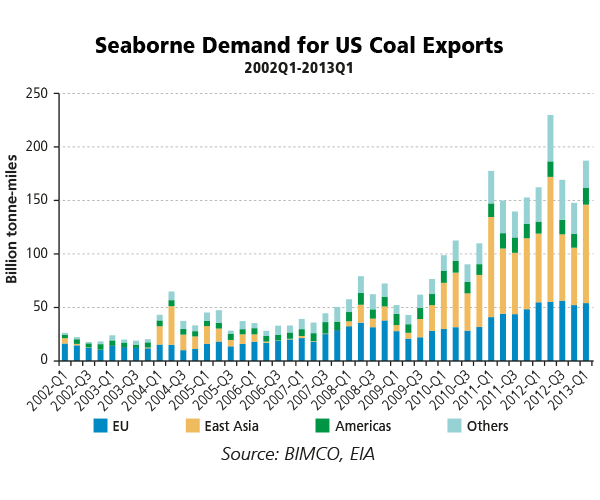 Likewise, the US exported 51.3 million tons of coal to the EU in 2012. The main destinations were The Netherlands and the UK with a total of 23.1 million tons. A part of the coal exports to The Netherlands are subsequently transhipped to German buyers. Traditionally, most of the European trade has been for coking coal, but 2012 marked the year where this pattern changed. In 2012, the US exported 27.9 million tons of thermal coal to the EU (54%), but only 23.4 million tons of coking coal (46%). Unlike the exports going to East Asia, all coal exports to Europe came from USEC/USGC ports making the transit distances substantially shorter. The result is that the exports to East Asia are more beneficial for the shipping industry than the exports to the European Union, despite involving much lower volumes.

Thermal coal exports – Reflecting a new energy market in the US
The increased thermal coal exports is explained by the large-scale exploitation of unconventional fuels in the US, which has made consumption of domestic oil and gas relatively cheaper. The average Brent-WTI spread went from nothing to around USD 17 per barrel during 2011 and 2012, while domestic US natural gas prices have halved since mid-2000s. 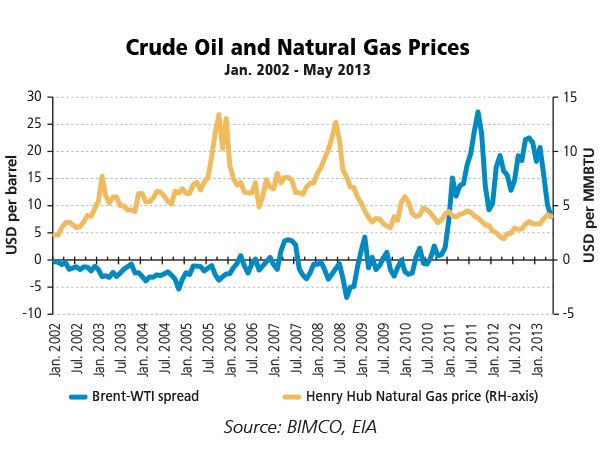 As a consequence, the domestic consumption of coal fell by 11% to 807.8 million tons in 2012. Since production only fell by 7.2% to 922.1 million tons, the potential for exports has increased.

Meanwhile, European gas-driven power plants suffer from oil-indexed contracts and higher oil prices, making coal the cheapest option for energy in Europe. Working in the same direction was the “collapsing” carbon prices within the EU ETS which only made the appetite for coal more significant. “Back loading” or not in the EU ETS, this is probably going to be the case also in the coming years. The  low freight rates during the past two years have also been an incentive for importing coal from countries far away such as the US and Colombia.

Thermal coal to East Asia is primarily shipped to South Korea, which has virtually no coal mining industry. The increased South Korean demand for US coal originates from a desire to diversify trading partners to manage rising coal costs. 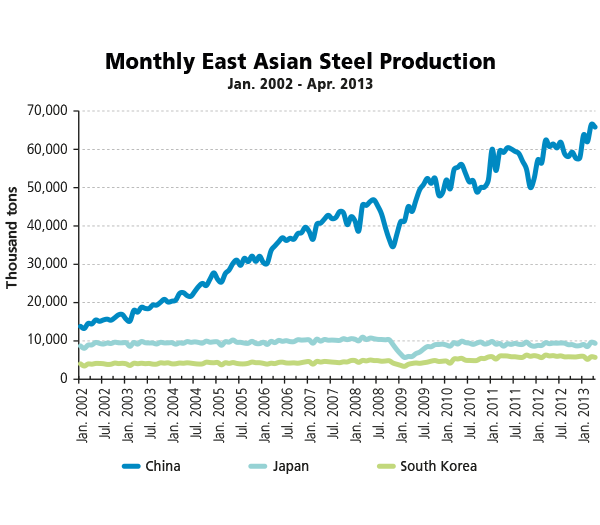 South Korea has traditionally imported coking coal from Australia, Canada and China. However, due to Chinese domestic demand, South Korean steel mills have to source their coal elsewhere than China, which has benefitted exporting countries such as the US and Russia.

Japan has imported less coking coal post-2008, but the country has increased its coking coal imports from the US as a substitute for Australian coking coal, which means that the distances travelled increase fourfold.

In the EU, seaborne coking coal demand has been relatively stable over the last decade, but a larger share is being sourced from the US. In 2002, the US exported 9.9 million tons to the European Union; in 2012, the number had increased to 23.4 million tons. The increased demand for coking coal came from Germany and The Netherlands in particular, but also from Italy, France and the UK.

Outlook
Looking forward, India could become a medium-term growth factor as the country has experienced very high demand growth for US coal during the past five years. The US exported 6.4 million tons to India in 2012 – all shipped from USEC/USGC ports.

Back in the US there are talks about building a large coal export terminal at Cherry Point, State of Washington or in the state of Oregon. One proposal, at Cherry Point near the Canadian border on the West Coast, plans to have a capacity of 48 million tons per year. The terminals would accommodate the large thermal coal reserves in Montana and Wyoming. Out of the 431.1 million tons of thermal coal produced in 2011 in these states, only 15.5 million tons were exported (source: EIA). The terminals are being built to meet the increasing demand for coal-fired power generation in East Asia, and at full capacity, the Cherry Point terminal would create employment for 40 Capesize vessels on an annualised basis. We expect to see a surge in exports if the terminals are built.

US thermal coal exports to East Asia in April were slightly up from the same month last year (8%), but down by 24% from the month before which represented an all-time-high in total coal exports. Coking coal is more of a joker, as the April numbers throw a wet blanket over the party. Coking coal exports to East Asia were substantially down from the same month last year (-40%) as well as from last month (-44%). Sources attribute this to lower GDP growth in China combined with a massive oversupply of coal in East Asia. Some analysts therefore expect US coal exports to be 10-15% lower this year compared to last year.

Another potential threat comes from the talk of a Chinese ban on high-sulphur and low-calorific coal, as much of the US coal going to China has a high content of sulphur. In 2012, China imported 8 million tons of coal with sulphur content above 1%. It is however uncertain if Beijing will ratify the coal ban. However the US has lots of low sulphur coal reserves to substitute the high sulphur coal if it is demanded.

“When we look into the future, global demand for thermal and coking coal is set for solid growth with thermal coal being in the driving seat both in terms of volume and percentage growth. If the US can stay price competitive in the market and scale up Pacific port capacity, the longer sailing distances are likely to benefit dry bulk shipping demand along the road” adds Peter Sand.

Contact online
BACK TO: Tanker Shipping - crude oil tankers in the mixed zone NEXT: Container Shipping - Little progress in demand and record-sized ships