Strong demolition activity dampens fleet growth, while stable US demand supports optimism as we head into the “peak-season”
Listen to podcast of article


Demand:
On the US West Coast, the year-to-date number of inbound loaded containers in 2013 has exceeded the volume in the same period in the past three years. The accumulated year-on-year growth rate in April was 3.0%, suggesting that the liner business may see reasonable demand growth on the Far East-US West Coast leg this year. 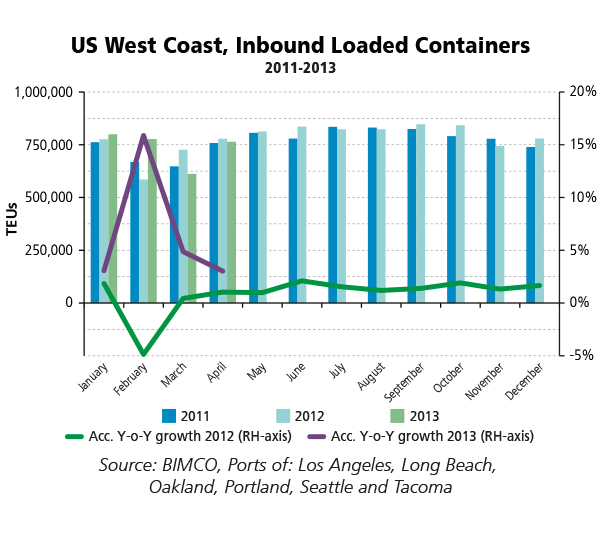 The volume of outbound loaded containers, which grew tremendously in 2011 with a rate of 6.7%, continues the sliding trend from 2012 with a slightly negative growth rate. The accumulated year-on-year growth rate was -0.6% for the first four months of 2013. An increase in the volume of outbound containers strengthens the financial position of the liner companies, as the vessels would be able to earn money on the backhaul leg as well.

Liner companies engaged in the Far East-Europe trade lane have found themselves in a state of misery lately as the European demand slump has led the SCFI spot-rate to drop to USD 641 per TEU down from USD 1,070 per TEU in early April. The trans-Pacific route experienced a minor fall but is still in a relatively good shape, as the SCFI rate to the US West Coast stands at USD 2,093 per FEU down from USD 2,302 per FEU in early April.

The route from Shanghai to the Persian Gulf is normally not the centre of attention, but after a considerable jump in the SCFI for this route in March, prices have now stabilised at around USD 900 per TEU – above the Far East-Europe lane despite the fact that distances are much shorter! The CCFI has been steadily increasing for the Far East-Persian Gulf route making the medium-term earnings potential for this route rather positive. 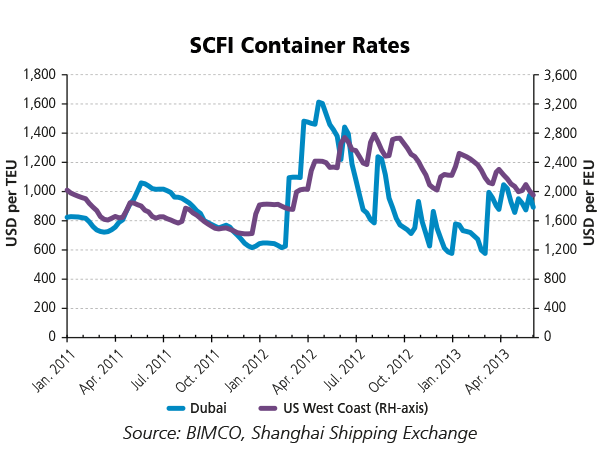 Supply:
The sustained interest in selling container ships for recycling has led BIMCO to an upward adjustment of the demolition forecast. The net effect on the expected fleet growth for 2013 is positive, regardless of the estimated all-time high level of deliveries that pulls in the opposite direction. In total, the fleet is now set for growth of 6.1%. Containership demolition remains focused on the smaller sizes (below 4,000 TEU) whereas deliveries are focused on the larger sizes (+8,000 TEU).

New containership orders follow the trend of “big is beautiful” and even bigger is even more beautiful. By the end of June the world will see a new giant on the top spot as the first Triple-E will be delivered, capable of carrying 18,000 TEU. But that top spot will be claimed next year by the Hyundai H.I. built 18,400 TEU ships that are scheduled for delivery in November 2014. In total, 5 ships of 18,400 TEU were ordered in early May.

Currently, the orderbook holds 115 +10,000 TEU ships for future delivery into an already active fleet of 180 ships equally huge. These vessels are bound to enter the Asia-Europe trade; so far in 2013 18 ULCS has been delivered with 31 left in scheduled orderbook – out of which BIMCO expect 23 to be delivered. 75% of the orderbook is for above 8,000 TEU containerships. At the other end of the scale, the orderbook does, however, also hold ships for delivery with sub-4,000 capacity, but it only represents 10% of the total orderbook.

In terms of new orders they are primarily for 2014-2015 delivery and thus affect the fleet growth in near future. 2014 is already getting full, with an expected fleet expansion already in excess of 5%. 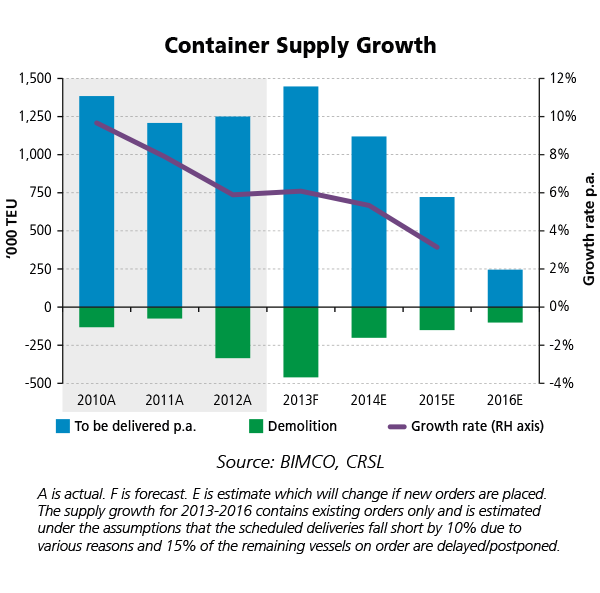 Outlook:
The overall demand situation for containerised goods, particularly in the EU, but also to some extent in the US, is keeping the industry under siege. The trouble in the European countries especially is keeping the lid on consumer confidence and spending.

In the US we still expect to see stronger import volumes going forward, as consumer confidence in the US rose to 76.2, representing the highest level since February 2008 (76.4). According to the Conference Board, consumers’ assessment of current business and labour-market conditions was more positive and they were considerably more upbeat about future economic and job prospects. Back-to-back monthly gains suggest that consumer confidence is on the mend and may be regaining the traction it lost due to the fiscal cliff, payroll-tax hike, and sequester – all to the benefit of higher demand for containerised goods.

Container traffic in the intra-Asian market remains a strong case, with solid demand growth despite the recent Chinese GDP weakness and a sliding Japanese Yen that makes imports more expensive.

The peak season is just around the corner and industry preparations are going on now in anticipation of more cargo to carry: reduction of idle tonnage, announcement of “rate restorations” and deployed capacity optimizations. Only time will tell if the current fight for turf in the industry leaves all participants in the red or demand surprises on the upside to provide black numbers across the board.

As we await the verdict of the jury as regards the implementation success of the announced freight rate adjustments Far East to Europe, we take a look at a bit more long term perspective by focussing on the opening of the longer and wider Panama Canal locks where – the focus will be on “who can actually enter through the new locks” and what will be the new “Panamax” vessel limits?

Put simply, the new locks are large enough to hold a vessel of the following dimensions: 49 metres in beam, 366 metres in length and 15.2 metres draft, which open up for 13,200 TEU ships going through. The dimensions of the new Panamax vessel are relevant in the light of the carriers’ high focus on network optimization, especially for routes going to the US East Coast (USEC). Why is this relevant? Because the large inflow of Ultra Large Container Ships exclusively into a low growth trading lane like Far East to Europe, has created an urgent need to deploy such tonnage onto other trades.

Contact online
BACK TO: Macro Economics - under pressure to deliver stronger performance NEXT: Tanker Shipping - crude oil tankers in the mixed zone

By Wei Zhuang
in Shanghai, CN