What we all seem to want is stable and sustainable economic growth within which to build our business, but what we are getting at the moment is recurrent minor shocks that shake our confidence and prohibit us from moving forward fast.
Listen to podcast of article

Global economy:
What we all seem to want is stable and sustainable economic growth within which to build our business, but what we are getting at the moment is recurrent minor shocks that shake our confidence and prohibit us from moving forward fast. Disruptions are coming from expected (EU) as well as unexpected (China) places, and all they do is remind us that the clear skies are coming, but some turbulence is expected on the road.

In spite of a rather weak start to 2013 in the major advanced economies, economic activity is expected to become gradually stronger as we progress further into the year. We now have a three-speed recovery with Europe in the slow lane, the US on the throttle – accelerating – and the emerging market and developing economies still going strong, according to the IMF. On the sidelines, we see that Japan is trying hard to escape the recent decades of poor economic performance by taking some extraordinary measure.

US:
The very strong monetary expansionary policy that has provided the US with a low interest rate and stronger banking system too has worked well to restore confidence in consumers and bring around solid GDP growth. Economic growth in the US rose to a 2.4% annual rate in the first quarter following a very weak end to 2012. The unemployment rate has fallen to 7.5% from a peak of 10.0%, but remains "well above its longer-run normal level", according to central bank Chairman Ben Bernanke. Who continues by saying that the "monetary policy has also helped offset incipient deflationary pressures and kept inflation from falling even further below the (central banks) 2% longer-run objective."

The US housing sector is also improving, with a potential to provide strong support to the overall economy. Confidence is being restored in that market as property values stabilise at a point in time where the FED is buying large amounts of mortgage-backed securities and interest rates circle at record low levels. The Fed is currently buying USD 85 billion a month in Treasury debt and mortgage-backed securities in an effort to stimulate the economy and lower unemployment.

The housing sector recovery recently reached "two significant milestones", according to Capital Economics. First, a double-digit increase in home prices in March from two leading indices. Second, the number of homes listed for sale went as high as 6.3 million in April. This means that the US recovery is well underway also in term of the housing market, and since homes listed for sale now exceed home sales, the market itself appears to regulate so that the recent strong price hike doesn’t create a new bubble. 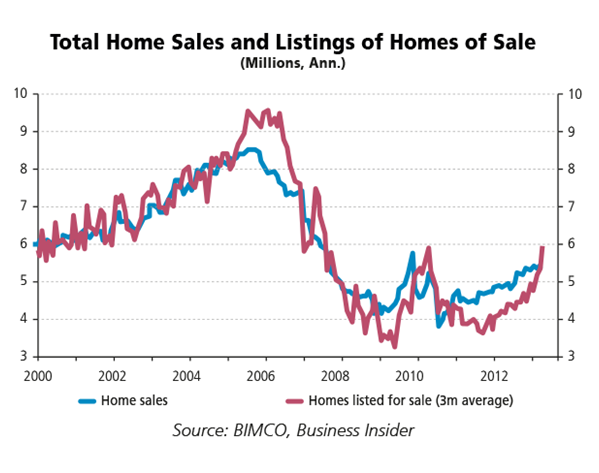 Asia:
In Asia, most focus is centred on the policy, known as "Abenomics" in Japan, which is a mix of monetary easing, stimulating spending and growth-inducing steps, including deregulation in sectors such as energy. Some also point to the need for a modernisation of the banking sector and the investment strategies of the large conglomerates for “Abenomics” to make a lasting impact on the Japanese economy.

Is this policy a risky business? Sure, and exit is needed at some stage. But as Japan is trying to shake the tree they need a bombastic start to change inflation expectations. For an economy that has been entrenched for two decades, a small change wouldn’t have done the job! Higher inflation is meant to push property prices up; a key driver for consumer prices.

India’s economy expanded less than 5% for the second months running. GDP in Q1 grew by 4.8% up from 4.7% in previous quarter. The slowdown may be over for now, but growth is set to be subdued as investments are slowing down and exports are weak in the shadows of the global recovery.

The HSBC/Markit China manufacturing PMI dropped in May to 49.2 from 50.4 in April. At the same time, the Chinese government's official manufacturing PMI rose to 50.8 in May from April's 50.6. Weak domestic and export demand being mentioned as the culprits behind the recent development of the two indexes. The two indexes are different in composition and have differed somewhat in the past too. 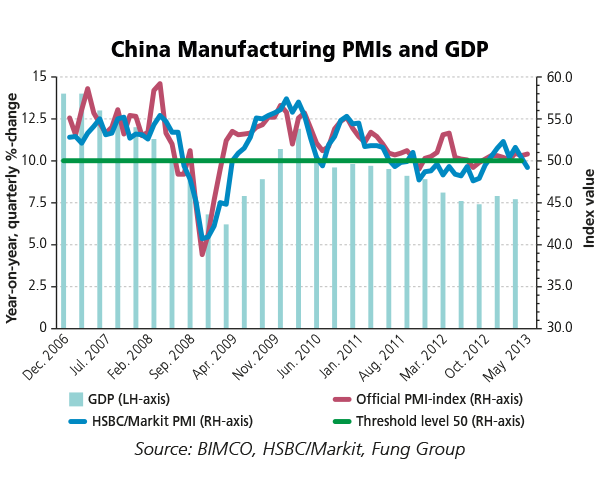 EU:
At the recent BIMCO conference “Perspectives in Shipping” in Paris, Mr. van den Noord of the OECD entitled this region the “funny place called Europe”. That place is characterised by multi-speed recovery paths but also with generally low growth. On the other hand, Europe has “a huge potential”. A potential that may be unleashed by a structural reform, something that Mr. van den Noord said was crucial to assist growth, build wealth and employment, but it was hard to convince the political leadership of this need.

In the Euro area, better conditions for periphery countries are not yet filtering through to companies and households because banks are still challenged by poor profitability and a low capital base, constraining the much-needed supply of credit to consumers. Private consumption is still very weak in the Euro area, something that container lines in particular are impacted by. The new record high unemployment figures is carving in stone the difficulty facing Europe on all levels.

Going forward, economic expansion in several economies will be held back by continued fiscal adjustment and competitiveness problems. This has brought about renewed discussion on whether to re-introduce economic stimuli.

Outlook:
As a positive result of the so-called “sequester” the US has lowered its expected budget deficit this year and next year noticeably. Government spending plunged at a 4.9% annual rate in Q1, but fortunately it doesn’t account for a decisive part of the economy. Public spending has been somewhat tightened for several years and austerity measures have been ramped up in 2013. Consumer spending – the decisive part of the economy, accounting for more than two-thirds of the US economic activity – rose at a 3.4% annual rate in Q1, giving much reason to be optimistic for total US economic performance going forward.

Q1-GDP growth disappointment in China has led the IMF to cut its forecast for Chinese GDP growth from 8.0% to 7.75% just two months after its April WEO (official Chinese target is 7.5%). The adjustment comes in response to the recent weakness, leading the Fund to state that China needs a “decisive push for rebalancing toward higher household incomes and consumption”. Such changes should put the economy on a more sustainable path and take the Chinese economy into the future in a constant growth drive.

Finally, Europe is looking better today than 1-2 years ago, but much work remains to be done on the political front to get the economy going.