Tanker Shipping - tanker demand in the US is in focus

Focus on the US and structural changes likely to impact tankers.

Demand:
The tanker market is doing full steam ahead – not in relation to demand, earnings or actual operating speed, but in relation to structural demand changes in the West. At the epicentre of this is the world’s most thirsty oil consumer – the US. Not to be missed by anyone, the US oil demand recorded a 16 years low in 2012. Back in 2005, the US consumed 20.8 million of barrels per day (m/bpd), in the same year the domestic oil production stood at 5.2 m/bpd. Today 18.6 m/bpd is consumed, 6.5 m/bpd is produced and imports of Canadian oil are the growth story. No wonder the tanker industry which provides seaborne oil into the US is in limbo.

Coincidentally with a lower and lower oil demand in the US, the US domestic production of crude oil knows only one way. In excess of 0.5 million barrels a day more is produced domestically over the past year as compared to the previous year. This has left inventories swollen and the surplus has put downward pressure on current WTI and Brent prices as well as on the forward curve for oil prices. A forward curve in backwardation (where future prices are lower than spot prices) is now the new long-term normal – leaving little incentive for traders to deploy tankers for floating storage.

Taking that into consideration our eyes turn to the new thirsty kid in the class, China. Since China is building refinery on a really large scale, import of crude oil is very relevant to focus on. Will China take more and more oil from West Africa and South America? And will this be enough to offset the decline in Western demand from the Persian Gulf, where Europe is also consuming at a smaller and smaller scale? The crude oil tanker industry surely hope so, as increased oil production in North America currently looks more likely to provide impetus for the product tanker industry.

In short the US distribution of oil product consumption looks like this: roughly half stems from motor gasoline, with another 20% coming from gasoil and 12% from LPG. There is no abrupt change in this going back in time, but more some gradual changes as can be seen from the graph below. Residual fuel oil, while not a big part of demand (2%) has experienced a tremendous drop, while all other products have experienced a drop of 0-30% compared to 2000. 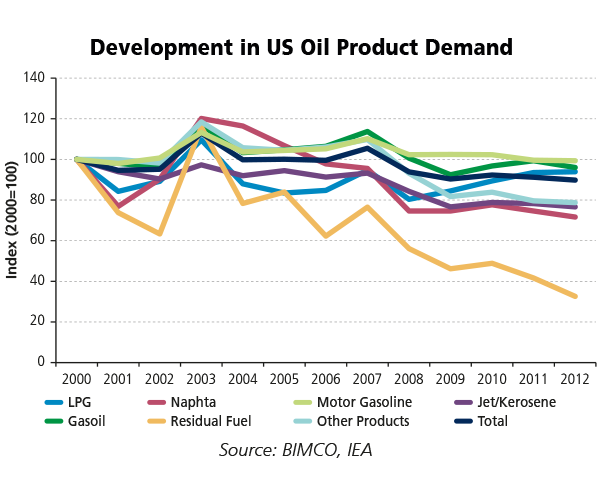 In the crude segment only 14 orders have surfaced in 2013 bringing the order book yet for delivery further down reflecting poor earnings. This is however a positive message to the troubled operators and owners who are active in the presently very poor crude oil market. Focusing on the crude oil tanker segment and newbuildings for future delivery, we find that 81 VLCCs, 62 Suezmax’ s and 42 Aframax are due for launch in the coming 3 years. While this is not gloomy in itself for the Aframax segment, it relates differently to the Suezmax and VLCC segment, where the orderbook-to-fleet ratios for both segments are 14%. Trouble is that future deliveries are building on top of a high inflow in previous years at a time when a new demand picture is being drawn up – presumable one that challenges these segments for some time going forward; this is the real worry.

BIMCO estimates crude tanker supply growth in 2013 to come in at 3.3% down from 4.4% in 2012. We expect the removal of special survey/intermediate survey (SS/IS)-due VLCC tonnage from “active trading” to positively contribute to limit fleet growth and forecast 10 million DWT to leave the active fleet on that account.

In our SMO&O December 2012 report we accounted for 60 VLCCs with SS/IS-survey due within the next three years. While going through that list with a fine-toothed comb we found that: 1 passed SS in 2012, 6 are now sold for conversion into FPSO, 30 are still active in trading (or expected to be), 3 sold to bunker specialists presumably for storage, 14 inactive/in lay-up, while that status for the last 6 VLCCs are uncertain. But it remains that no one has yet been outright demolished. 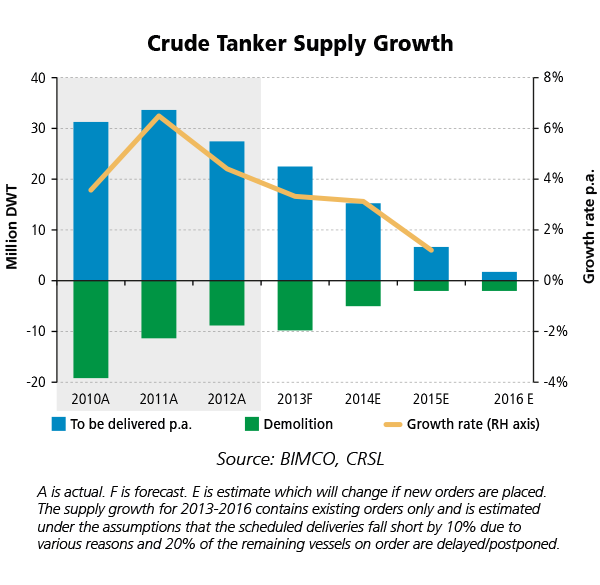 Outlook:
In October last year, the US exported more gasoline than it imported for the first time ever. Since then the gasoline imports have stayed low whereas exports have hiked. With gasoline imports down, transatlantic product tanker earnings should be down too. But contrary to conventional wisdom, the TC2 trading from Rotterdam to New York, a benchmark MR/Handysize route has delivered average earnings of USD 17,000 per day in 2013 despite low gasoline imports. So predicting anything on the back of that in the lead up to “US driving season” would be positive as US gasoline stocks are seasonally normal and domestic production expected to follow demand up during Q2. Is this making sense? Maybe not, but if gravity can be defied for once, let’s just enjoy it while it lasts. 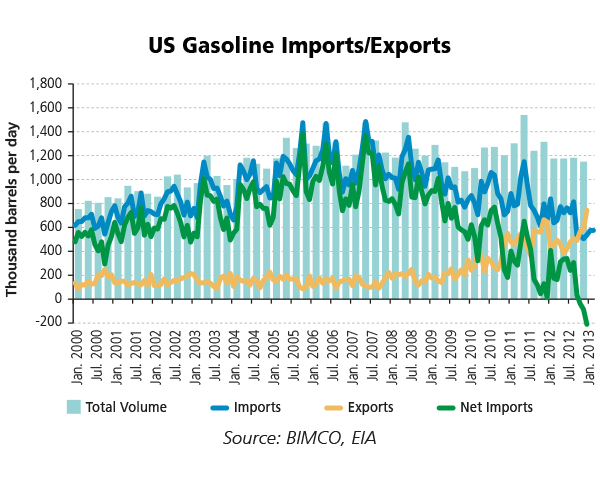 Where are MR newbuilding prices heading? Following a price range over the past year at USD 30-33 million, a recent announcement informed us all about 2+2 MR ECO-design units done in Korea at USD 29 million each. Such a price level represents a 10-year low for MR product tankers and may signal that newbuilding prices also for this “hyped” tanker segment can go lower along the lines of all the other tanker segments. If these tankers under commercially diverse conditions are able to “improve current t/c equivalent rate revenue by an amount of at least $3,000 per day” as presented by some owners in the press the jury is no longer out; THAT is game changing in favour of such tonnage.

Going forward the tables are also turning in terms of what nations is the most important for the tanker market. As the US is about to lower imports and raise exports, China seems to provide a more clear-cut case in favour of the tanker industry.

BIMCO expects that T/C equivalent average earnings for the VLCC segment will see more of the current hardship around USD 3,000-11,000 per day. Suezmax crude oil carriers are seen to hold on to recent gains at USD 12,000-22,000 per day. For the Aframax segment, expectations are that earnings have found balance around USD 12,000-18,000 per day.

In the product segment, BIMCO expects earnings on benchmark routes for LR1 and LR2 from AG going East to uphold high volatility which has lifted rates high in Q1. Going forward rates are expected to stay in the interval of USD 10,000-20,000 per day. Handysize and MR clean rates have both fared well in Q1 and are expected to stay in the positive mood with freight rates around USD 15,000-22,000 per day and USD 9,500-13,500 per day respectively.

Contact online
BACK TO: Dry Bulk Shipping - positive development in the earnings for smaller ships NEXT: Business case: Marine gas oil or scrubbers when operating in an ECA?