The first couple of months have been challenging for all ship sizes, but what was expected to become an extraordinary difficult year for Panamax owners has so far proven to be a somewhat positive surprise.

Limited inflow of new tonnage and very high volumes being transported establish light at the end of the tunnel.

Demand:
The first couple of months have been challenging for all vessel sizes, but what was expected to become an extraordinary difficult year for Panamax owners has so far proven to be a somewhat positive surprise. Time charter equivalent earnings have crossed the thin red line and moved into positive territory beyond the point of just covering OPEX. Driven strongly by the South American grain season, the strong demand for tonnage has led to increased earnings as well as congestion around the key grain exporting ports in Argentina and Brazil. On the overall level Algeria, Iran and South Korea currently increase imports, whereas top importer, Egypt, slashed its demand due to tightening FOREX reserves and higher focus on domestic supplies.

Supramax earnings have also been lifted as a result of increased South American demand, whereas even a large demand for the iron ore and coal transporting sea-stallions, Capesizes have not been enough to support sustainable rates due to a massive supply of vessels in this segment. Earnings for Capesize vessels averaged last year USD 7,680 per day; at the poor year-to-date earnings of at USD 6,300 per day, the Capes continue to be impacted by the overhang of tonnage. 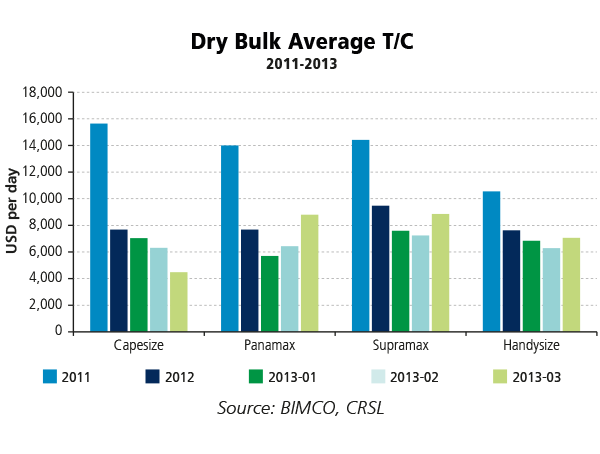 As the Chinese imports of coal reach record-high volumes, the question for ship-owners is: From where the bulk of the increased imports will be transported from? Nearby Indonesia has historically been the main trading partner with Australia coming in second. In the last three months, the balance has tipped in favour of Australia, which is good news for the shipping industry, as Australian coal has to travel 50% longer. As a consequence, the tonne mile demand of Australian exports to China was almost double that of Indonesia’s in January and February 2013. Australia and Indonesia made up 61% of the seaborne tonne miles demand for coal into China in 2012. The low demand in February is primarily due to the Golden week.

In 2012, China imported 53.7 million tons of coking coal, and 180.8 million tons of thermal coal, making thermal coal the main contributor to seaborne import demand of coal into China. As the growth rates for the two types of coal were similar in 2012, the main growth factor came from the demand for increased power generation. 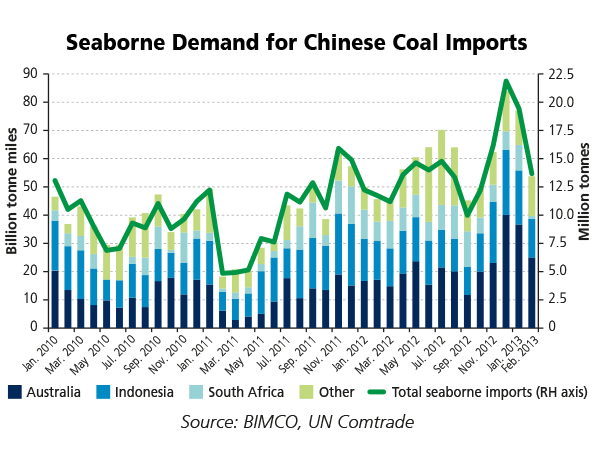 Affecting the exports from Australia, the world’s largest dry bulk commodity exporter, this year has been weather-related issues around iron ore export ports, most of all Port Hedland, as well as the coal ports in the Eastern parts of Australia. Due to cyclone and heavy rain, importers have to some extent found themselves in need of seeking alternatives for the shortfall of exports from Australia. Unless importing steel mills and traders decide to run down stocks the adverse weather conditions can prove to be one of the supporting factors behind the climb in March earnings alongside the development in coal demand export origins.

Supply:
Dry bulk deliveries continue at the expected pace. The first 11 weeks of the year has seen the delivery of 17 million DWT offset by 6 million DWT being recycled. It took just 7½ weeks to deliver the same amount last year, but the slower delivery pace is not impacting the fundamental balance between tonnage demand and vessel supply quite yet. And the reason for this? It’s simple: following four years in a row with higher inflow of tonnage capacity outpacing demand, it does take a bit more than just a few months of market improvements to affect earnings significantly. But we are now for the first time in five years moving in the right direction.

Dry bulk demolition activity hasn’t been concentrated on any particular sub-segment. Just like the previous years, the average vessel sold for demolition was of 59,000 DWT. In 2013, the age has so far been 27 years which is about one year younger than last year. Bangladesh has taken the lion’s share of this, buying 2 million DWT paying around USD 420 per ltd, which is 5% more than offered for the average dry bulk vessel sold for recycling.

On the contracting side, CRSL records new contracts for 76 vessels of a total capacity of 7.5 million DWT. For some reason 30 Capesize vessels are amongst the new orders, as if the Capesize fleet was in desperate need for new tonnage. In 2012 a total of 31 new Capesize orders were placed. Bear in mind that the Capesize fleet has double during the past 5½ years – from 756 to 1,513 today, prior to that the doubling time for a much smaller fleet was 13½ years. Fortunately the launches of all these new orders are not expected before 2015.

Of the recent Capesize orders, 75 percent have landed at Chinese yards and believed to be some kind of an ECO-design, with a still unknown improved fuel-efficiency. Taking some of the side-orders have been the 2012 Japanese merger of Universal Shipbuilding and IHIMU into Japan Marine United, which today holds the second largest order book amongst the Japanese yard groups - second only to Oshima Shipbuilding Co. 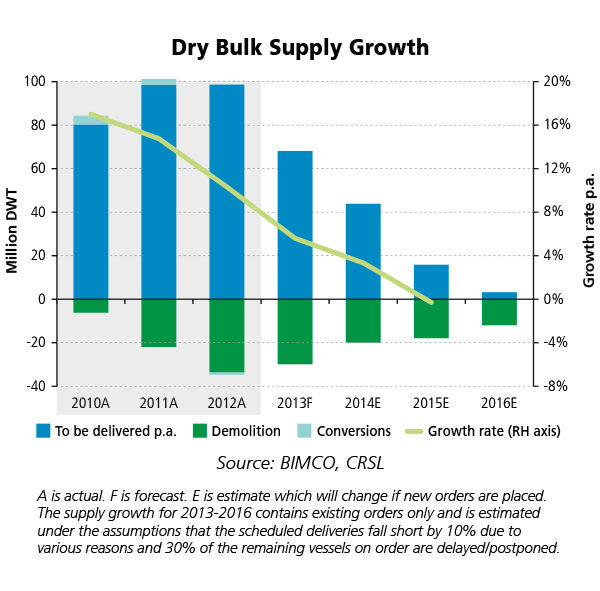 Outlook:
The delivery pace is expected to come down as close to 25% of all the tonnage BIMCO expects to see launched in 2013, has already been delivered during the first 11 weeks (20%) of the year. Should more than the expected amount of tonnage be built this will be a result of reduced slippage perhaps due to shipyard in dire need for cash paid down upon delivery. This is seen as plausible scenario but not our base-case.

For mysterious reasons the newbuilding prices for dry bulk tonnage seems to have flatten out in the course of the past 4-5 months whereas prices for tanker tonnage still seems to fade. This trend regarding dry bulk tonnage has been most significant for Capesize tonnage. This may have spurred some owners to “fish at the bottom of the market”, given some reason behind the recent Capesize order rush.

From the demand side BIMCO expects “more of the same”, which is solid volumes in grains and coal that will eventually lift freight rates beyond the level of 2012. With Capesize as the exception, strong volumes seem to support higher rates in the three smaller vessel segments – not sentiments.

Contact online
BACK TO: Macro Economics - mainly positive signs, but fiscal policies may hinder recovery NEXT: Tanker Shipping - tanker demand in the US is in focus