Global monetary policy easing, low interest rates and volatile inflationary pressure from goods, services, and assets is “dish of the day” as the global economy is desperate to shrug off the bad effects of the financial crisis that still haunts us.

We need strong US and Asian growth to uphold the global recovery, as Europe is still dragging its feet.

Global economy:
Global monetary policy easing, low interest rates and volatile inflationary pressure from goods, services, and assets is “dish of the day” as the global economy is desperate to shrug off the bad effects of the financial crisis that still haunts us.

Europe is still the Achilles heel when it comes to global economic recovery. As the internal issues in the Eurozone attract a lot of worrying attention, a helping hand from the monetary easing policies in primarily the US and Japan is lending a hand and providing some impetus for European exports.

With the leadership change now official completed in the world’s second largest economy, it will be interesting for the shipping industry to see if the coming decade of Chinese development will be along the lines of the past decade or if the focus will be different. Are the established high-volume trading lanes in and out of China about to be different in terms of more containerised focus and less dry bulk focus? We don’t know yet. Will the Chinese centre of attention be on the BRIC’s, the US, the EU or the nearby Asian region as its economic and political muscle increases? The veil will surely be lifted slowly – but the impact is likely to affect shipping extensively as it has done in the past.

US:
In the US, the budget sequester, which came into effect on 1 March, has captured the headlines by eventually cutting the US Federal Budget by USD 85.4 billion this year. The cuts come from reduced spending on the military, Medicare and a variety of other programmes. While fiscal austerity is needed, the timing is unfortunate, as the economic recovery in the US will be harmed by the sequestration; the IMF has reported that it will lower the US GDP growth outlook for 2013 from 2.0% to 1.5% as a direct consequence of the budget cuts. This is a setback but not a disaster as some have presented it. Bear in mind that the eventual budget cut of USD 85.4 billion is equal to just one single month of quantitative easing by the FED. In short, the sequester is merely the American word for austerity measures; measures that the most of Europe have had to swallow for years now to limit public budget deficits. In the longer run, tighter control of public spending may help stabilise the US economy and thus be a healthy mechanism.

Another negative impact from the sequester has been the lack of some public services e.g. during weekends from the US CBP (Customs & Border Protection), which has impacted the supply chain. But, with President Obama’s stop-gap spending bill from end-March the heat is off, at least for now, as it provided some flexibility to the agency that should ease this issue.

The unemployment rate shows an encouraging development, as it has been steadily declining throughout 2012, and the trend seems to continue this year, as we have to go back to 2008 to find a lower unemployment rate than the current level of 7.7%. 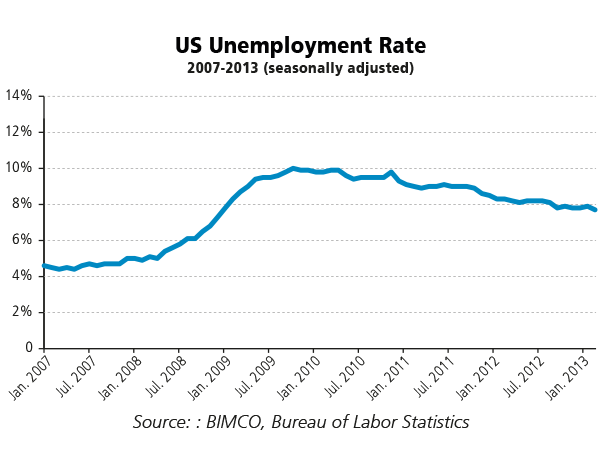 Asia:
With the appointment of Haruhiko Kuroda as the new Bank of Japan governor it remains to be seen whether PM Abe can materialize his election promises and turn around the past years slow growth and negative inflation. The financial market believes in a turnaround following a statement by Kuroda that he supports PM Abe’s target of a 2% inflation rate. More aggressive monetary easing is now expected as the USD-YEN cross exchange rates continues its slide, moving from high-70es in October last year to mid-90es by mid-March.

The leadership transition in China is now complete, with the official election of President Xi Jinping and PM Li Kequiang, who are expected to be in the new positions for the next 10 years. The two are set to put the consumers in the driving seat and loose some of the tight connections between the State and business life. This comes in connection with another primary target of cracking down on corruption. On the GDP target for 2013, China is rather downbeat, expecting just 7.5% down from 7.8% in 2012. Public spending is likely to go full throttle in the support of growth as Beijing targets an increased public budget deficit, indicating that the more private parts of the economy is expected to see a more challenging economic environment during 2013.

In a move to spur economic growth, the Indian central bank has now cut interest rates twice this year. But as consumer inflation is close to 11% per year and the public budget deficit is set to hit 5% of GDP for the second year in a row, the likelihood of more interest-rate cuts in near-term future is slim. It remains to be seen if the use of monetary policies to lift GDP growth will prove effective, as the nation needs less red tape most of all and legislation to encourage investments. Amongst the relevant areas that are suffering from lacking investments is infrastructure, the one with the highest profile.

EU:
With the recent stimulus package to Cyprus, the number of Eurozone countries having been bailed out by the EU and IMF rose to five. While the package, worth EUR 10 billion, pales in comparison with the bailouts given to Greece, Ireland, Spain and Portugal, it is symptomatic for the issues that continue to haunt the Eurozone. The unemployment rate is on the rise, and the Markit Eurozone Composite PMI for February indicated that the economy is still contracting.

Among the countries most severely hit by the weak economic climate is Spain, whose labour force faced a 26.2% unemployment rate in February. While the crises in Greece and Cyprus are manageable for the EU, a prolonged crisis in Spain poses a more serious threat to the general economic climate in Europe. IMF expects 2013 to be the final year with a negative Spanish GDP growth, and by 2017, the Spanish economy is expected to be back on par with the 2007 level. It remains to be seen if this will be enough to alleviate the Euro crisis, but the recent development in Credit Default Swaps fortunately indicates that the market is regaining its trust in the core Eurozone economies. 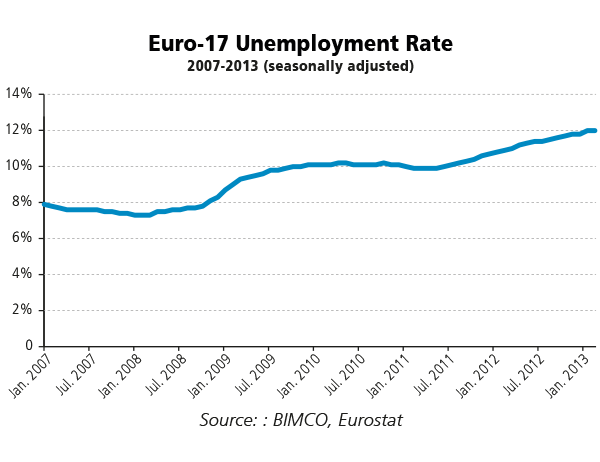 Outlook:
The first half of the year is on target to be just as challenging as anticipated. Moving closer to the presumably “better half of the year” – BIMCO still eyes a few hurdles that are needed to be dealt with before the economic indicators actually delivers the concrete improvements of the economy.

A continued victorious battling against the low and slow growth in Europe is needed, where the focus is likely to get back at France once the limelight is fading on Cyprus, Spain and Italy. A trustworthy political effort in combination with continued support from the ECB may finally lift some of the pressure on the haunted region. The same goes for the US where politicians should be focusing on finding a lasting solution to the Sequester issue.

In Asia, China has to focus on following the growth path that was turned around so positively in Q4 2012, as they make room for private consumption to play a bigger part. Last but not least the work is cut out for the leaders in India and Japan who has much work to do, in order to improve the conditions that pave the way towards a stronger economic development.

Now that a range of the major key economies are pursuing the same strategy even though the policy carries different names we could perhaps fear that the widespread use of monetary easing and other strategies basically including active monetary policy could lead to inflationary pressure.

Contact online
BACK TO: Container Shipping - the supply side responds to the low front-haul demand NEXT: Dry Bulk Shipping - positive development in the earnings for smaller ships