As BIMCO foresaw in the latest Shipping Market Overview & Outlook – an upward adjustment of freight rates as per announcements became essentially successful.

The supply side is improved by high paced recycling as the industry awaits stronger front-haul demand growth.

Demand:
As BIMCO foresaw in the latest Shipping Market Overview & Outlook – an upward adjustment of freight rates as per announcements became essentially successful. The rate on the Shanghai – Europe (Base port) went up from USD 999 per TEU to USD 1,366 per TEU. As demand remains weak in presence of economically troubled Europe the rollercoaster-freight-rate-ride has now repeated itself multiple times in the past 14 months. Most likely this will continue until the fundamental demand situation begins to improve.

While the volatility is high in the spot-focused Shanghai-originating SCFI, the index that takes into consideration ten major ports in China as well as long-term contractual rates (CCFI) is relatively more stable as well as more appropriate to capture the larger picture of container ship earnings. As can be seen the level on the China-Europe trades has dropped a bit from the highs of 2012, but still in safe distance of costly freight rate level in 2011. CCFI averaged at 1,167 in 2011, but rebounded to 1,523 in 2012. Average index value year-to-date on CCFI is 1,476. 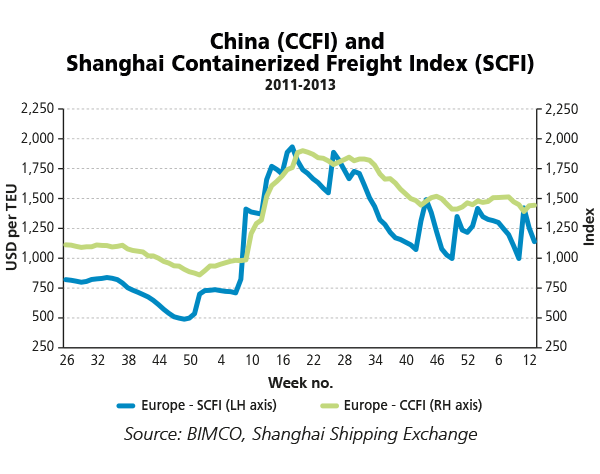 Turning the focus onto the less beaten paths of container shipping trading lanes, (e.g. Non-Main lane East-West, North-South Atlantic trades and intra-Asia), this is where demand growth is most interesting at the moment and where the smaller (2,000-3,000 TEU) and mid-size vessels (3,000-5,100 TEU) appears on the radar screen. These vessels are predominantly deployed on these trades that currently hold higher growth rates as compared to the low growth rate level on the main trades: FE-Europe and Transpacific. So why is it that the charter rates for these vessel types do not relish the positive development that the larger vessels on low growth trades have done since the turn of the year 2012/2013?

Two reasons behind this seems equally likely; Carriers are spoiled for choice due to excessively amounts of non-operating owner tonnage in these segments; Cascading is steadily pushing larger vessel sizes into these trades and make the current workhorses fight for employments as their cost base per transported unit is found comparably too high.

To complete the picture for the smaller and mid-size vessels it is appropriate to notice that fleet-to-orderbook ratios in these segments are minor. This is a clear signal that the brightest future is not to be found here. Surely there will always be a demand for these vessels but to another and definitely lesser scope than today. 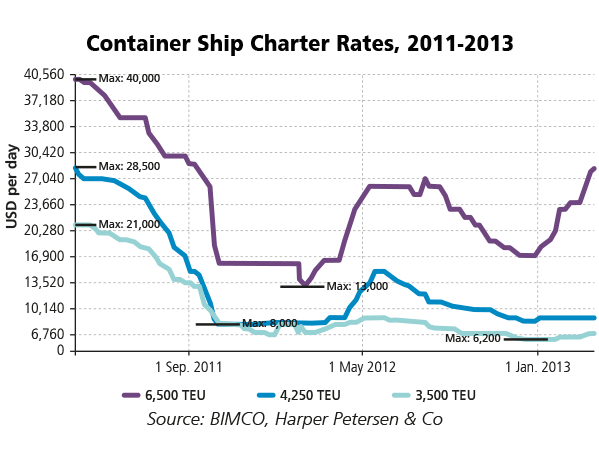 Supply:
Containership demolition is flying at high pace, at an annualized rate of 450,000 TEU during the first 11 weeks of 2013. If this holds up we are happy to revise the BIMCO demolition forecast, but we hesitate to do so yet, as we still see some risk that the hectic pace may dose off. Despite that, having 93,000 TEU (43 vessels) removed from the fleet so far in 2013, puts the fleet growth at just 0.8% for the year to date.

One of the latest demolition deals that are done included the largest boxship ever to be broken up. The 4,824 TEU “HLL Baltic”, built 1995 earned USD 425 per ldt, sold “as is” Singapore to be demolished in India. This event is very welcome to level off the capacity surplus of the fleet as such, but also as it is only the 6th vessel above 4,000 TEU to be sold for demolition. Since new deliveries are skewed towards the larger ship sizes the demolition of additional larger vessels are welcome.

The order book for containerships remain unchanged at 3.44 million TEU as delivery of the “smaller” sized (40 vessels of 5,874 TEU on average) vessels have been countered by new orders for larger tonnage (25 vessels of 9,578 TEU on average), largely for delivery in 2014 and 2015. 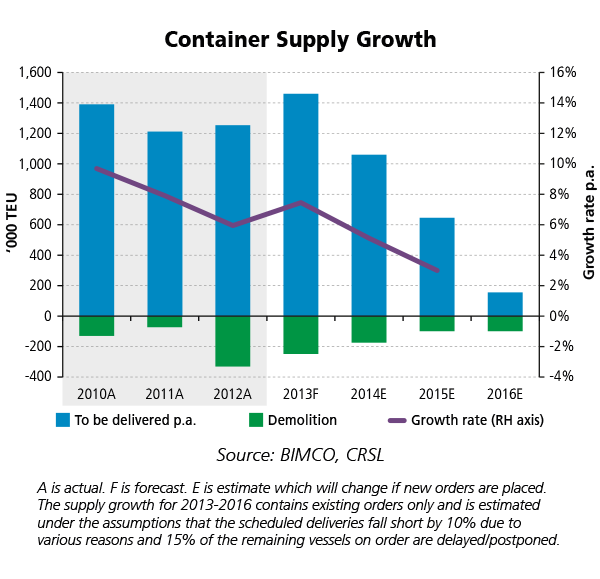 Outlook:
By mid-April we are meeting the announced implementation-date for a new round of freight rate changes one of the artery trading lanes for container shipping. A repeat of the mid-March success will be likely if the effect-given conditions are in place. Running up to that, focus will thus be on demand growth (or lack of it), cancelled sailings, the extent of laid-up tonnage as well as the number of individual carriers who actually are able to implement the announced intent to charge a higher freight rate.

On the supply side, slow steaming remains essential as a part of the present market balance. Slow steaming is closely linked not only to the poor demand side but also to the super-high bunker prices. Should bunker prices come down significantly in future the extent of applied slow steaming on the trading networks may be reduced by this.

A longer term trend that has developed since the outbreak of the global financial and economic crisis back in 2008 is the fact that more and more loaded boxes are sailed on the back-haul leg. This has meant that the front-haul/back-haul ratio has come down from 2.60 in 2008 to 2.07 in 2012. This results in more balanced trades with higher earnings possibilities on the total round voyage. This should improve profitability in the industry. But higher volume on the back-haul leg has no effect on the over-capacity situation as it sucks up no extra tonnage, only higher volumes on the front-haul leg can do that. 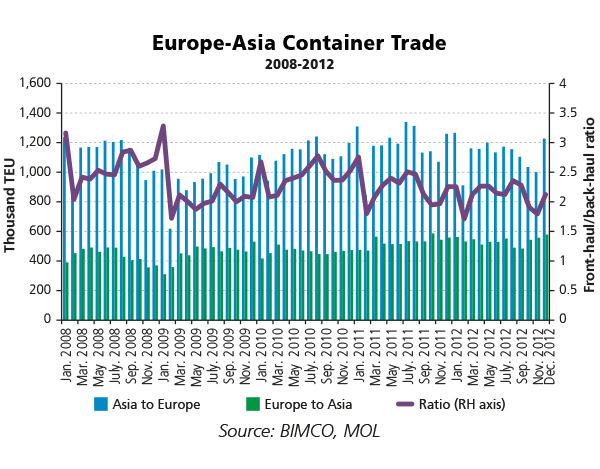