Container Shipping - new deliveries add to the supply side, on the demand side the US is up while Europe is down

There is room for some optimism in the container ship business, as witnessed by the number of loaded containers going into the ports on the US West Coast. Here, demand increased by 1.7% during 2012, more than making up for the fall in demand in 2011.

Higher freight rates on the main trading lanes lift optimism, while steady supply growth refuses to lend a hand towards an improvement in the fundamental supply-demand balance.

Demand:
There is room for some optimism in the container ship business, as witnessed by the number of loaded containers going into the ports on the US West Coast. Here, demand increased by 1.7% during 2012, more than making up for the fall in demand in 2011. This uplifting result was achieved in spite of a strike, which heavily affected imports into the port of Los Angeles in November and December. As a result of this strike, the containers expected to arrive in late November were delivered in December, explaining much of the discrepancy between the two months. 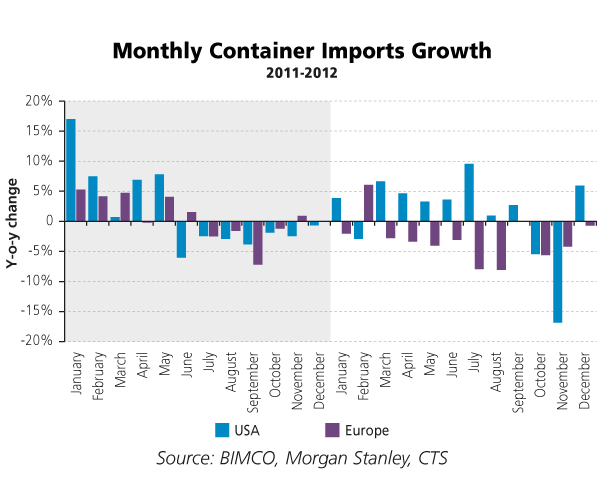 Estimates from Container Trade Statistics show that the full-year numbers for 2012 on the Asia-Europe trades could fall by 500,000 TEU as compared to 2011. This is very much due to weak demand from Europe as such and Southern Europe in particular. 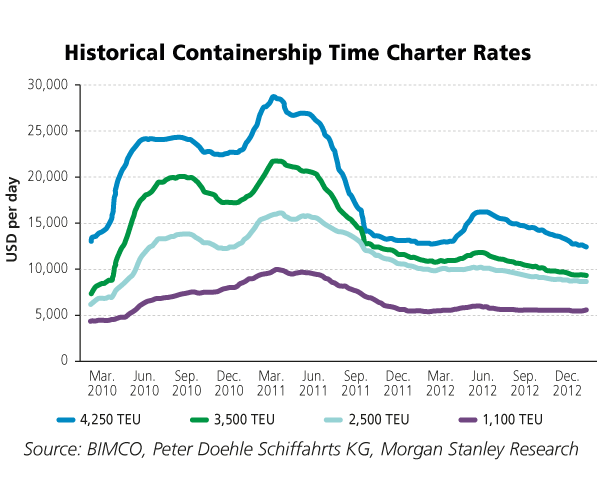 In the chartering market, time charter rates for tonnage in the range of 1,100 to 4,250 TEU have slipped back below the early 2012 levels following a brief flash of optimism at the middle of 2012. This new level is pushed down on the back of low demand for these vessel types. The slide could continue the downward trend if tonnage demand in the larger segments does not pick up and lift the demand for feeder tonnage subsequently.

The large container ships operate in a different environment than the small ones, as charter demand for ULCVs remains healthy. Supply is still relatively scarce, which is why the charter rates for these vessels are not under the same pressure as the smaller vessels with higher unit costs and an abundant number of uniform alternatives to choose between for charterers.

As demand for cargo grows sluggish and the supply of tonnage constantly hovers around 6-8% annual growth, something surely has to give. That something is the asset prices. According to Vesselsvalue.com asset prices for 2013-built tonnage in the range of 2,500 to 13,000 have dropped by 17.7%-20.7% over the past year. This value erosion only becomes direr the older the tonnage gets. Corresponding asset prices for 2006-built tonnage have dropped to the extent of 22.4%-25.2% over the past year.

Supply:
The container ship fleet is off to a flying start regarding supply, as the fleet has already been expanded by 112,951 TEU during January. This reverses the trend of low scale deliveries that took place during the second half of 2012. For the full year of 2013 BIMCO expects a level that will surpass that of last year and come in around 1.4 million DWT; a level which will lift the total available TEU by 7% after deduction of commercially obsolete tonnage sold for recycling.

Good news can be found on the demolition front, where January saw the third highest amount of container tonnage being sold for recycling. The strong number is third only to the two peak months in mid-2009. This bodes well for the industry and BIMCO remains upbeat on the likelihood for another strong year in recycling on top of an extraordinary 2012.

A total of 475 vessels remain on the orderbook for delivery between 2013 and 2016. With half of them scheduled for delivery in 2013, the container ship segment is where BIMCO expects to see the lowest slippage rate, as well as the lowest number of cancellations. This viewpoint is backed by what we have experienced in the recent past. In this respect, the container ship situation differs from that of tankers and bulkers, where you will see that the share of the orderbook that is scheduled for delivery in 2013 represent 61% and 71% respectively. BIMCO expects to see slippage ratios in those two segments to the extent of 25% and 30% still. 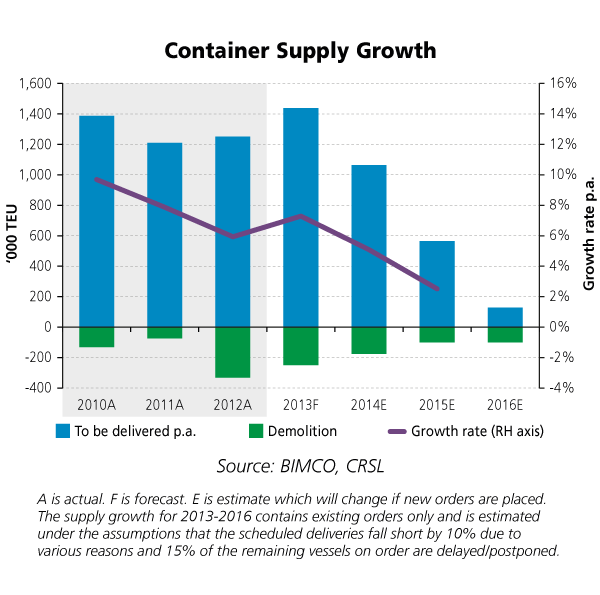 Outlook:
In the course of 2012, no less than 51 ULCVs (+10,000 TEU) were launched into the active fleet. In 2013 that number is likely to go down. BIMCO expects another 42 ULCVs to be delivered on top of the two that we have already seen in January. The impact from this will be felt in particular on the Far East to Europe trading lane, where these vessels are almost exclusively heading. This will mean that a bit more than 4 full strings (of 10 vessels each) will be added. They are likely to be put to work instead of smaller vessels on this trading lane, which will then be cascaded onto other trades in a snowballing effect across the market. This relates to the previous comment on charter rates for feeder tonnage, as these ship sizes can get into an even more difficult situation during the cascading process.

If history is anything to judge by, the freight rate lifts that have been experienced on the trans-Pacific and Far East to Europe trades in recent weeks may bring about rather decent average full-year rates. At the beginning of 2010 and again in 2012 rates went up from low levels to double up and quadruple up, bringing around a freight rate level that left room for subsequent rate slides throughout the rest of the year within healthy distance of break-even levels. 2011 was very different, whereas 2013 has started along the 2010/2012 positive lines. Most shipping lines have announced adjustments to the freight rate levels of Far East to Europe in March. Despite the low-season timing, BIMCO holds the opinion that an upward adjustment is likely to see the light. As the market is growing only very slowly, a fight for market share is unattractive and focus seem to be fixed on profitability.

In the lead-up to the Chinese New Year, the amount of idle containership tonnage went down slightly to 754,000 TEU (4.6% of total containership fleet). Going forward, BIMCO expects idling of tonnage to stay rather flat as the higher rates induce no one to idle further tonnage in spite of the fact that we are heading into a seasonal low in the coming months.

Contact online
BACK TO: Macro Economics - global economy is expanding, but some regions fall behind NEXT: Tanker Shipping - primarily positive prospects for products