China’s continued hunger for iron ore for its steel-making industry, alongside coal imports, is expected to become stronger in 2013.

China’s continued hunger for iron ore for its steel-making industry, alongside coal imports, is expected to become stronger in 2013. Steel for property units (housing), infrastructure and machinery are key drivers behind the commodity demand that spurs tonnage demand for larger dry bulk vessels.

Chief Shipping Analyst at BIMCO, Peter Sand, says: “As we are heading into 2013, iron ore demand from the world’s largest consumer, China, is likely to provide a solid lift in demand alongside coal imports in Asia. BIMCO forecasts Chinese iron ore imports to grow at a rate of 7.5% in 2013, up from 6.4% in 2012, driven by higher steel demand and the cost of the lower quality domestic ore.”

BIMCO calculations show that the Chinese iron ore content has declined since early 2008. This is good news for the dry bulk market, as it implies that the real cost of using domestically produced iron ore has increased.

The calculations provide a monthly forecast for iron ore imports, but the overview of the total iron ore input to the steel industry, domestically produced as well as imported is best seen on a quarterly basis, where also the falling quality of the domestic ore is highlighted. It is this issue that presents a strong case for growing imports going forward at the expense of domestic production alongside a general growth in steel demand. 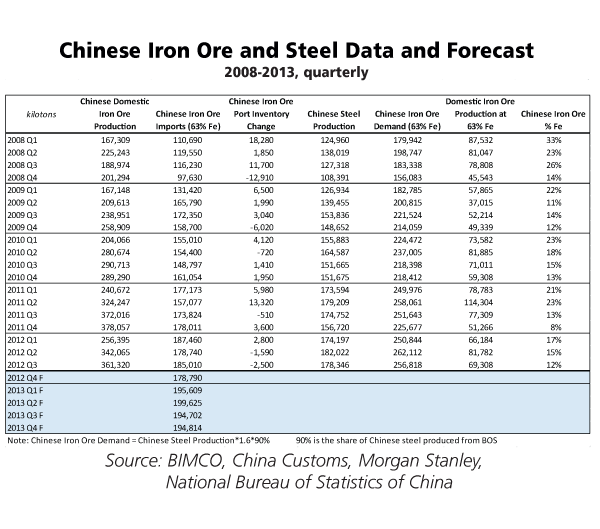 BIMCO expects that the monthly imports of iron ore in China will reach an average of 61 million tons in 2012. That number is expected to be higher next year, with a projection of 65 million tons of iron ore monthly. Aside from the declining quality of domestic iron ore, the demand driver for iron ore imports is the continued economic development in China, recently refuelled by the RMB 1 trillion infrastructure investment plans by the Chinese government. 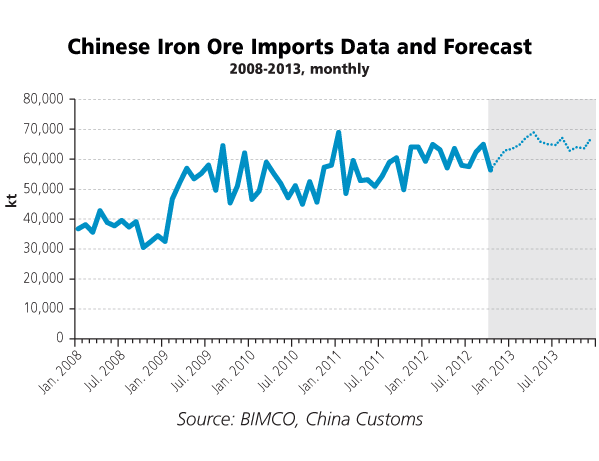 As a consequence of the 7-day National Day holiday in early October, a drop in the Chinese steel production led to a fall in iron ore imports that month. We expect imports to grow by a little more than 3 million tons in both November and December, making our 2012 estimate to be 730 million tons for Chinese iron ore imports – or 6.4% year-over-year. For 2013, BIMCO expects that China will increase its imports to 785 million tons – equal to 7.5% year-over-year. Translated into number of vessels, the iron ore import growth this year gives work to 39 Capesize vessels, with work for another 49 Capesize vessels in 2013 (estimating a Capesize that carries iron ore from Australia (2/3) and Brazil (1/3) can transport its cargo capacity 6.8 times a year).

As it stands, the Chinese appetite for iron ore ensures that Capesize earnings should stay above an average of USD 9,000 per day in 2013. The reason for this is the positive outlook for iron ore demand as well as expected continuously higher demand for power generation in China and India. In the medium run, coal is likely to be the main contributing factor in boosting the demand side of the dry bulk sector. As laid out in the most recent BIMCO Shipping Market Overview & Outlook, October 2012, imported thermal coal volumes to the three top buyers are expected up by as much as 10%. In the short run, spot rates for transportation of coal may suffer a hit, as stockpiles remain at very high levels up 49% y-o-y, leaving little desire for more coal imports right now, but the stockpile effect may be partially offset by an upwards trend in electricity production as winter is approaching.

“When we look into 2013, the fundamentals of the dry bulk segment are improving on both supply and demand side variables. We are still having a tonnage overhang but as we see global GDP improve, demand for dry bulk tonnage is also set to increase, driven by surging demand for iron ore and coal. This development should ease the pressure on ship owners and operators,” adds Peter Sand.

Contact online
BACK TO: New membership benefit: The latest in-depth information on the second-hand, newbuilding and recycling markets NEXT: Dry Bulk Shipping - will coal make up for the dissapointment in wheat exports?