As we are heading into Q4 our thoughts go back to the strong days during the end of last year. In spite of a recent strong return of Chinese iron ore imports, history is unlikely to repeat itself. Freight rates have been on the slide since mid-Summer and only Capes have resisted consistent erosion.

Demand is still growing slower than the fleet, but Chinese stimulus and Winter time just around the corner could reverse the sliding trend in freight rates.

Demand:
As we are heading into Q4 our thoughts go back to the strong days during the end of last year. In spite of a recent strong return of Chinese iron ore imports, history is unlikely to repeat itself. Freight rates have been on the slide since mid-Summer and only Capes have resisted consistent erosion. 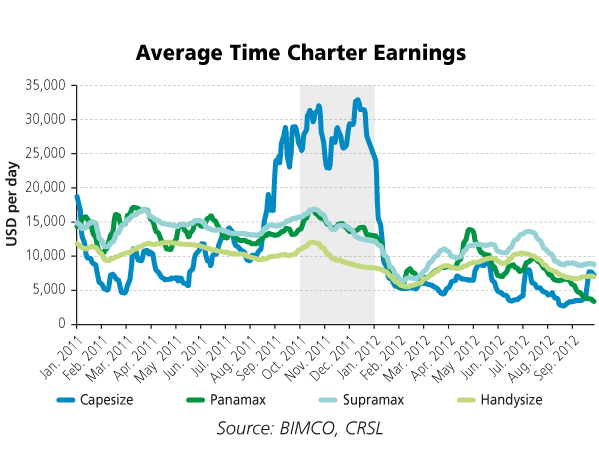 The flexible workhorses in the Supramax segments are weathering the storm better than the pack, if one judges only by average TC earnings. Standing in contrast is the devastating trend in Panamax earnings which is desperately looking for a reason to return above the waterline. Cargo growth remains on track for a 4% increase for the full year, revealing once again the supply side as the most significant factor behind the freight rate declines.

During the week ending 28 September, the largest amount of tonnage for iron ore in over a year was fixed. This is surely the first positive effect of the Chinese stimulus package, but an effect that will only prove to be sustainable if local Chinese steel demand picks up. The deep dip in prices on iron ore and steel was reversed during first half of September, causing a sigh of relief through the market. The optimism returned on speculation that Chinese steel mills would hike imports in the wake of the announced stimulus programme and prospects of increased steel demand. 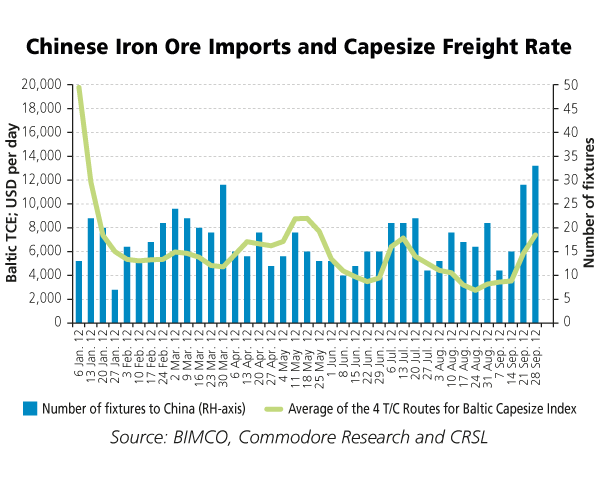 Due to weaker demand, the Chinese steel mills have been eating up stocks and hesitated to go for imports before a new price level was found. As the production costs of domestic Chinese iron ore mines is much higher than those of overseas mining companies, a lower commodity price is actually good news for seaborne imports as steel mills will then go for the higher quality imported ore.

There is much talk about the weather-related impact on seaborne shipping of grains, resulting in a development where the total grain exports is seen to drop by as much as 20 million tons this season, equal to y-o-y decline of 8%. This is affecting shipping negatively, as historically, grain exports have provided a consistent growth contribution in ton-mile demand. Both volumes and quality are affected. The crops of Argentina, Australia, the US, Ukraine and Russia are the big ones that are negatively affected, whereas Canada and EU are seen to increase exports slightly.

The rapid economic development in China has spurred the demand for power generation. As a consequence, China has gone from being a solid net exporter of thermal coal to one of the biggest net importers over the span of just a few years. CRSL expects thermal coal imports to be 122.8 million tons this year – and with an increase to 137.8 million tons (12% y-o-y) for 2013, it appears to be coal rather than iron ore that will lead the dry bulk sector out of the slump. India has also experienced a high demand growth, and is expected to be the second-largest importer of thermal coal in 2013 with imports of 128.5 million tons, second only to China. 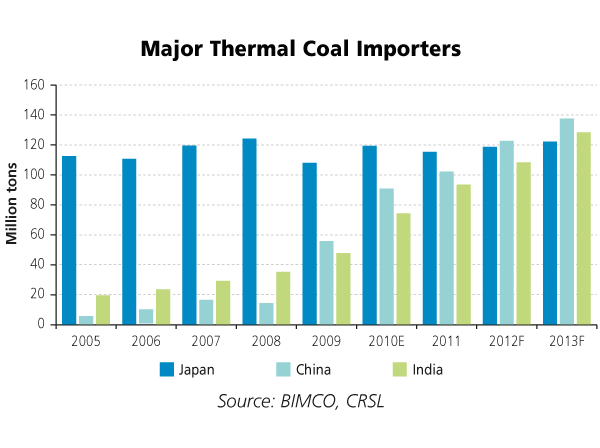 Supply:
What is behind the massive inflow of new tonnage in 2012? It would have made so much “more sense” for yards as well as owners to postpone and/or delay delivery and by that secure employment for workers for a longer period of time while the owners could avoid bringing ships into the already oversupplied dry bulk shipping market until it was absolutely unavoidable.

While our projections for the fleet growth in percentage have remained somewhat steady most of the year, the flows in and out have been much stronger than foreseen at the start of the year. The hectic delivery pace has surpassed the astonishing level of 10 million DWT a month several times, whilst demolition activity has breached the 3 million DWT a month level numerous times too.

What can be deduced from this? Probably that many shipyards are suffering under an intense lack of cash-flow. Whereas the payment structure of the contracts previously were mostly equally distributed or front-heavy from signing to delivery, the contracts that have been made more recently are likely to be back-end loaded, releasing the biggest chunk of the money to the yards closer to the completion and delivery of the ship. This could be one of many explanations that may eventually cause widespread bankruptcies amongst smaller and privately-held yards in the main shipbuilding nations.

The active fleet has grown by 8.8% since the turn of the year, as 964 new ships have now been delivered into a fleet that already stood at 8,901 dry bulk carriers at the start of the year. Fortunately, the pressure of 80 million DWT of brand new capacity being poured into the market has been eased to some extent by 375 over aged vessels being demolished. 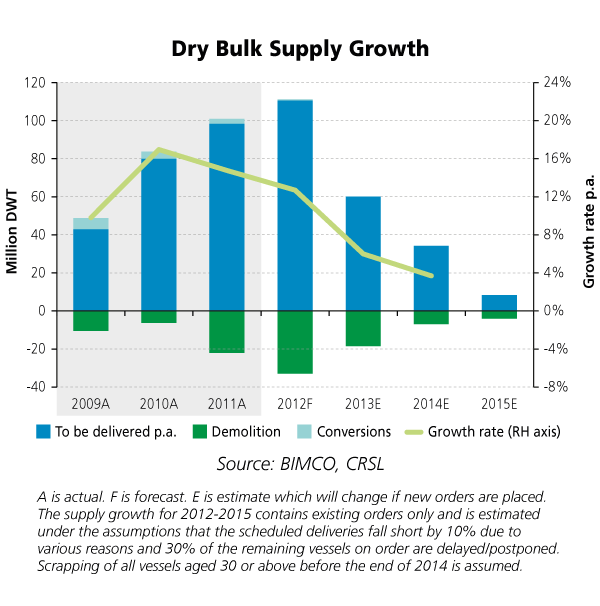 Ship owners continuously apply the demolition tool generously in order to improve the bad market conditions by cutting down on the supply side. Demolition activity in India, Bangladesh and Pakistan in particular is strong, with lots of dry bulk tonnage sold for breaking. Following the drop in demolition prices from the top in April prices have now moved sideways at a new lower level that has stuck around for some months now. 25 million DWT has now been demolished during 2012 with more to come, assuming that ship owners continue to be tempted by the recycling price level.

Outlook:
The former US Secretary of Defence Donald Rumsfeld once used the expression of the known knowns, the known unknowns and the unknown unknowns. Drawing a parallel to the current state of play of the dry bulk market, what does that translate into?

Well, we surely know about the supply-side challenge; that is a known known. We have already learned a bit about the negative effects that originate from oversupply but are we really aware of the full potential? No, is the most likely answer – that is the known unknown on this. If we try to comprehend the influence coming from idling, extensive use of slow-steaming, congestion, waiting time for the next fixture, the amount of tonnage that is being repositioned whilst ballasting etc., it is vital to understand that the virtual supply of shipping capacity is much smaller than actual supply. A full utilisation of the fleet and the effect on freight rates are known unknowns. A part of this scope is illustrated by AIS Live data adjusted by DNB Markets. This data shows that dry bulk average speed has come down from 14.7 knots to 11 knots, meaning that the fleet could sail 33% faster if demand required the operator to do so. Fascinating and scary, all in one go.

Finally, the unknown unknowns; when is the shipping market back in a sustainable fundamental balance. The forecasts and projections are many – but the feeling of a long way back is spooky but constantly recurring.

To sum up our forecast for the coming 6 weeks, BIMCO holds the view that Capesize TC Average rates are expected to fluctuate at low levels around USD 4,000–11,000 per day. Panamax is expected a tad higher in the USD 3,000-8,500 per day interval. For the smaller segments, BIMCO forecasts that the Supramax freight rates are likely to remain on top in the USD 7,000-12,000 per day interval. Handysize rates, set to move sideways and less erratic, are likely to stay at the interval of USD 6,000-9,000 per day.

Contact online
BACK TO: A premium of 25% on new-building prices is commercially viable for ECO ships NEXT: Macro Economics - Many uncertainties, but things go in the right direction