All stakeholders in shipping realize that the business is cyclical, and the most important challenge is to predict the ups and downs and plan accordingly.  But few had in their wildest fantasies predicted the financial crisis that hit the world four years ago, and the significant drop in cargo volumes and the major impact this had on all shipping markets.

All stakeholders in shipping realize that the business is cyclical, and the most important challenge is to predict the ups and downs and plan accordingly. But few had in their wildest fantasies predicted the financial crisis that hit the world four years ago, and the significant drop in cargo volumes and the major impact this had on all shipping markets. The banker calls it a “black swan” but was it really? In this article we have tried to reflect on the four years that have passed and the immediate outlook for the coming years.

In the years leading up to the Beijing Olympics back in 2008, the shipping markets lived up to the Olympic motto in many ways. The motto goes “Citius, Altius, Fortius” – Faster, Higher, Stronger. Vessels sailed at full speed to keep up with demand, rates went higher than ever, and the shipping industry was a truly lucrative business. Demand was triggered by the massive development in China that drove the dry bulk markets to unseen heights, while the demand for liquid fuel and strong appetite for containerised goods similarly benefitted the tanker and container segments.

Then the economic crisis happened. Chief Shipping Analyst at BIMCO, Peter Sand, says: “as the economic crisis broke in the middle of 2008, shipping demand evaporated almost overnight. Exacerbated by widespread mistrust amongst banks and the subsequent withdrawal from financing letters of credit, cargo flow came to an abrupt halt with an immediate impact on shipping. The poor market conditions lasted to the fourth quarter of 2009, when liquidity was eased, cargo started to flow in great volumes and the market bounced back from a 12.5% drop in world trade from 2008 to 2009 to a remarkable 13.1% recovery during the following 12 months. But the enormous new-building spree initiated in the pre-crisis years is the culprit that continues to haunt ship-owners.”

Global economic growth
It took the advanced economies more than two years to get back beyond the GDP-level of 2007. Moreover, high volatility in the financial markets, significant economic challenges in the EU and the US and IMF’s successive lowering of expectations to future GDP growth continue to block the road to recovery and thus bring sustainability and lasting prosperity back to shipping. 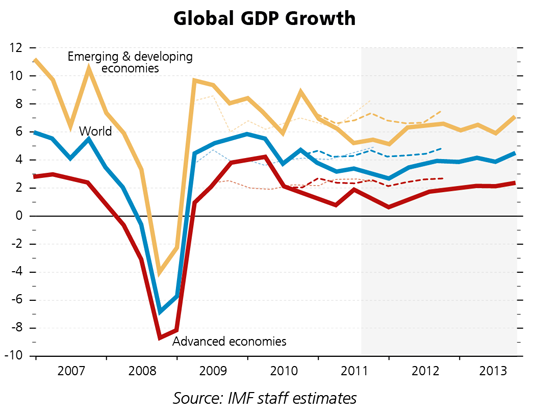 Although world trade continues to grow, this growth is unfortunately out-matched by the continued supply of new tonnage ordered in the pre-crisis years. This is the overarching reason behind to the major challenges we experience today across all main shipping segments. 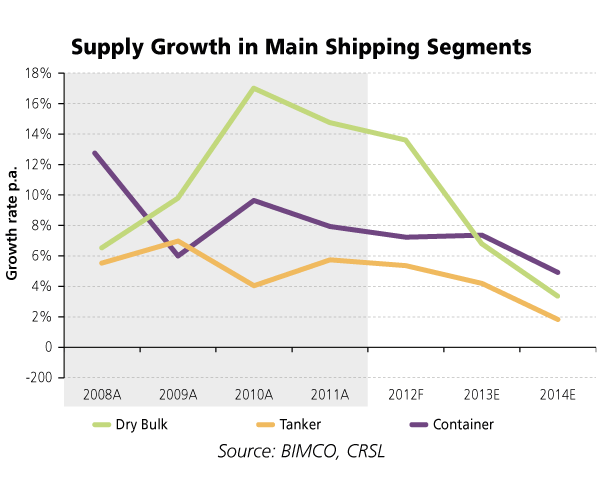 Dry bulk fleet growth
As a response to the huge appetite for dry bulk commodities, especially from China, in mid-2000s, ship owners went on an ordering spree in 2006, 2007 and 2008. Four years on, a large chunk of these orders have now been delivered. Since the 2008 Olympics, the Capesize fleet has grown by 95%. 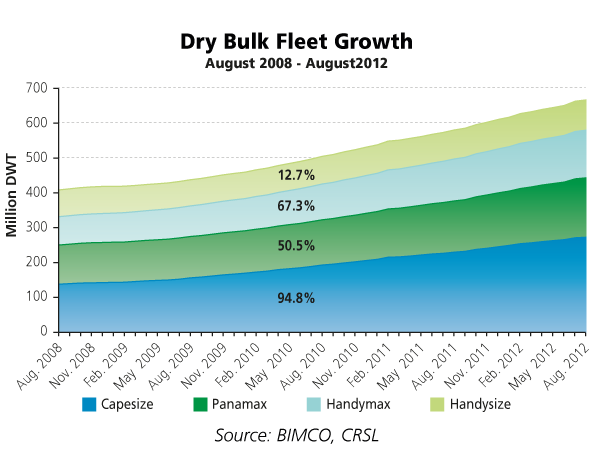 With an average size of 196,533 DWT per ship – which is able to carry an estimated five times its own DWT-capacity per year – the new Capesize fleet is able to cater for 663 million tons of new demand. According to CRSL, the demand growth for Capesize vessels only equalled 482 million tons during the same period of time, resulting in a dramatic oversupply of Capes.

Tanker market
At the beginning of August 2008, 492 VLCC of 146 million DWT comprised the fleet. Today the fleet holds 633 VLCCs of 193.1 million DWT according to VesselsValue.com. This is an increase in capacity of 32%, which is double up from the previous four years’ period leading up to the Beijing games (16% fleet growth). Going forward from the London games, supply growth is set to be more subdued as the current order book to active fleet ratio is 15.8% for the VLCC segment with delivery in 2012-2015.

Freight rates
With spot earnings and time charter rates peaking four years ago, the markets since then have been on a rather bouncy road, and the current doldrums do not give any indication of a sustained recovery. The peaks and troughs illustrate how tight the market was in the first 2/3 of the year leading up to the Olympics in 2008, while the subsequent drop illustrates the new reality of very tight freight rates. One could say that the freight market took a deep dive from the platform in 2008, and ever since the market has been struggling to stay afloat. Nowadays, Capesize earnings are as low as ever, and the VLCC rates are below operating cost. 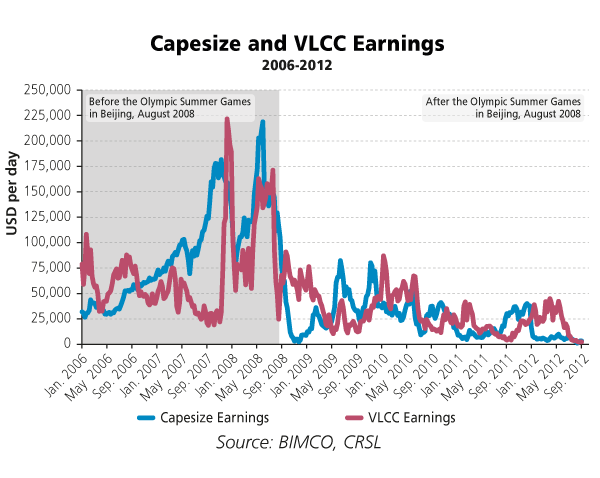 Bunker fuel rollercoaster
The bunker price, however, has returned to previous high levels. On 8 August 2008, fuel costs were at USD 673 per tons. As can be seen from the graph below, the prices have experienced a rollercoaster ride during the crisis, only to return to pre-crisis levels. At the same time, freight rates have tumbled by more than 90%. Looking ahead the situation is not clear; most would expect the fuel price to rise but DNB Markets have now announced that they expect a fall in oil prices already during 2013 if the production of shale oil and gas continue to pick up, as is the case right now in e.g. North Dakota and Texas. This could have a positive impact on the cost side of shipping but it will not resolve the supply/demand imbalance! 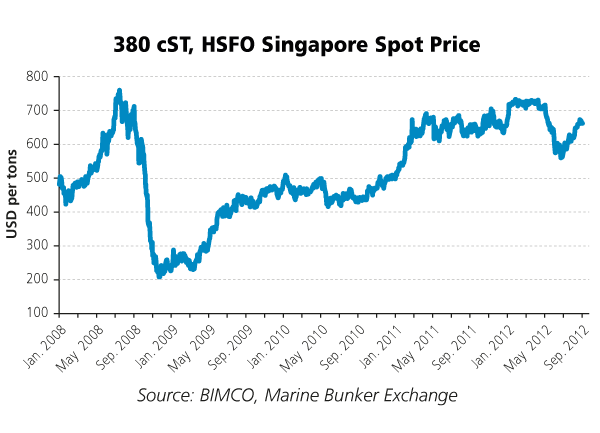 Outlook – the next four years
The four years leading up to the games in London are indicative of the perfect storm: Falling demand, high supply growth and increasing bunker prices. When it comes to the outlook for the coming four years leading up to Rio de Janeiro lighting the Olympic Torch in 2016 one may be cautiously optimistic, with the continued growth in world trade (although at a slower pace than we have seen over recent years), with the slowdown in the ordering of new-buildings and increased recycling, contributing to a more balanced scenario in supply and demand.

The most important driver will be the global and fundamental economic development, and here two issues are likely to be decisive for our industry the next four years. First, the governments in the US, Japan and EU countries (in particular Portugal, Italy, Ireland, Greece and Spain) must find a way to stabilize their economies and bring consumer confidence back to normal and thus facilitate sustainable growth around the world. The political tools to do what is necessary are available; what is lacking is apparently the will to do so. Moreover, the BRIC countries mustn’t lose their momentum and should, as major economies, assume their responsibility too for the well-being of the world economy.

Second, the current newbuilding overcapacity in shipyards should be utilized for purposes other than building new ships. The shipping and the shipyard industries are in the same boat, struggling with oversupply and with a mutual interest in finding a lasting solution. Admittedly, it is not an easy task to move away from producing new ships and to start to focus more on ship repair, ship recycling or alternative heavy industry jobs in future – but it will be necessary to maintain the work-force and the know-how in the short-term. The worst possible scenario would be shipyards offering new-buildings at rock-bottom prices to an already oversupplied shipping industry.

Keeping focus on the supply side remains vital to all segments and all participants, as the overhang of tonnage is very challenging.

“Fortunately, the growth rate for world trade of goods is likely to bottom out this year with trade set to grow at a faster pace in 2013 and going forward. This should move markets closer to a better balance between supply and demand, creating sustainable earnings for the ship owners as we approach Rio 2016 Olympics” adds Peter Sand.

This, coupled with a notable reduction in the ordering of new tonnage, should move markets closer to a better balance between supply and demand, and in turn improve earnings for the ship owners. However, the market conditions continue to be very challenging in all major segments and probably will be for another couple of years. Major banks are withdrawing from financing shipping, and this may very well lead to foreclosures but could also bring with it some form of consolidation. In the current market, cash rich ship owners and investors will be tempted to acquire both tonnage and companies.

To wrap up, we continue to be optimistic about the future. The shipping industry is cyclical and will eventually bounce back. Despite the current volatility, the financial markets, world trade, the world economy and freight rates will find their way back to normality stimulated, it is hoped, by political resolve and the will to do what is necessary.

Contact online
BACK TO: Tanker Shipping - Low demand growth and an ever increasing fleet impact the market conditions negatively NEXT: A premium of 25% on new-building prices is commercially viable for ECO ships