Overall annual oil demand growth in 2012 is now expected to come in at 0.9% by the IEA (+800,000 barrels per day), close to last year’s 0.8%, which was a 10-year low (excluding the contracting years of 2008/2009). The rise is exclusively originating from non-OECD countries. The outlook was modestly curtailed by early July on the back of the weaker global economic situation. This translates into a rather slim fundamental support to the tanker segment, but fortunately tanker shipping is so much more than overall oil demand.
Low global growth in oil demand combined with constant growth in the world fleet continues to impact market conditions negatively.

Demand:
Overall annual oil demand growth in 2012 is now expected to come in at 0.9% by the IEA (+800,000 barrels per day), close to last year’s 0.8%, which was a 10-year low (excluding the contracting years of 2008/2009). The rise is exclusively originating from non-OECD countries. The outlook was modestly curtailed by early July on the back of the weaker global economic situation. This translates into a rather slim fundamental support to the tanker segment, but fortunately tanker shipping is so much more than overall oil demand.

Following the very strong oil import figures from China in April and May, the import level has come off somewhat. China still remains the major driver behind the growth expectation for 2012 as it is expected to consume 363,000 barrels a day more than last year, which equals 3.9% growth in 2012 or 9.758 million barrels per day in 2012. In Q4 China is expected to consume in excess of 10 million barrels per day.

The start of the US driving season provided increasing import levels of motor gasoline going into the US. Nevertheless, freight rates have continued to disappoint when compared to last year. Gasoline stocks are still low, despite a moderate import level and high domestic production. However, the abundant number of vessels chasing down the cargo proved to be overwhelming. As apparent by earnings on the TC2 benchmark route, demand supported freight rates until mid-June until the slower-than-hoped-for consumption meant that the amount of gasoline available to costumers was sufficient. 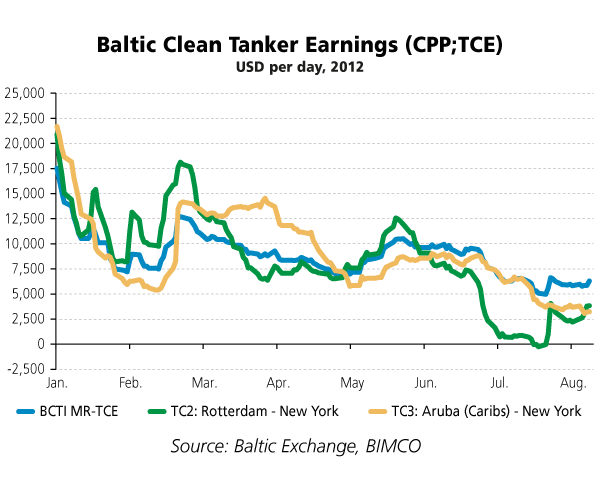 It is just really difficult to find the optimistic stories in the tramp shipping sectors right now, not least in the crude tanker segment. Estimated VLCC rates on benchmark TD3 from AG to Japan have now been below zero since the beginning of July, spelling out the impact stemming from lower Chinese imports as well as a heavy burden coming from the supply side of the freight rates equation.

In the Atlantic basin, the increased output of oil in Canada and the US Midwest could make demand for crude oil tankers into the US head South, as refiners from shipping-intensive regions of the Gulf and East Coast are becoming less competitive domestically due to large input price differences. Over the past two years refiners have seen crude oil prices across the country diverge to such an extent that refiners in the Rocky Mountains and Midwest pay USD 20-30 less per barrel than their costal peers. According to US Energy Information Agency (EIA) this has consequences for the input of the refineries. While the East Coast and West Coast refineries demand less oil today, the Rocky Mountains and Midwest refineries that have access to the discounted land-locked crude oils have had the highest growth rates of all regions. The two of them demanding more than 200,000 extra barrels per day (+5%) as compared to a year ago. The good news for the shipping industry is that the single largest refining region – the Gulf Coast with 57 refineries and half the nation’s refinery capacity – also experienced an increase of 235,000 barrels per day (3.2%). 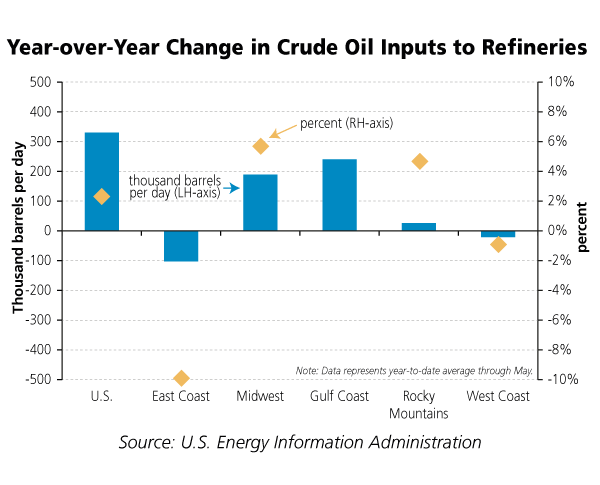 Supply:
In spite of sliding demolition prices, owners have not hesitated to continuously sell vessels for demolition. For tanker tonnage and general cargo tonnage excluding China, the prices have now reversed the falling trend. But prices are far from stable. Several product tanker owners have taken advantage of the firming of the prices, with 360,000 DWT sold for demolition in July bringing the 2012 total up to 1.6 million DWT. The average age of the recycled tankers was 25 years. 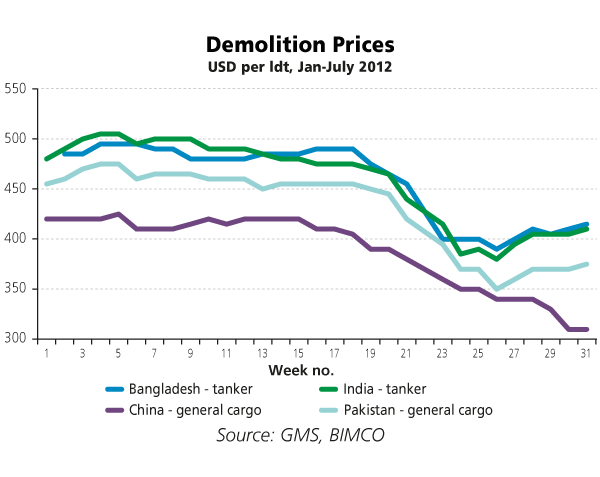 With 18.7 million DWT of new deliveries, the crude tanker fleet has now grown by 2.9% in 2012. Deliveries have been especially heavy in recent months. Amongst the noticeable entries are 11 new VLCCs. During the same time, only one 20 years old double hull VLCC has been sold for demolition. New crude tanker orders remain scarce, leaving the crude tanker order book down by 12% from just two months ago. Order book to fleet ratio in crude tanker segment is now at 13.8%. 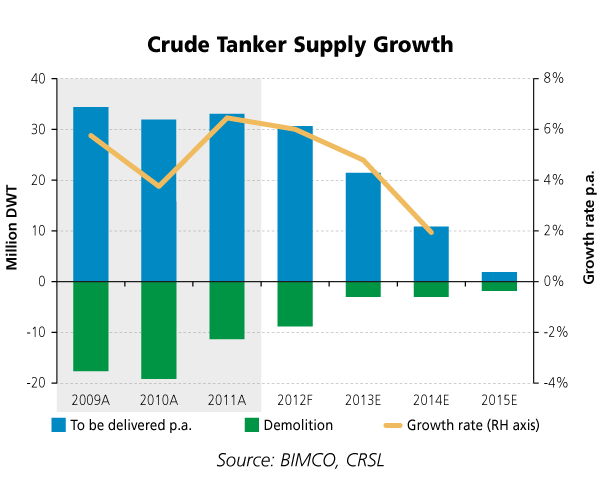 The product tanker fleet has grown by 1.5% so far in 2012, as vessels equal to 3 million DWT have been delivered, offset by 1.6 million DWT being demolished. As the demolition activity has been hectic in the past couple of months, the active fleet has grown only little since the last report. However, BIMCO still expects the full year product tanker fleet growth in 2012 to settle just above 3%. New contracts for product tankers have maintained the level of the previous two months, as 16 new orders have been placed. Total orders in 2012 now amount to 3.35 million DWT leaving the order book more or less unchanged.

Outlook:
As the economic fundamentals have failed to improve in recent months, as illustrated by the US ISM Manufacturing Index, the short-term US oil demand outlook is a bit bleak. From an oil consumption perspective, the all-important US manufacturing sector has fared particularly badly recently, a bad omen for distillates in particular, as the ISM index fell below the key 50-threshold for June and remained submerged in July. It’s the first time the indicator has fallen into the contractionary area since July 2009.

For 2012 as a whole, US oil consumption of 18.7 mb/d is anticipated, down 1.0% y-o-y. The International Energy Agency forecast US oil consumption to remain relatively low in the near future, before returning to a rising trend during the Winter of 2012/2013. Not only is the underlying economics expected to marginally improve in the later stages of the year, but also an assumed resumption of more normal Winter weather conditions are expected to support heating oil demand.

The positive drivers that could benefit the market could be a continued growth in demand from China, which already in Q4 in 2012 is expected to consume in excess of 10 million barrels per day. Moreover, it would be beneficial to the market if the big oil consuming nations in the Far East would seek to satisfy their crude oil need in West Africa rather than continue to import heavily from the Persian Gulf. This would bring around a much needed boost to tons-miles.

Handysize and MR clean rates are expected to remain under the bad influence of a slowing manufacturing sector, both East and West of Suez. Freight rates are suggested to linger at USD 2,000-9,000 per day. BIMCO expects earnings on benchmark routes for LR1 and LR2 from AG going East to continue at recent endurable rate levels around USD 7,500-15,000 per day, with downside risk coming from the manufacturing sectors if the global economy does not improve.

Contact online
BACK TO: Dry Bulk Shipping - Handling the supply side challenge remains top of the agenda NEXT: From Beijing 2008 to London 2012 – Reflections on four extra-ordinairy years in the shipping industry and looking beyond