The summer lull in the freight market is soon to be over as we enter into the seasonally-stronger final five months of the year. Hopefully, this will bring around higher earnings, but the outlook is unlikely to support a joyride similar to that of last year. The Baltic Dry Index (BDI) currently stands at 843 (August 6), a level which is 53% below the average of the final five months of 2011.

As GDP growth slows down in China and India, so does demand for dry bulk shipping. Focus on handling the supply side challenge remains top of the agenda, including demolition activity that stays strong.

Demand:
The summer lull in the freight market is soon to be over as we enter into the seasonally-stronger final five months of the year. Hopefully, this will bring around higher earnings, but the outlook is unlikely to support a joyride similar to that of last year. The Baltic Dry Index (BDI) currently stands at 843 (August 6), a level which is 53% below the average of the final five months of 2011.

It has been a rather poor year for dry bulk sector earnings. This can be illustrated by the fact that the BDI should increase by 188% throughout the rest of the year from the current level at 843 in order to reach the same annual average in 2012 as it did in 2011. An increase of this magnitude would require a flat-level BDI at 2429 throughout the remainder of the year. Such a level would then be almost equal to the average of the final five months of 2010. Despite a clear seasonal pattern, a strong comeback like this looks unlikely.

Dry bulk freight rates have been under significant pressure since the most recent fall off the cliff in Mid-December 2011 after a most pleasant joyride since Mid-August 2011. As judged by the BDI, the market has been 30% lower in the first seven months of 2012 as compared to the same period in 2011 and a staggering 68% lower than in 2010.

The situation in the Asian coal market is beginning to look slightly better recently, as prices are now appearing to bottom out. During the past three months Australian coal prices have dropped more than 25% in the wake of oversupplied markets and a weaker than expected Summer consumption. Meanwhile, Indonesian coal prices are still falling and production cuts are likely to continue to weigh against this. On the back of developments so far in 2012, Indonesia is now expecting exports to stay at an unchanged level from last year. 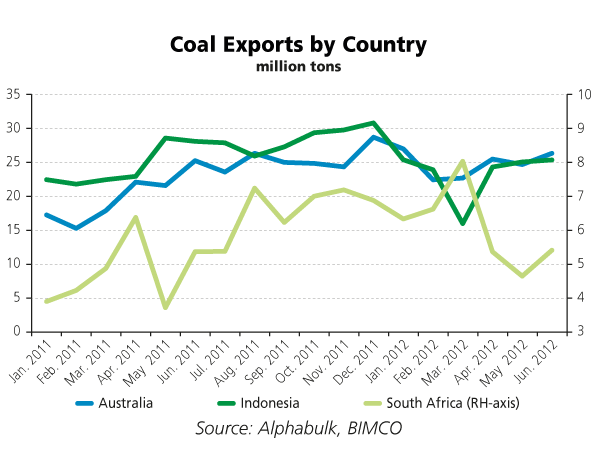 Total coal exports from Australia and Indonesia are up by 8.6% in the first half of 2012, as importers took advantage of the lowering of prices to stock up. Last year’s top dog, Indonesia, is again dwarfed by big brother, as Australian demand recovers from the 2011 flood and shot up by 24% y-o-y in H1-2012, during the same period of time where Indonesian exports dropped 4%.

China’s coal imports rushed forward by 65.9% to 139.85 million tons according to China National Coal Association (CNCA), up from 84 million in first half of 2011. Meanwhile, domestic production surged by more than 100 million tons. CNCA reported that consumption was up by just 53.7 million tons (2.2%), concluding that the Chinese coal market is expected to remain oversupplied in H2-2012 due to weak demand coupled with rapid growth in supply. Should this result in lower imports, it will be unpleasant for shipping demand.

Supply:
Another 20 million DWT have been delivered over the course of the previous two months from the busy shipbuilders in China, South Korea and Japan. This brings the total year-to-date deliveries up to 67.5 million DWT, equal to the total dry bulk deliveries during the three years of 2004-2006. This means that the active fleet has grown by 8.0% since the turn of the year.

Fortunately the ship breakers in India, Bangladesh and China have also been busy bees. Weighing against the inflow of newly built ships is the 18.3 million DWT of demolished tonnage that has left the sea. Capesizes and Panamax vessels are responsible for the lion’s share of this with 11.6 million DWT. 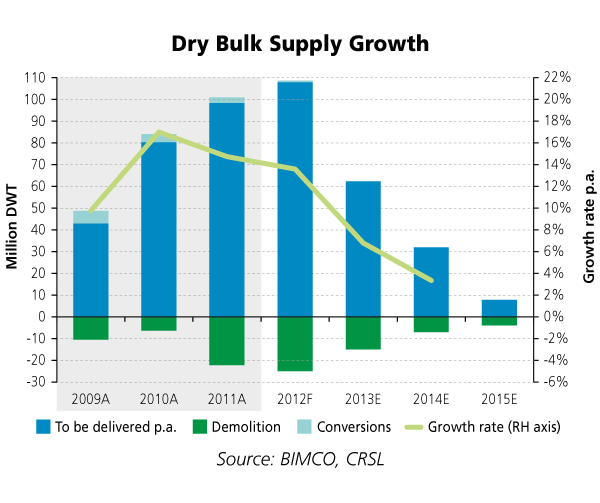 The Panamax segment seems to follow in the footsteps of the Capesize segment, with a huge influx of new vessels in the first seven months of 2012. The order book reveals that another 24.5 million DWT are scheduled to be delivered in the last five months of this year – and yet another 23.9 million DWT in 2013. BIMCO does not expect the entire orderbook to be built on time – historical data shows that only around 65-70 % of the scheduled orderbook is delivered at the end of the year according to plan. We expect that 15.5% of the Panamax fleet will be less than a year old at the end of 2012. This puts mounting pressure on owners to postpone deliveries or even better, to try cancellation of orders if possible. Keeping supply growth as low as possible will improve market conditions. The problem is illustrated quite clearly by earnings, which have plummeted to such an extent that the Baltic Panamax TCE average in the first six months of 2012 (USD 8,792 per day) approximates the six months following the dawn of the financial crisis in October 2008 (USD 8,663 per day).

The sliding demolition prices haven’t scared owners away. Demolition activity stayed firm just above 3 million DWT in the months of March-May, slowing down to just above 2 million DWT for the months of June and July. At the same time, we have seen demolition prices taking a nose-dive from USD 490 per LDT (tonne lightweight) in April to bottom out in June at USD 375 for bulker tonnage in Bangladesh. Prices have moved up a few inches since then.

Outlook:
Iron ore prices (62% Fe, CFR Qingdao port) fell to the lowest level since September/October 2011, striking USD 118 per tons at the end of July. In the meantime, prices had been around USD 135-150 per tons, but the weaker steel demand and slower activity level in the Chinese steel industry in recent months has caused prices to drop. Should steel mills or commodity traders decide to take advantage of this low level? Well, if they do so, it would be positive for Capesize demand in particular. But as shipping market sentiments and demand fundamentals today, are weaker than last autumn, chances are slim for a strong boost in shipping demand, coming from increased iron ore demand. 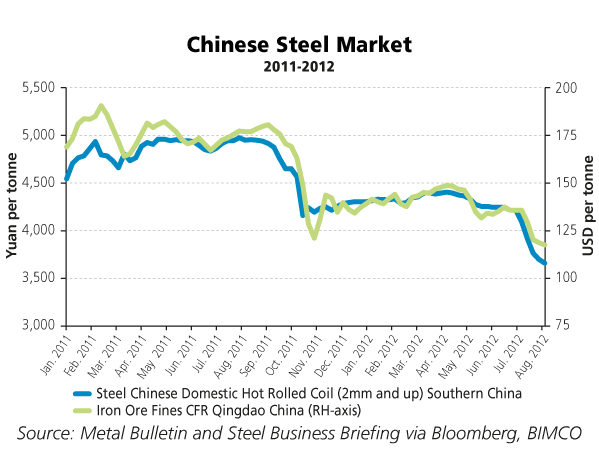 Turning our attention towards the upcoming harvest in the northern hemisphere, the US farmers are expecting a yield clearly below a satisfactory level. This means that US exports are less than likely to provide strong exports figures that would benefit shipping. Working in the same direction which is limiting the grain trade growth to 3-4% in 2012 is the strong short-haul export from Black Sea exporters (Russia and Ukraine). This leaves the upside to increased exports from the EU, in case of a strong harvest, riding on the back of sliding exports from Black Sea in the remainder of the year. The downside risk to the grain trade is likely to come from higher grain prices which we have already seen to some extent. Main importers of grains, (including corn and soybeans) are to be found in the Middle East, North Africa and Far East Asia.

To sum up our forecast for the coming 6 weeks as we move from the Summer lull into traditionally stronger months, BIMCO holds the view that oversupply probably remains too heavy for demand to make freight rates go much higher. The Capesize TC Average rates are expected to fluctuate at low levels around USD 3,000–8,000 per day. Panamax is expected a tad higher in the USD 5,000-9,000 per day interval. For the smaller segments, BIMCO forecasts that the Supramax freight rates are likely to remain on top in the USD 8,000-13,000 per day interval. Handysize rates, set to move sideways and less erratic, are likely to stay at the interval of USD 6,000-10,000 per day.

Contact online
BACK TO: Macro Economics - Without the political responsibility, will and decisiveness, the prospect for a recovery is bleak NEXT: Tanker Shipping - Low demand growth and an ever increasing fleet impact the market conditions negatively 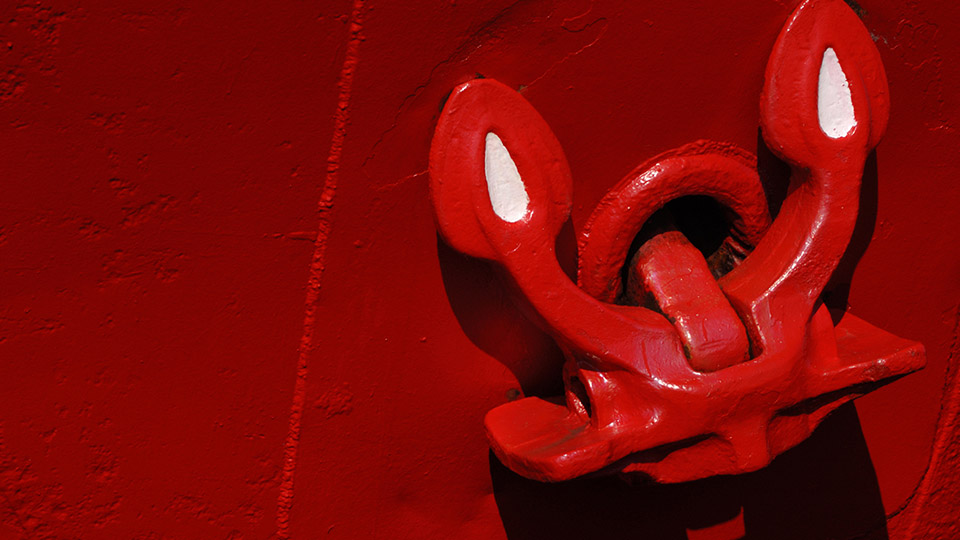