Macro Economics - Without the political responsibility, will and decisiveness, the prospect for a recovery is bleak

As we approach the fourth anniversary of the start of the global financial and economic crisis the outlook continues to be bleak. The V-shaped recovery is now ancient history and the sustainable growth level that we hoped would settle high continue to show a sideways or even descending trend.
Creating the framework for bringing back the world economy and consumer confidence onto a sustainable path is a political task – without the political responsibility, will and decisiveness, the prospect for a recovery is bleak.

Global economy:
As we approach the fourth anniversary of the start of the global financial and economic crisis the outlook continues to be bleak. The V-shaped recovery is now ancient history and the sustainable growth level that we hoped would settle high continue to show a sideways or even descending trend.

An already sluggish global recovery shows signs of further weakness, mainly due to continuing financial problems in Europe and slower-than-expected growth in emerging economies, the IMF said mid-July in a regular update to its World Economic Outlook. The severe situation is carved in stone by the negative growth forecast for Europe this year, with only low growth to follow next year. Although Greece must perform and continue to deal with their significant issues, it appears vital for Europe that Italy and Spain succeed in clawing their way back from the very deep hole. For that to happen both countries have to do what is needed to adjust competitiveness and improve their fiscal situation, but they cannot overcome the troubles without help and full commitment from the Euro countries.

So where is the good news to be found? The answer could be: “Everywhere, but in small doses”. Inflation is low almost across the globe and so are interest rates. It has never been cheaper to borrow money, at least for the banks. But borrowing money to boost entrepreneurship in shipping, for example, is not cheap nor is it readily available despite the expansionary monetary policies that have been implemented in most key economies.

More tangible positives are falling commodity prices as they lower input prices specifically and inflation in general. Among the major commodities, prices of crude oil stand out by declining the most in the second quarter – down to USD 86 per barrel, some 25% below their mid-March highs, due to the effects of weaker global growth prospects and alleviating concerns about Iran and subsequent geopolitical oil supply risks, while the constant above-quota production by OPEC members has supported a more downward price development.

US:
In the US, political issues are jeopardising the fragile growth, with delays in raising the Federal debt ceiling that could increase risks of financial market disruptions besides causing damage to consumer and business confidence. The poor growth level is barely enough to stimulate employment significantly, but the economy is at least still growing. 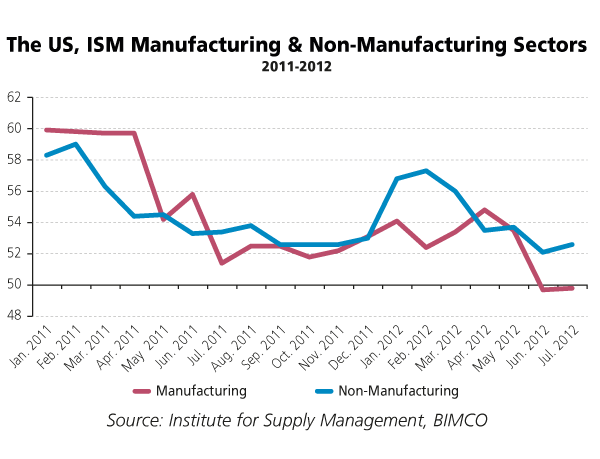 July numbers from the Institute of Supply Management (ISM) revealed a mixed painting of the current situation in the US, as economic activity in the non-manufacturing sector grew for the 31st consecutive month, while economic activity in the manufacturing sector entered the 2nd consecutive month of contraction. A reading above/below 50 indicates the sector is generally expanding/contracting.

Asia:
The world’s second largest economy, China, has become the most recent reluctant singer in the choir alongside most of nations in the developed world. China is posting weaker GDP growth figures, despite the fact that stimulus is applied to the economy constantly. As the official PMI is now at 50.1, it seems that even the larger public enterprises have little faith in a stronger growth in the near term. The reading of the HSBC/Markit PMI figure is positive, as it moves upwards, although it is signalling that growth is slowing down rather than speeding up. 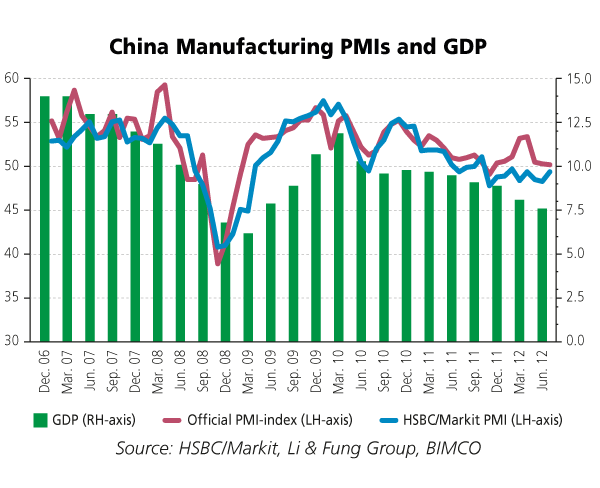 The battle to deliver beyond the 10% y-o-y growth rate in industrial production in China was lost for the fourth consecutive month in July, as the numbers ticked in at 9.2%. The weaker external economic environment amongst its main trading partners is hurtful to China, but also the slow growth in domestic demand in response to tighter policies and capacity constraints slows down growth rates.

Negative external impact is also slowing down India, where investments and credits are squeezed too. But it remains true that most developing and emerging market economies seem to be doing the right things to tackle this slowdown and are able to perform at high growth rates, also in very challenging times.

EU:
Unemployment in the Euro zone has just hit a new all-time-high at 11.2% for the 17 nations that enjoy the same currency. Spain, which is already struggling with high borrowing costs, claims an undesirable top spot with 24.8% of the nation’s workforce being unemployed.

Intense focus is also on the European Central Bank (ECB) and its Chief Mario Draghi, following his firm statement that the bank is “All In” and will do what it takes to save the Euro. Whether that means more bail outs or some countries leaving the zone remains to be seen. But such a statement is unfortunately likely to be tested by the financial market participants putting more pressure in the near future on the already weak banking system.

Outlook:
The weak economic growth in Q2 has prompted the IMF to reduce projected growth for 2012 and 2013 from its April forecast. Now the IMF expect global growth at 3.5% (adjusted -0.1%) and 3.9% (adjusted -0.2%) respectively. However, downside risks to this weaker global outlook continue to loom. According to the IMF, the most immediate risk is still that delayed or insufficient policy action will further escalate the Euro area crisis. The situation in certain crisis-hit Euro area countries will likely remain unstable until all policy action needed for a resolution of the crisis has been taken and this is also the way the market evaluates the situation. Additional downside risks relate to fiscal policy in other advanced economies, while the emerging economies are set to perform a soft landing.

The main risk in the short term relates to the possibility of excessive fiscal tightening in the US, given the recent political gridlock. In the event US politicians fail to reach an agreement on extending some temporary tax cuts and reversing deep automatic spending cuts, the US structural fiscal deficit could decline by more than 4 percentage points of GDP in 2013. The US growth would then stall in 2013. Also, the situation in China needs to be followed closely because of the huge impact on shipping in basically all segments.

Another risk arising for the medium-term stems from insufficient progress in developing credible plans for fiscal consolidation in the US and Japan – the search for safe havens in global bond markets currently mitigates this risk. In the absence of policy action, medium-term public debt ratios would continue to move along unsustainable trajectories.

All the economies of the world are interconnected to a large extent, resulting in significant spill-over effects from any positive or negative economic or political development. The political will to create the background for future growth needs to be established and the sooner the better, to bring world economy and thus shipping back on a sustainable growth track going forward.

Many questions are up in the air at present: How quickly can India return to real positive growth? Will Brazil continue the positive development? And how about the development in fuel prices? Lower oil prices are supportive for global growth, even though countries heavily depending on income from oil, like Russia, will probably have a hard time.

The situation is rather uncertain, but some elements can swing around and give some positive momentum. The following analysis of the main segments is based on this uncertain situation and will be impacted by any positive change to the current situation.

Contact online
BACK TO: Container Shipping - Freight rates hold on to a healthy level on the main routes NEXT: Dry Bulk Shipping - Handling the supply side challenge remains top of the agenda