The positive stories continue to show themselves in the container shipping segment, with freight rates holding up well and demolition activity staying strong. In the light of the slowly developing demand side, it’s very positive that the industry deals with the supply side issues to improve the fundamentals.
Freight rates hold on to a healthy level on the main routes, while new large vessels are put to work smoothly without adding extra downside pressure to the current balance.

Demand:
The positive stories continue to show themselves in the container shipping segment, with freight rates holding up well and demolition activity staying strong. In the light of the slowly developing demand side, it’s very positive that the industry deals with the supply side issues to improve the fundamentals.

Growth rates in container volumes on the main trading lanes pose a continuous challenge as they struggle to improve. On Far East to US West Coast the first half year growth number for loaded inbound boxes is just 2.1%. Not impressive, but moving upwards as compared to the development seen one year ago, where imports fell from May till December. As regards overall traffic on Far East to Europe, volumes are down by as much as 2.1% in the first six months, mirroring the difficult economic situation that is felt across Europe.

On the high volume/short haul trading lanes, intra-Asia freight rates have fared much more stably as compared to the very volatile rates development on the main long haul trading lanes to Europe, Mediterranean (Med.) and US West Coast (USWC). This improved the comprehensive index as is clear from the graph below; the index is heavy on the long haul (50% originates from Europe/Med./USWC), while the four depicted intra-Asia routes comprise only 15% of the index. 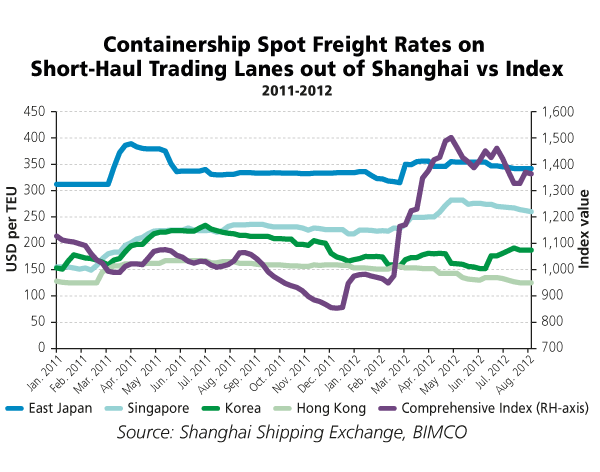 Asset values amongst the very large vessels within the containership segment have been moving relatively more slowly downwards. Compared with the asset prices in the smaller segments, which fluctuate more (Vesselsvalue.com). Following the general drop in values in 2009, they rose and reached almost the pre-crisis levels during the peak season of 2010. Following a new setback in values around the turn of the year 2010/2011, asset values recovered somewhat in Q1 and Q2 of 2011, but since then have slid to a level close to a four-year low. An exception moving in the opposite direction is the small feeders carrying 750 TEUs. They are valued at around 7% higher today than 8 months ago.

Overall containership values have held up just a little stronger in 2012, falling only 5-10% in value as compared to tankers and in particular, dry bulk asset prices, which have eroded by 8.5% (Suezmax Tanker) to 25.9% (Panamax Bulker) since 1 January 2012. Despite some improvements in the values in recent weeks, BIMCO expects asset values to soften as the macro economic climate improvement is delayed. Weighing towards a more positive development will be a stronger than expected performance of freight rates. 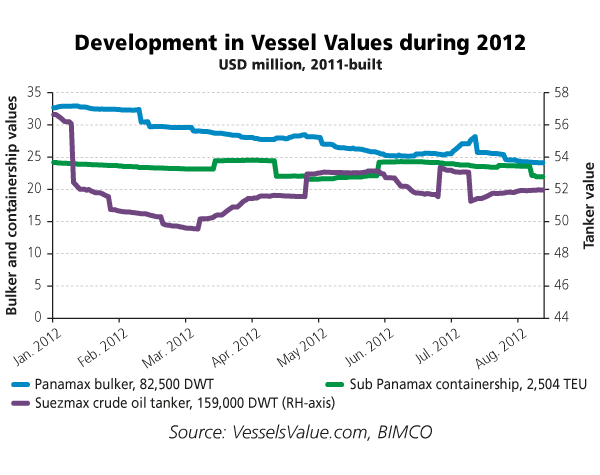 Supply:
The containership fleet has just surpassed the 16 million TEU mark, with 3.6 million TEU left on the orderbook for future delivery. But the growth is luckily diminished due to excessive demolition activity, in particular in the smaller segments. 90 vessels of an average size equal to 1,866 TEU have neutralised the inflow of 167,947 TEU. BIMCO has updated the demolition forecast in line with elevated monthly activity in the rest of the year considerably above the 5-year average, to an estimated 250,000 TEU. In combination with a delivery pace which is expected to slow down in coming 5 months, the forecast fleet growth is lowered to 7.2% in 2012. 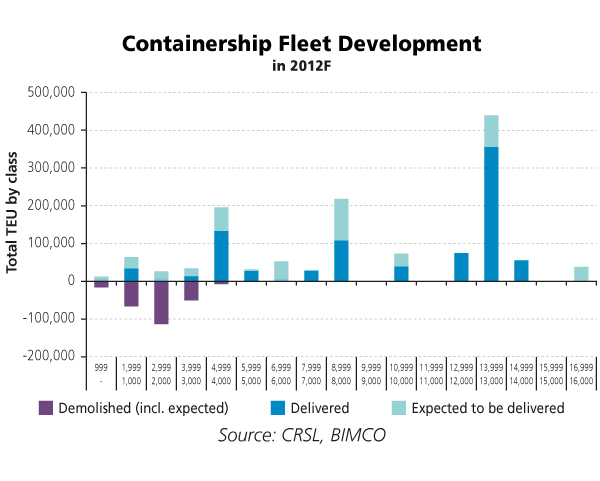 The sum of new orders placed during 2012 has doubled in recent months. The predicted lowering of newbuilding prices has resulted in a surge in newbuilding orders placed at Asian shipyard. This is illustrated most significantly by the order for a full string of 10 vessels, each with a capacity of 13,800 TEU, at a reportedly record low price of USD 114 million each. The price is down by 11% from one year ago. Before the crisis, the price-tag for vessels able to carry 13,500 TEU was around USD 160 million. Before news about that order broke, only 28 container ship orders in the range of 1,100 to 5,000 TEU were signed during the first half of 2012.

Of the 896,678 TEU delivered in 2012, we have seen 41 Ultra Large Containerships (ULCS) with a capacity to carry 10,000 TEU or more, accounting for 59% of the fleet growth. With just 15 ULCS scheduled for delivery in the coming five months, the delivery and subsequent deployment of mega-size vessels into active service has only had a moderate impact on the market if you judge this from observing freight rate development. 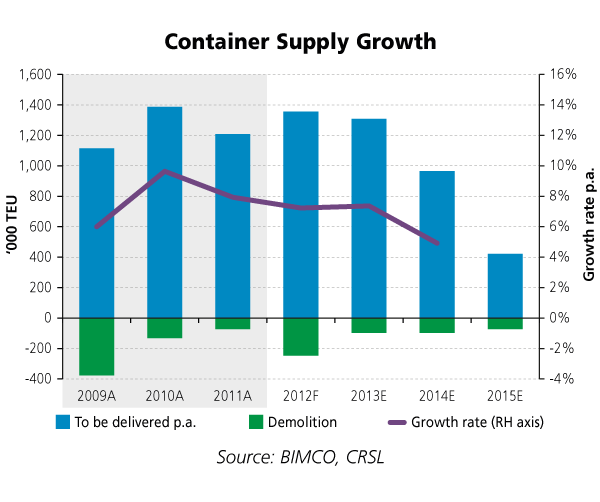 Outlook:
Regardless of the slow development of demand, freight rates have travelled from a very poor state at the end of 2011 to a comfortable level on several significant trading lanes. Bearing that in mind, BIMCO expects the peak season to become a positive surprise, with rates holding up somewhat but potentially with a sliding tendency if deployed capacity reveals itself as abundant. BIMCO continues to expect the short term focus will be on balancing the demand for new tonnage with deployed capacity. Our forecast contains an improved market balance, as the supply side is helped by strong volumes of demolished tonnage which is removing significant number of smaller vessels up to 3,000 TEU.

Going into the traditional peak season where Christmas presents are sent from the producers to the retailers, all eyes are on freight rates. As box volumes have been only slowly increasing – if  they have increased at all – the number of idle ships has come down significantly. The question that remains to be answered is: Will demand be strong enough to match deployed capacity? Or will the prediction of the forward curves (GFIgroup.co.uk) prevail, with rates set to fall as much as 17.5% or FE-Europe and 23% or FE-USWC?

Hopefully, container shipping demand will pick up sooner rather than later, even though demand in Europe is weak and results in tougher times ahead for the container shipping industry on that trading lane as well as the Asian manufacturing sectors. Meanwhile, the peak season is well underway on the Pacific. Strong July import figures give reason to believe that August could be strong too and support a continued positive trend in the USWC freight rates.

Contact online
BACK TO: Container Shipping - Volume growth is keeping up the optimism, even though the recent hefty reactivation of idle tonnage puts a cap on high flying freight rates. NEXT: Macro Economics - Without the political responsibility, will and decisiveness, the prospect for a recovery is bleak