Tanker Shipping - Tight supply delivers rate spike in Suezmax, MRs hope for a busy Summer on the Atlantic as the US driving season kicks in (while VLCCs struggle in a really tough market)

The demand picture for oil tankers is steady – perhaps a bit too steady if you look at the freight rate movements for VLCC crude oil tankers and MR clean product tankers. This stands in contrast to the spikes that Suezmax owners have achieved during the first five months of 2012.
Listen to podcast of this article

The demand picture for oil tankers is steady – perhaps a bit too steady if you look at the freight rate movements for VLCC crude oil tankers and MR clean product tankers. This stands in contrast to the spikes that Suezmax owners have achieved during the first five months of 2012. Average daily earnings in the Suezmax segment has been double that of VLCC daily earnings at USD 20,125 per day as compared to VLCC earnings at USD 9,102 per day. Even though China, the world's second biggest energy consumer, imported a record 6 million barrels per day of crude oil in May, up 18.2% from a year ago, it is a tough market. If this peak figure stems from the building of inventory it could affect imports in coming months. The Suezmax peak rates come rather surprisingly at times when US East Coast imports tumble as the refineries that require sweet crude oil from West Africa and the North Sea are about to either terminate production or yet to restart following a sale to new owners, as has been the case for several of the closure-threatened East Coast refineries. That indicates that a tight supply of tonnage may be the most important factor around to provide rates spikes in today’s tanker market. 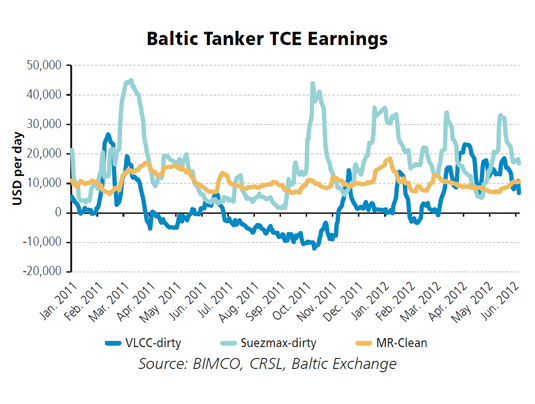 A quick glance at the Time Charter Equivalent (TCE) Earnings for the clean tanker workhorse MR discloses some positive feedback from the start of the US driving season. Traditionally, the lead up to the start of that season is the strongest one in terms of imports and corresponding earnings. This trend has to some extend proven itself once again this year. During May, freight rates moved from USD 7,000 per day to USD 12,000 per day, but gasoline imports levels according to EIA have only just touched the 800,000 barrels per day barrier during the last week of May and first week of June. This is a level that is more than 300,000 barrels per day shy of last year’s import level at the same period of time. The EIA figures disclose that US domestic production of motor gasoline has followed the same trend this year as the last – leaving room for optimism for gasoline imports to move up significantly should the arbitrage-trading of EU-to-US gasoline open up. The recent drop in US prices of gasoline has limited this opportunity for now, even though demand is on a par with last year and US gasoline stocks are low.

The import level of gasoline to the US from Europe is quite nicely mirrored in earnings, with a couple of weeks’ lag corresponding to the time from when the fixture takes place to the time of landing the cargo. 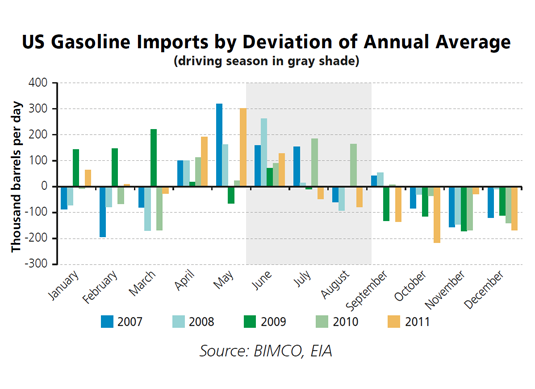 The product tanker fleet is seeing limited inflow of new tonnage nowadays as compared to recent years of high supply growth. The low level of new deliveries into the Handysize segments is actually being outpaced by tonnage be sold for demolition. During the past 14 months, 1.1 million DWT has left the fleet, sold for demolition. In the same period of time only 0.5 million DWT has entered the fleet – resulting in a very positive shrinkage of the fleet in that segment. This is in opposition to the changes to the MR fleet, where demolition has been 0.8 million DWT and inflow at 2.1 million DWT. LR2 is the same story as MR, with 28 new vessels being delivered during the past 14 months, but LR2 has a much smaller orderbook left for future delivery; just 24 new LR2 or 10% of the current fleet is on order. For MR product tankers, another 18% is expected to be added to the current fleet in the coming years, according to the current orderbook.

The active total crude tanker fleet has grown by 1.9%, as 12.5 million DWT has been delivered into a fleet totalling at 364.2 million DWT five months ago. Countering that inflow is 5.6 million DWT which has left the fleet during the same time due to demolitions etc. New crude tanker orders in recent months have been completely absent except for three VLCCs due for delivery in 2014 and 2015.

The active product tanker fleet has grown less fast at just 1.2% so far in 2012, as 29 vessels equal to 2.1 million DWT have been delivered, offset by 0.8 million DWT being demolished (13 vessels). New contracts for product tankers have made a small jump forward, as no less than 17 new orders have been placed, adding to the 26 in the previous three months. Ten of the new orders were for MR tonnage. 72% of all new product tanker orders have been in the MR segment in 2012. This continues the trend from 2011 where 80% were MR-orders. 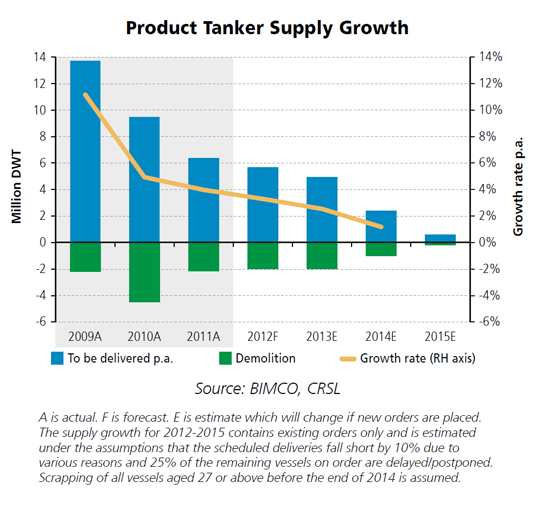 On the horizon for shorter term rate-improving exogenous events is the US driving season that runs from Memorial Day (28 May) until Labour Day (3 September) and the hurricane season which officially kicked off 1 June and runs all the way though to end-November.

As American gasoline consumption is peaking during the coming months, it is important to notice a few bullish factors that might impact product tanker freight rates positively. The current US gasoline stocks are at the bottom of 5-year-range at 200 million barrels; those figures are likely to spur higher internal production (which has already happened) and hopefully, also higher imports (which has not happened yet).

In the US Gulf in particular, we are about to scout for hurricanes to disrupt the US oil supply; hurricanes a bit more hefty than the tropical storm “Beryl” which only cancelled a few Memorial Day celebrations but failed to disrupt and positively impact the tanker market. The season is running all the way through to the end of November, with a less active season as compared to recent years, according to the outlook from NOAA Climate Prediction Center. This forecast translates into 1-3 major hurricanes with top winds speeds of 111 mph or higher, ranking category 3 (Karl in 2010), 4 and 5 (Katrina in 2005).

Going into Summer in the Northern Hemisphere, BIMCO expects that freight rates in the crude oil segments will move a bit erratically, but more or less sideways. For VLCCs, that translates into USD 10,000-20,000 per day. The Suezmax segment could provide some spikes, as seen in the past five months, but is expected to hover around at USD 15,000-25,000 per day. Aframax vessels have recently seen rates improve a bit as the pressure from the high Brent oil prices eased and are expected stay stronger in coming months in the range of USD 8,000-14,000 per day.

Short-term factors that may affect our rate forecast on the upside or downside are primarily to be found at the macro level. As we have seen, a little less positive economic development in recent months dampened oil prices, subsequently also demand, as consumers remain hesitant to increase consumption on a large scale.

Handysize and MR clean rates should be supported by stronger gasoline demand from the US to support freight rates move around USD 8,000-13,000 per day. Earnings on benchmark routes for LR1 and LR2 from AG going East continues to hold limited potential for impressive rate moves, and BIMCO expects freight rates to stay flat around between USD 1,500-8,000 per day.

Contact online
BACK TO: Macro Economics - Recent die-hard optimism is being shadowed by dark clouds partly created by political problems. Key figures are falling short of expectations, but the direction is alright NEXT: Container Shipping - Volume growth is keeping up the optimism, even though the recent hefty reactivation of idle tonnage puts a cap on high flying freight rates.