Macro Economics - Recent die-hard optimism is being shadowed by dark clouds partly created by political problems. Key figures are falling short of expectations, but the direction is alright

The recent optimism has fortunately not completely evaporated following the latest series of less positive economic indicators from across the globe, including India, the US, Brazil and Spain. The EU debt situation creates a lot of uncertainty, not only as regards economic development but also regarding the political situation on both sides of the Atlantic Basin.
Listen to podcast of this article

The recent optimism has fortunately not completely evaporated following the latest series of less positive economic indicators from across the globe, including India, the US, Brazil and Spain. The EU debt situation creates a lot of uncertainty, not only as regards economic development but also regarding the political situation on both sides of the Atlantic Basin. On the other side of the scales have been positive surprises from Japan and Australia, making the overall picture a bit blurred and the direction of the global economy undecided.

Firm action from China is expected to be just around the corner. China is about to boost the economy more actively than the “passive” means taken in the past 4-6 months. Increased lending and approval of a significant number of infrastructure projects valued at about half the size of the November 2008 stimulus package is to be expected from Beijing. This kind of stimulus is likely to support growth in the short to medium term.

Crude oil is a commodity whose price is affected by the sum of all fears (and prospects) for the global economic course and it has lost lots of ground during May. On 4 June, Brent crude prices fell below USD 96 a barrel to a 16-month low, pressured by fears of a global economic slowdown following weaker than expected economic data from the world’s largest oil consumer, the US. Meanwhile, in China, the picture is more mixed with strong commodity import figures in a combination with a slower GDP growth.

The relatively high oil prices are not helping to bring the recovery around anytime soon. Oil prices at this level are a barrier to economic growth. The recent drop helps only a little, in shipping terms a ton of bunker fuel is still priced at USD 560. Coming down from USD 700 is positive, but oil still remains much more costly that the fundamental supply and demand balance would imply.

The US GDP growth slowed from 3.0% in Q4-2011 to 1.9% in Q1-2012 y-o-y. For the full year IMF expects the US to grow by 2.1% – up from 1.7% in 2011. The current US unemployment rate at 8.1% is the lowest since February 2009. More jobs are created almost every day, but the pace is much too low to bring back full employment any time soon. The on-going recovery is a very slow one, reflecting the multiple challenges all over the world and the negative spill-over effect from one giant economic area to the next.

The Conference Board Consumer Confidence Index declined slightly in May following a minor fall in April; nevertheless numbers are still high in a post-financial crisis perspective. The index suggests that the US economic growth will presumably be moderate the next few weeks.

The construction of new houses in the US, which has been very low in recent years, showed signs of life in the early parts of 2012 as the mild Winter advanced several construction projects, pushing also to improve the employment data.

Recent figures from Japan proved strong, as the economy grew by 1.1% over the previous quarter. Private consumption increased for the 4th quarter in a row, but more importantly government investments also rose in the first quarter. The latter trend illustrates that the post-quake clean-up has now been completed in some places, as the building of new infrastructure is taking place on a larger scale.

Chinese industrial production was raised by just 9.3% y-o-y in April, which is the lowest level in 35 months, while May figures rebounded somewhat to come in at 9.6%. This indicates that the global macroeconomic realities are biting China more than before. As the industrial sector represents more than 40% of the Chinese economy, it is vital that the slowing trend is reversed.

It is vital that expansionary fiscal and monetary stimuli are used to counter this slow down and secure a soft landing that will benefit not just China but also the global economy. Several months of attempts to re-ignite growth by “passive” means haven’t done enough, so it’s now time to apply more “active” means of stimuli, as seen just recently with many new activities starting up in China.

The stimuli will be most welcome, as in early June, HSBC/Markit reported a seventh successive month-on-month decline in the overall new manufacturing business, leading to higher unemployment and overall poorer operating conditions. The HSBC/Markit China Manufacturing PMI stayed in contraction below 50, where it has been since November last year. This index is more heavily loaded with smaller private enterprises than the “official PMI” from CFLP. The CFLP index just dipped its toes into contraction in November but left it just as quickly, to produce increasing numbers until now. The official May figure dropped markedly from 53.3 in April to 50.4 in May. Ten of the 11 sub-indices fell – the only one to post a higher index level as compared to last month was the “stocks of finished goods” that were sadly expanding.

In India GDP growth eased in Q1-2012 primarily due to a weak manufacturing sector performance. GDP growth came in at 5.3%. This 10-year-low figure compares to 7.8% growth in the same period last year and digs deeper than the 5.8% recorded in Q1-2009 in the wake of the current crisis. The Reserve Bank of India lowered the interest rate to 8.0% on 17 April to seek monetary stability on the back of an inflation rate that seems under control currently at 7.23%. According to the IMF, growth in India should land around 6.9% in 2012, representing a dip from 7.2% in 2011 before renewed economic speed in 2013 at an increased 7.3%.

There is still a long way to go for the European Union. While the IMF updated its expectations to the European Union GDP growth to 0.03% in April up from -0.1% in January, the region is still struggling hard. Government austerity and retrenchment in the most vulnerable Eurozone economies are crucial to staying afloat. Recent flash figures from Markit further enhance the critical condition of the European economy. Markit reports that the May Eurozone Manufacturing PMI fell to a 35-month low of 45.1 down from 45.9 in April.

The muddy political landscape in Greece has raised the stakes in the on-going Greek tragedy. Will the new election on 17 June bring around a government that will reject the deal done with its lenders, or will the new government stand by the current deal – perhaps with some amendments, remains the big question. Note that Greece is fully funded (outside the international market) in coming years if they reaffirm the deal they have with IMF/EU/ECB. 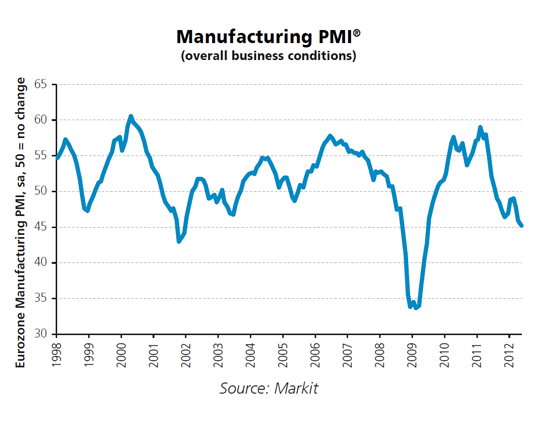 As we await the Greek referendum, focus is now on the very serious situation in Spain with a banking sector on the ropes as well as the worries that show themselves in Italy. One question remains – will the necessary funds be available to bail them all out?

Strong political will, in particular but not exclusively in Europe, will be needed in spades. The challenges are still clear and present before the world’s economies can enjoy a sustainable recovery with solid growth going forward.

The increased focus on sanctions such as those against Iran is putting greater pressure on shipping companies. Despite being a familiar challenge for the industry, the magnitude and complexity of the sanctions has increased over time and is likely to continue down that road. The breach of a sanction may have serious consequences to a shipping company and its future business. On 1 July, the EU sanctions on Iran will become fully effective, including an oil embargo. The EU and the US sanctions together are something that shipping companies must be fully aware of to avoid the potential pitfalls of breach of sanctions when doing business. It should be noted that the Iran sanctions are just one of many e.g. Syria. Politically, the situation has recently become more complex as the US has exempted 7 nations for six months from its Iran sanctions, including India and South Korea; this is adding further uncertainty to the market.

JPMorgan Global Manufacturing & Services PMI data from May indicates that the world is entering a phase of softer growth during mid-year. The manufacturing sector posted the slowest output growth in five months, while the service sector was able to hold up activity comparably well. Businesses are responding to slower growth in demand by moderating the rate of net hiring, according to JPMorgan/Markit.

The uncertainty that keeps the recovery from taking off is also hampering shipping demand. The blurred situation, with a toxic mix of little or no trust in certain nation’s ability to pay their dues and high unemployment, is the main culprit. Once that is dealt with, everyone can focus more on the future potentials for growth rather than haggling over a smaller and smaller piece of the pie.

Contact online
BACK TO: Dry Bulk Shipping - The haunted dry bulk sector awaits positive demand impact from China and is beaten by supply growth in record territory. NEXT: Tanker Shipping - Tight supply delivers rate spike in Suezmax, MRs hope for a busy Summer on the Atlantic as the US driving season kicks in (while VLCCs struggle in a really tough market)