The dry bulk market is under immense pressure, as the retreating weight of China as the driver of the market is extensively felt. At a time when supply growth simply breaks new mind-blowing delivery records, the demand situation is pitching in a bit too. Currently, there are reports of Chinese customers in the steel industry that are refusing to honour their contract as prices drop, and stock piles are fuller than normal at a time when steel mills take their foot off the throttle following a red-hot production period in recent months.
Listen to podcast of this article

The dry bulk market is under immense pressure, as the retreating weight of China as the driver of the market is extensively felt. At a time when supply growth simply breaks new mind-blowing delivery records, the demand situation is pitching in a bit too. Currently, there are reports of Chinese customers in the steel industry that are refusing to honour their contract as prices drop, and stock piles are fuller than normal at a time when steel mills take their foot off the throttle following a red-hot production period in recent months. Current fundamental demand/consumption is not strong enough to support such a high production level. As the world awaits the next anticipated Chinese stimulus package to lift demand, the dry bulk market is scouting for another saviour to get it through the day. 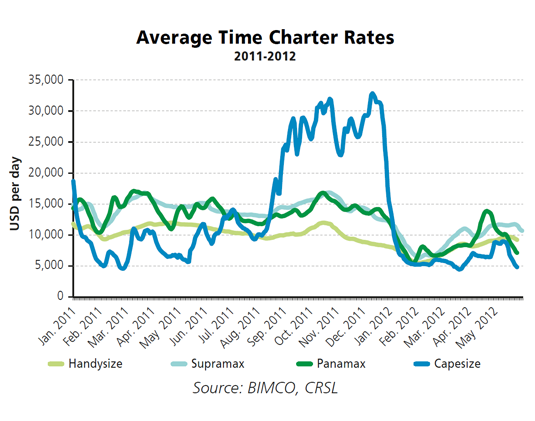 Crude steel production in China surpassed 60 million tons a month in both March and April. The monthly average in 2011 was 57 million per month.

The first five months average earnings of a Capesize bulker ended at USD 7,013 per day. This is down by 13% as compared to the same period last year that earned USD 8,060 per day. The time charter average has only been above USD 10,000 per day in the first 11 days of the year. The brief strengthening of freight rates in the midst of May unfortunately proved to be short-lived.

As suggested two months ago, the downward overshooting of rates was corrected upwards with stronger rates during April and the first half of May, but as the optimism in the macroeconomic picture also began to fade, so did the freight market. 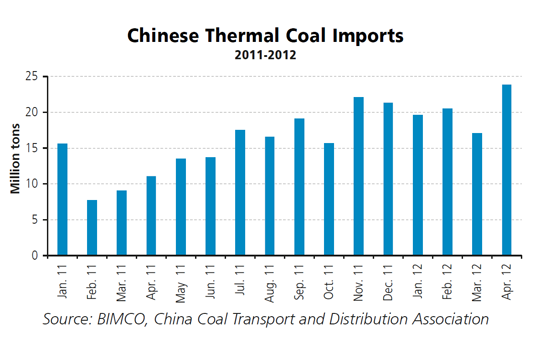 China imports more coal when the price gap between Chinese thermal coal (less a heat discount) and imported thermal coal is providing an arbitrage opportunity (including freight costs). When e.g. Australian or Indonesian coal prices become relatively cheaper, Chinese buyers are interested in importing more coal from Australia, which is good news for ship owners. In 2011 the price gap widened substantially, leading to hitherto unseen levels of thermal coal imports to China. If the price of Australian and Indonesian coal drops below the price of Chinese coal, as has been the case the last few months, we might see Chinese imports get back strongly when coal demand peaks in July. This could make 2012 imports surpass those record volumes of 2011.

Following the largest single months of newbuilt deliveries ever in January 2012, the pace of deliveries has fortunately slowed down closer to 2011 levels. During the past year, deliveries of Handysize vessels have accounted for roughly 10% of added capacity. This stability is mirrored across the dry bulk segment over the past year. However, most recently we have seen some fluctuations in Capesize capacity added to the fleet, increasing from 41% in January to 54% in April. 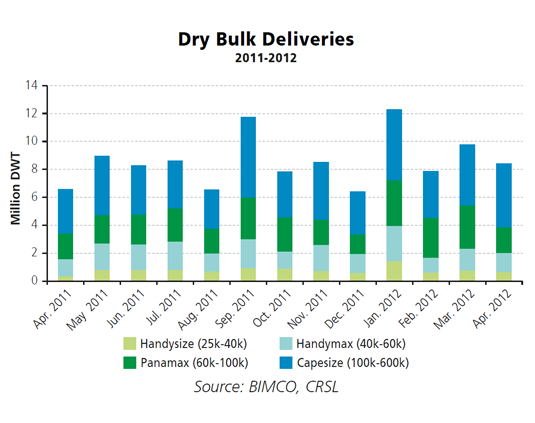 The inflow of newbuilt dry bulk remained larger than expected during April and May, continuing the frantic delivery pace of Q1. During the first 5 months, as much as 47 million DWT set a new World Record, beating the old one from 2011. The frantic pace has put 2012 on course to possibly surpass the 2011 total delivery of 98 million DWT.

The frantic pace is a result of lower than expected delay and slippage. As this new trend appears to be sticky, it has been taken into account and subsequently lifted our delivery estimates for 2012 to 105 million DWT.

So far, the active fleet has grown by 5.4% in 2012 as 127 Handysizes, 140 Handymaxes, 162 Panamaxes and 115 Capesize vessels were delivered. Weighing against this massive inflow is strong demolition pace which has accounted for the removal of 13.5 million DWT so far. Recently, demolition prices have decreased somewhat. This may result in a slower demolition pace going forward.

In the previous SMO&O two months ago we provided short-term projections that the Handysize newbuilding prices could be heading further South before firming a bit again. Our estimates were for 32 k-35 k to hit USD 20 million. During May, orders for six 39.5 k Handysize vessels were signed at USD 22.3 million apiece. The vessels were even reported to be highly sophisticated, fuel efficient and built in China.

The above-mentioned Handysize orders were amongst the 113 dry bulk orders in total placed during the first five months. This slowdown in ordering is surely a sign of very poor market conditions and a souring of future prospects as the oversupply simply gets worse by the day, as can be seen from the bullish delivery pace. During the first five months of 2011, 253 orders were placed; this translated into an ordering slowdown of 55% in 2012. 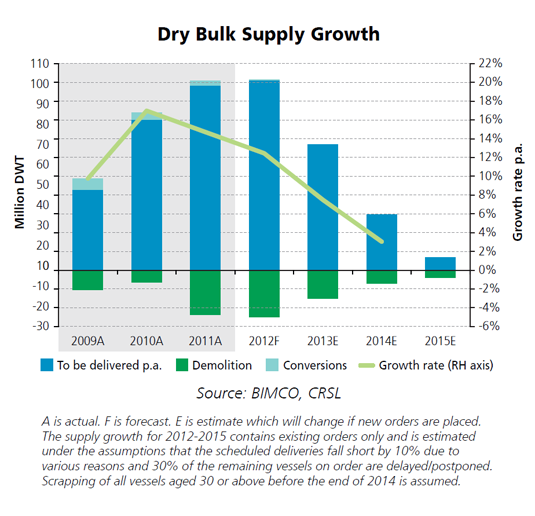 The demolition market sentiment is weak right now across the board of the four main breaker nations of Bangladesh, Pakistan, India and China. As May went by, a combination of factors such as falling steel prices, a historically low Indian Rupee against the US Dollar and pretty full scrap yards following the buying spree in first four months, resulted in a quick lowering of the demolition price (USD/ldt) offers from buyers to the tune of 10% over a couple of months. This development has prompted several owners to withdraw scrap candidates from the market as they became unimpressed by the offered rates. At the end of May USD 435/ldt was offered for General cargo and USD 455/ldt for tankers. The Indian Rupee was trading at 56.09 to the US Dollar at the end of May, compared with 52.64 a month earlier.

In spite of the weak sentiment in the demolition market that is likely to slow down activity in the coming months, BIMCO is adjusting its demolition outlook slightly up from 20 million DWT for 2012 as a whole to 25 million DWT. This adjusted outlook comes on the back of an extended poor freight market, a market that appears hard to escape.

Where are we heading in terms of freight rates? China is partly “failing to deliver” on raw material imports that can affect the market balance. Volumes are strong, but growth is slow and easily outpaced by supply growth.

While the recent downturn has been hardest on the Panamax and Capesize segments, the smaller vessel sizes are unlikely to stay immune as the market tumbles. To sum up our forecast for the coming 6 weeks, BIMCO holds the view that the Capesize Time Charter Average rates will remain at depressed levels but move slowly up from current very low levels but are not expected to exceed USD 10,000 per day. Panamax is expected to stay in the USD 5,000-9,000 per day interval. For the smaller segments, BIMCO forecasts that the Supramax freight rates are likely to stay at the USD 8,000-13,000 per day interval. Handysize rates, moving sideways and less erratic, are set to stay at the interval of USD 8,000-11,000 per day.

Contact online
BACK TO: The average age of demolished crude oil tankers hits 21 – not much room left for demolition balancing the market! NEXT: Macro Economics - Recent die-hard optimism is being shadowed by dark clouds partly created by political problems. Key figures are falling short of expectations, but the direction is alright