Container Shipping - Volume growth is keeping up the optimism, even though the recent hefty reactivation of idle tonnage puts a cap on high flying freight rates.

The first five months of 2012 have been developing in the right direction for the container shipping industry. Freight rates on the main routes have been going up markedly and consecutively in March, April, May and June, despite happening at a decreasing amount – the total hikes amount to USD 1,100-1,300 per TEU. This has lifted freight rates on the Far East to Europe trading lane from USD 536 per TEU just before Christmas to the current level of USD 1,634 per TEU, equal to +205%.
Listen to podcast of this article

The first five months of 2012 have been developing in the right direction for the container shipping industry. Freight rates on the main routes have been going up markedly and consecutively in March, April, May and June, despite happening at a decreasing amount – the total hikes amount to USD 1,100-1,300 per TEU. This has lifted freight rates on the Far East to Europe trading lane from USD 536 per TEU just before Christmas to the current level of USD 1,634 per TEU, equal to +205%. On the trans-Pacific main trading lane, rates have been lifted more moderately from USD 1,424 per FEU before Christmas to USD 2,658 per FEU, equal to 87%. To complete the picture, it must be said that the trans-Pacific did not experience such a heavy drop in rates as carriers were faced on the Far East to Europe trading lane.

Moving away from the main lanes and based on the spot prices as quoted by the Shanghai Shipping Exchange, rates have also risen up to 10% on the “minor” trading lanes that take care of Chinese exports.

Putting the current freight rate level into perspective, we are now back at where the industry was some 21 months ago in September 2010 – after spending large parts of the meantime at unsustainable freight rates levels.

Container volumes on the Far East to Europe trading lane grew by 5% in the first quarter – which is just a tad below the BIMCO expectation of 6% for the overall demand growth for the container shipping sector. Meanwhile, on the US West Coast, volume growth has been slow in the first quarter, at just 0.4% as compared to the same period last year. The poor accumulated growth is mainly due to a very weak February, where growth in loaded inbound containers dropped by 12.5% y-o-y. By excluding February and taking only January, March and April into account, the growth figure settles at 5.2%. 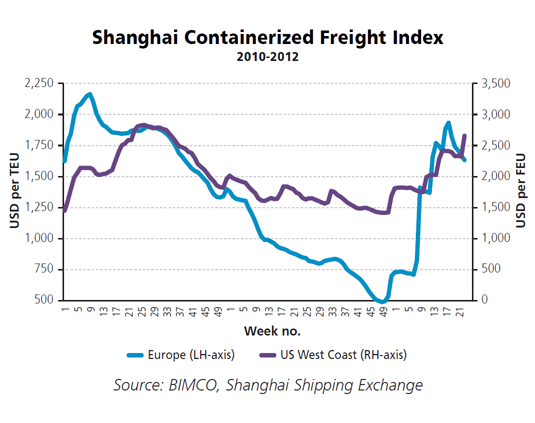 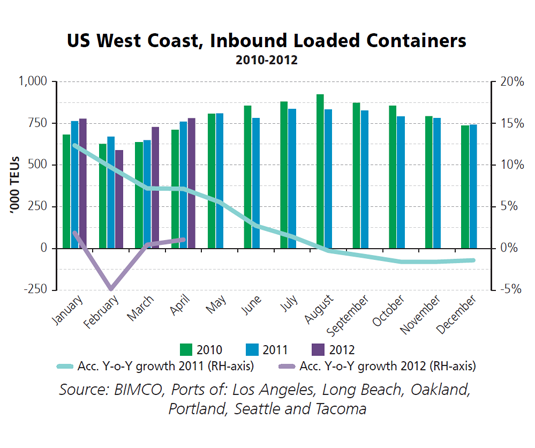 While the front haul trading is taking the headlines, the export and import figures are proving that the balance on the main shipping lanes is getting tighter. As the Western importers are lowering the growth rates of imports as a response to weak consumer demand, the main production nations are asking for more containers to go the other way. A higher living standard in e.g. China is the reasoning behind this.

When rates go up, the idle fleet tends to come down, as shipping companies seek to strike the perfect balance between holding up rates and adding just as much capacity as they need in the market place. Since the middle of March, the idle fleet has dropped by 47% from just above 900,000 TEU to around 480,000 TEU today. As long as rates hold up well and slide only marginally, the idle fleet should continue to drop, as owners make services ready ahead of the peak season in August.

The stronger than expected demolition activity in the container shipping industry has been a positive surprise. Owners have taken advantage of the high scrap prices and cleared out the less competitive or over-aged vessels from the active fleet. In total, 109,200 TEU have been demolished over five months; this bodes well for the remainder of the year. Still, the size of these vessels is relatively small, as they range from 60 TEU to 3,604 TEU at an average age of 25 years.

During the first five months of 2012, 88 new containerships of 654,000 TEU have joined the active fleet, while 60 ships have left for demolition. This made the active fleet grow by 3.6% so far in 2012. The largest vessels to enter the fleet were the China Shipping Group twins CSCL Neptune and CSCL Uranus, both ships that were built in South Korea are able to carry 14,074 TEU and were ordered back in 2007 at USD 169 million apiece. Putting the discrepancy of the fleet growth into perspective, the largest vessels that left the fleet were three 20 year old vessels from Yang Ming able to carry 3,604 TEU.

The total inflow of tonnage into active service during 2012 is a combination of reactivated vessels and the newly delivered ones, and excluding the demolished vessels. Breaking that into two parts, the active fleet supply actually contracted from the start of the year until mid-March, as the idle fleet grew faster than newly built deliveries. This made room for freight rates to increase. Since then, supply growth has been correspondingly steep, as the inflow has been tightly balanced in order to get as much tonnage back into active service while conserving the market balance. 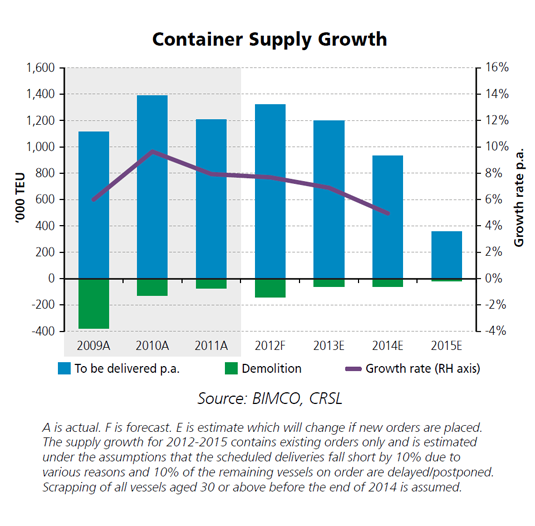 The overall containership supply is developing as projected. BIMCO has upwardly adjusted the demolition quantum for the full year following the rush to the breakers in the first five months of the year; a rush that could tail off a bit, as demolition prices have decreased recently.

The signing of new contracts remains extraordinarily low. BIMCO expects this to change, as yards offer increasingly cheaper slots to fill their orderbooks and to counter the drop of 16% on containership orders this year alone. Despite the overcapacity in the market, low newbuilding prices may tempt owners looking to renew their fleets and replace older tonnage with new designs and fuel-efficient ships.

The third quarter peak season will soon be upon us, and carriers are expected to upgrade their services during June to cater for customers and the increasing volume that is expected during July, August and September. However, BIMCO expects that the focus will be on preserving freight rates and limiting the expected weekly decreases in freight rates in the coming weeks. BIMCO expects the short term focus to be on balancing the demand for new tonnage with deployed capacity.

Depending on the individual carriers’ expectations for when demand is going to peak in coming months, they are likely to position themselves accordingly by adding extra tonnage to the services. Should the demand peak turn up earlier than expected, rates will go up; and vice versa if the peak season appears to be “back-end loaded”. Let’s hope we are heading for a great Christmas – even though the growth perspective in US and EU do not look that great at the moment.

Following the positive development of freight rates in March, April, May and June, attention will be on the success of implementing peak-season surcharges (PSS). Some of the announced PSS have already been postponed – alongside the failed 1 June rate surge on Far East to Europe. It remains vital that utilisation of deployed capacity is high, as it will be the key to push through any rate hikes going into the third quarter.

Contact online
BACK TO: Tanker Shipping - Tight supply delivers rate spike in Suezmax, MRs hope for a busy Summer on the Atlantic as the US driving season kicks in (while VLCCs struggle in a really tough market) NEXT: Container Shipping - Freight rates hold on to a healthy level on the main routes