The positive demand picture that was firming freight rates on benchmark routes in all crude tanker segments towards the end of 2011 and the first two months of 2012 is still hanging around. Almost the same – that is, as Aframax tanker have seen earnings on the benchmark route in the North Sea drop during February to touch the ground before taking rates to currently USD 10,500 per day.

Demand:
The positive demand picture that was firming freight rates on benchmark routes in all crude tanker segments towards the end of 2011 and the first two months of 2012 is still hanging around. Almost the same – that is, as Aframax tanker have seen earnings on the benchmark route in the North Sea drop during February to touch the ground before taking rates to currently USD 10,500 per day.

In the larger VLCC segment rates have averaged year-to-date at USD 18,000 per day on TD3 (AG/East) as compared to USD 8,000 per day on this route last year. It is clear that the situation in the Persian Gulf has motivated some owners to keep their vessels away from the area, leaving the tonnage list shorter than during most of 2011, bringing supply closer to demand and rates moving upwards. Current average VLCC rates from Middle East to Far East float around USD 35,000 per day, with some spot fixtures reported as high as USD 48,800 per day.

The US and EU sanctions on Iran are beginning to bite, as in many ways, dealing with the nation has been made “impossible”. Oil is still being exported from Iran – mostly bound for Eastern destinations – but the fact that the EU is set to cut oil imports from mid-2012 is going to affect crude oil tanker trade patterns. Right now, Saudi Arabia has stepped in as a swing supplier to the EU, but whether they are able to fully compensate for Iran exports remains to be seen. Another important source of oil supply is Libya, as they strive to get back to pre-civil-war export levels. Currently, Libya is exporting 1 million barrels per day, with the potential to push this 50% higher. That would certainly ease the pressure on EU oil importers, as they seek new providers of oil. From a refinery point of view, a substitution from one type of Middle East crude oil to another is the most effective step, as a shift to the much sweeter Libyan oil can create some operational challenges.

Rising oil prices remain a risk factor to the tanker industry, as they may motivate importers to reduce oil imports. Current oil prices are at USD 120 for Brent oil and USD 101 for WTI. 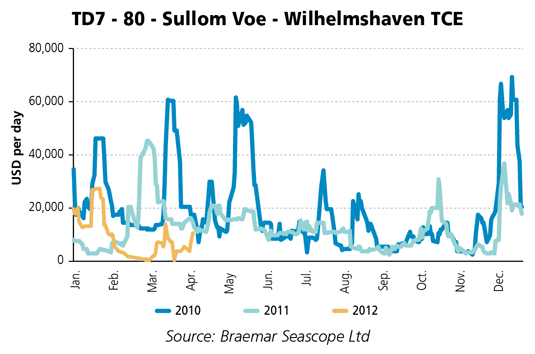 CRUDE
The sales volume in the crude tanker segment has been rather slow in the first quarter of 2012. Only Aframax tankers were in significant demand, as 7 ships were traded during March, following no activity in either January or February. Certainly year-to-date average earnings of just USD 9,500 per day on TD7 (UK to Continent) have chilled interest from buyers, but at the same time it means that secondhand prices started coming down. Recently, a buyer and seller sealed the deal at USD 9 million for an Aframax 102,000 DWT, 1995-built D/H crude carrier – a vessel like that holds around 15,000 ldt, potentially worth USD 500 per ldt at the recycling yard – meaning that the buyer only paid USD 1.5 million on top of the steel price for the vessel.

PRODUCT
Sale & purchase (S & P) activity in the Handysize and MR product tanker segment has been on a slow decline at around 10-15% from the level of 12 deals per months in 2010. The stable S & P level has taken place in an environment of rather stable second-hand prices for 5 year old product tanker tonnage. Prices for Handysize product tankers may have undershot in Q4-2011, providing an increase in activity, but they are now back at past two years average – a clear sign of USD 22 million being the post-2009 price floor. Prices at USD 27 million for a Handysize and USD 30 million for an MR during most of 2011 were strong, but the continued weakness of overall earnings has once again dampened prices, but not the activity. 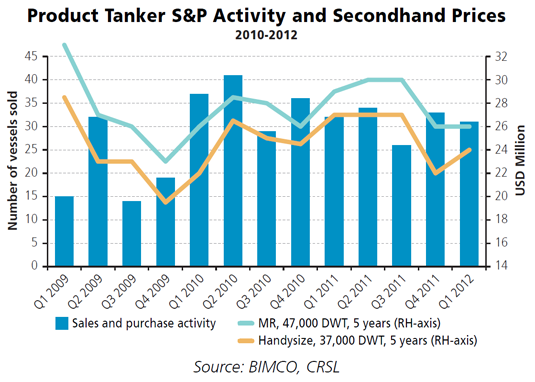 Supply:
The overall tanker fleet is forecast to grow by 5.9%, with most focus on the crude tanker segments where growth will be significant. Meanwhile, the product tanker fleet is about to receive less than 4 million DWT in net growth, which is the lowest amount of tonnage since 2003.

CRUDE
While 14 new VLCCs have been delivered during the first quarter of 2012, another 11 new Suezmax Crude Carriers and 12 new Aframax Crude Carriers have entered the fleet too. In the meantime, 4 VLCC (of which two single skins), 7 Suezmax and just one Aframax have been sold for recycling. This means that the total crude tanker fleet grew by 1.0%, as 7.4 million DWT of new tonnage was delivered and 3.0 million DWT was removed. As the deliveries came in as expected, the recycling of overage tonnage can be seen as the positive event limiting first quarter fleet growth.

PRODUCT
No more than 17 new product tankers have come onto stream during the first three months of 2012. Seven of these were MR tankers – the segment making headlines right now as being the product tanker segment where the positive effects from better market conditions will be displayed first. This potentially positive story also means that new investment in this segment is predominant. By looking at new orders, the trend is extremely clear. Out of 26 new orders for product tanker tonnage during the first quarter of 2012, 24 of them were placed in the MR segment. Meanwhile, 3 MRs were demolished out of just 0.4 million DWT in the total product tanker fleet. This meant that the product tanker fleet grew by 0.7% in the first quarter. Both deliveries and removals were slightly below our expectations. 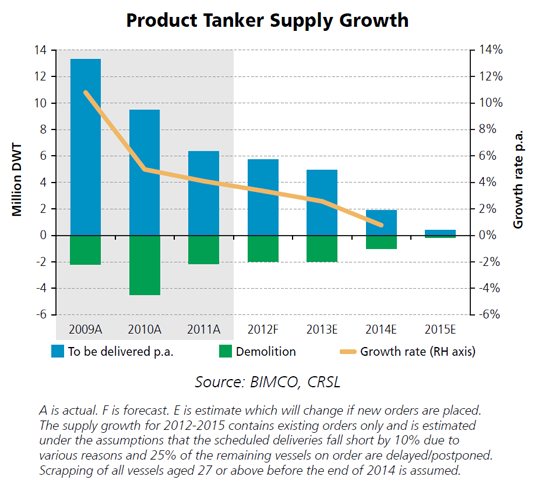 The pace at which new orders have been placed is one of the positive stories in 2012 so far. While the amount of new product tanker tonnage orders was at par with deliveries, the new contracts signed in the crude tanker segment were as low as 1.5 million DWT (4 VLCC, 1 Suezmax and 1 Aframax).

Outlook:
As we are getting closer to a full stop for EU oil imports from Iran, we might obtain a better picture of where the new suppliers are to be found and thus what effect it may have on tonne-miles.

As the Winter season is over, we can conclude that some segments benefitted from healthy ice-premiums and icy conditions in the Baltic, but the overall Winter market did not really materialise.

Going into April and May, BIMCO expects that freight rates in the crude oil segments will move more or less sideways. For VLCCs, that translates into USD 20,000-30,000 per day. Suezmaxes are expected to mirror the fairly positive VLCC freight rates at USD 15,000-25,000 per day. Aframax vessels are under pressure from the high Brent oil price and expected to move between USD 5,000-15,000 per day. Short term factors that may affect our rate forecast on the upside or downside are: changing trading patterns for AG-crude oil resulting from the situation with Iran, disruptions to traffic in bottleneck areas and Atlantic-clean products trading as US refineries close down and demand from EU can change. On the macro level, factors such as oil price development and the progress of economic recovery in major oil consuming nations can affect rates.

Handysize and MR clean rates could be supported by stronger demand from the US and EU, to make freight rates move around USD 5,000-15,000 per day, with Handysize making more than MR. Earnings on benchmark routes for LR1 and LR2 from AG going East holds limited potential for massive rate moves, and we expect freight rates to stay flat around between USD 500-8,000 per day.

Contact online
BACK TO: Macro Economics - A cautiously optimistic outlook supports the road towards higher growth and reinstates stronger business confidence NEXT: The average age of demolished crude oil tankers hits 21 – not much room left for demolition balancing the market!