Dry Bulk Shipping - Recent very tough times in the dry bulk markets are likely to improve gradually, as the downward over-shooting of rates is corrected

There is no doubt that it takes time from when commodities are bought and transportation fixed and executed to the cargo being landed at the buyer’s desired port of discharge. There’s also no doubt that buying activity for staple cargoes such as coal and iron ore was hectic during the final months of 2011.

Demand:
There is no doubt that it takes time from when commodities are bought and transportation fixed and executed to the cargo being landed at the buyer’s desired port of discharge. There’s also no doubt that buying activity for staple cargoes such as coal and iron ore was hectic during the final months of 2011. If import figures continue to stay elevated and market conditions for bulkers stay weak, we can only conclude that the oversupply glut is apparently more severe and even heavier than we expected.

Weather-related disruptions could not steal the picture from the overall devastating development in dry bulk freight rates that began in the first half of December 2011 and went all the way to early February before the bleeding was stopped. Since then, we have not seen any significant rebound, but rates have firmed slowly. This was in line with our forecast made in the previous report.

But why did the freight rates come down so sharply – did the Chinese take the foot off the throttle for a while or did other factors play in? By looking at the import figures for main commodities such as iron ore and coal into China, you will find little indication that demand has died down, but March figures may present a more complete picture. Some commodities have certainly seen a drop in demand.

In the past three months (December-February) China imported 197 million tons of iron ore – up by 12% y-o-y – and 54.8 million tons of coal, up by 36%. This special market condition was a Capesize event only. As the dawn broke on 2012, the overcapacity menace returned with a vengeance, bringing not only Capesize rates to the floor but also Panamax, Supramax and Handysize rates at the same time. 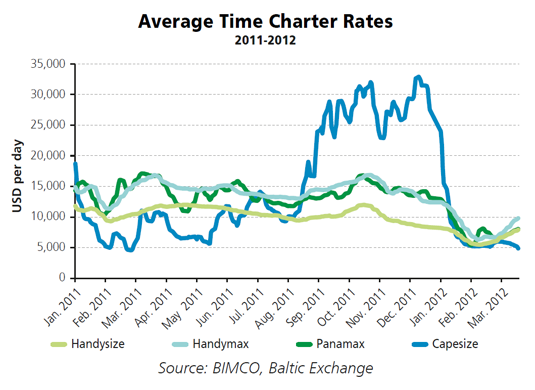 When following the recent development in freight rates it is now crystal clear that the January touch-down was a sticky one. Currently, Capesize rates are still trapped in the shadows of USD 5,000 per day. The Capesize vessels that used to rule the development of freight rates have lost their position. For long periods during 2011 – and again in 2012 – rates were significantly below any other ship size. The fundamental imbalance is taking its toll. On the contrary, Supramax rates have now moved up to USD 10,000 per day, a level sufficient to cover daily running costs. This is sadly not the case for the Capesize segment generally right now. 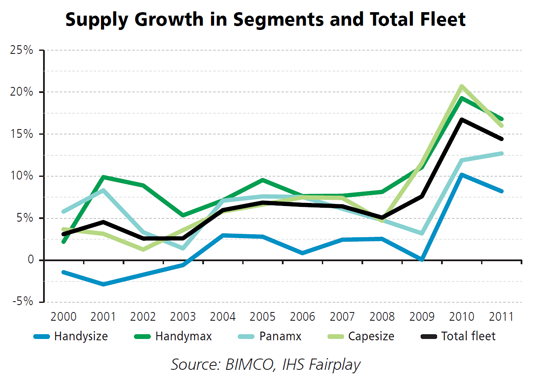 Looking back a little bit on recent history, the overall picture is similar in pattern for the various dry bulk segments, but different in levels.

The limited total fleet growth in 2009 was partly due to extensive recycling of tonnage (10.1 million DWT), partly due to the rather limited introduction of new tonnage, a picture that changed completely in 2010 with the first deliveries of an exorbitant ordering spree.

Despite a rather healthy demand picture during recent years, it remains a sizeable challenge to the freight markets to absorb so much tonnage. This has once again been carved in stone during the first quarter of 2012 and by seeing the very high segment growth rates for Capesize and Handymax in particular, the latter has been able to weather the storm in much calmer waters due to its more flexible nature in ports, cargoes and grab-fittings.

Supply:
The inflow of newbuilt dry bulk vessels was larger than expected in the first quarter of 2012. As much as 24.2 million DWT were added to the fleet. This represents a close-to-record level that is only challenged by the deliveries during Q1-2011 where 24.4 million were delivered. This development has prompted an upward adjustment to our supply growth forecast for 2012 that now reads 11.4% y-o-y.

So far, the active fleet has grown by 2.9% in 2012 as 288 vessels have been delivered, offset by 6.9 million DWT being demolished. The growth in the Handysize segment included 63 vessels of 2.2 million DWT – making the sub-segment grow by 3.2% during the first quarter of 2012. Meanwhile, the Capesize fleet absorbed another 10.5 million DWT, causing the fleet to grow by 4.3% since 1 January.

On the contracting side, things have calmed down significantly. Since the beginning of 2011, newbuilding orders have been fewer and fewer. For seven months in a row, the monthly level of new orders has not exceeded 1.8 million DWT. In comparison, the monthly average of ordered tonnage during 2010 stood at 8.1 million DWT.

The remaining order book stays biased towards the larger ships sizes, with the order book to active fleet ratios being the highest for Panamax (60,000-100,000 DWT) at 40.8% with the Capesize segment being runners-up at 32.2%. The corresponding ratios for Handysize and Handymax are 25.4% and 26.8%. 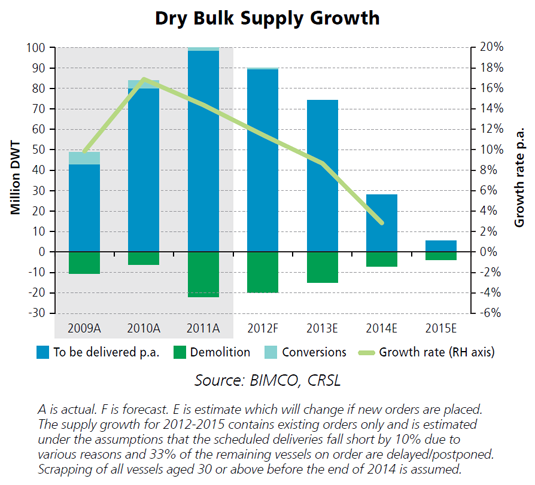 Outlook:
BIMCO has been looking more closely into the development of newbuilding prices – and in particular the correlation between second hand and newbuilding prices – in order to establish a leading indicator relationship. This may also serve as an added tool of information on asset prices to the existing tools when owners seek to obtain additional tonnage from either the second-hand market or the newbuilding market.

The results of the modelling are very satisfactory, leaving the proof in the pudding when prices are disclosed during the coming months. For Handysize, Supramax and Panamax the correlation ratio was above 90 (max is 100 for a perfect match). Only the Capesize segment failed to provide a significant relationship. While the time-lag varied from 2 to 4 months across segments with second hand prices as the leading indicator, the overall newbuilding price projection point towards a rather flat development that seems to dip by USD 1-2 million and then bottom out during the coming 1-3 months. The shortest time-lag was found in Handysize and the trend of longer time-lags followed larger vessel sizes.

The model provides only short-term projections. The most significant dip in newbuilding prices is projected for Handysize, 32,000-35,000 DWT, which is projected to touch USD 20 million before firming to USD 21 million. The current price level is USD 22.5 million. This will be the first time since 2004 prices dip below USD 22 million. For a longer term projection on the decision between using the second-hand market or the newbuilding market for the provision of additional tonnage, multiple factors come into play, but that remains outside the scope of our current modelling. 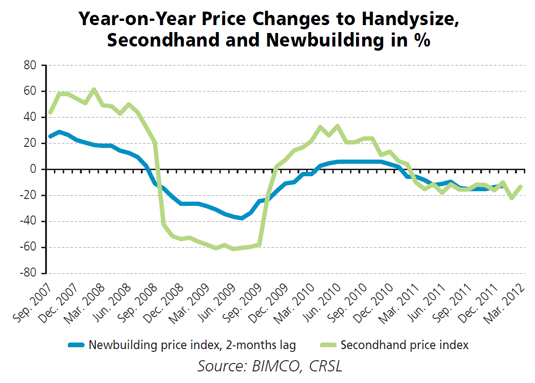 To sum up our forecast for the coming 6 weeks, BIMCO holds the view that the Capesize Time Charter Average will remain under pressure but improve from current very low levels, although it will not exceed USD 12,000 per day. For the smaller segments, we forecast that the Panamax and Supramax freight rates are likely to get closer to each other and improve, but remain in the USD 8,000-13,000 per day interval. Handysize rates should improve and head up, staying in the interval of USD 8,000-11,000 per day interval.

Contact online
BACK TO: Container Shipping - Historical rise in freight rates on main trading lanes is bettering the outlook for now, despite the large number of ships in layup NEXT: Macro Economics - A cautiously optimistic outlook supports the road towards higher growth and reinstates stronger business confidence