Container Shipping - Historical rise in freight rates on main trading lanes is bettering the outlook for now, despite the large number of ships in layup

Towards the end of 2011, we got the first indication that liner companies were winning “the pricing battle” against shippers on the level of freight rates on the main lanes from Far East to Europe and the Mediterranean.

Demand:
Towards the end of 2011, we got the first indication that liner companies were winning “the pricing battle” against shippers on the level of freight rates on the main lanes from Far East to Europe and the Mediterranean. Just before the end of last year, a round of general rate increases was rather successfully implemented, as spot freight rates from Shanghai to Europe jumped by 30% to USD 701 per TEU from USD 536 per TEU.

Nevertheless, it was a sizeable event that announced the unprecedentedly high rate increases of USD 700 per TEU that were scheduled to be implemented on 1 March actually came through to the full extent. This lifted rates by almost 100% over a two week period. Since then, rates have slid slowly, but the current level is still comfortable. Implementing rate increases at the end of the weakest quarter in container shipping can be explained by extremely firm determination with no room for negotiations, aggressive capacity cuts executed since mid-2011 and the fact that all liner companies on the route were seeking the same goal – that of higher freight rates. 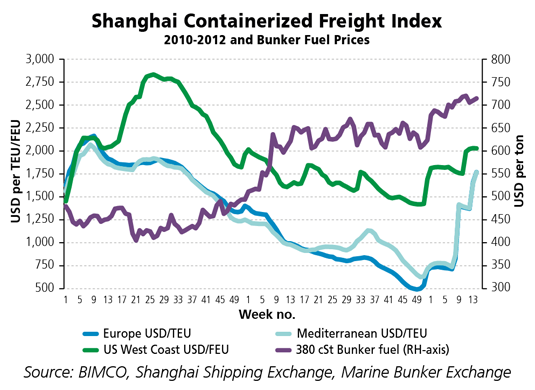 The current levels have brought liner companies back into the black figures on the Far East to Europe trades, as they continue to extensively apply slow steaming to combat the ever-increasing bunker fuel prices that constantly cut into owner’s profit margins. According to Marine Bunker Exchange, one ton of 380 cSt bunker fuel bought in Rotterdam by the end of March 2012 would cost you USD 704. This is 300% more than the price of USD 172 per ton at the end of 2008. Most recently, fuel prices have jumped again from the 2011 levels of around USD 600-650 per ton to the present USD 700+ per ton.

By making the distinction between freight rates on the one hand and charter rates on the other, it is clear that the overall container shipping market is still oversupplied. Tonnage providers were enjoying the optimistic mood of the liner companies during large parts of 2011, but those days are gone. Charter deals have become more short-term in recent years, as tonnage owners did not want to lose out on a rising market by locking in a fixed charter for a long term. But those tactics seems to have backfired – at least judged by the most recent history of charter rate developments.

As charter rates have now halved over the past year, high leverage owners that are given a short leash from their banks are struggling to cover costs. You will find several owners facing this reality amongst the tonnage providers that have invested in the container shipping market during the peak years, when newbuilding prices were much higher than today.

From a banking perspective, the ability to produce a predictable revenue and cash flow to cover at least your costs, remains highly valued. As stability in a company that is acting in a struggling market signals a strong partner. This is why it’s important to take the opportunities that present themselves in the market if they provide your business with a certain level of coverage and earnings that cover costs to get you going. 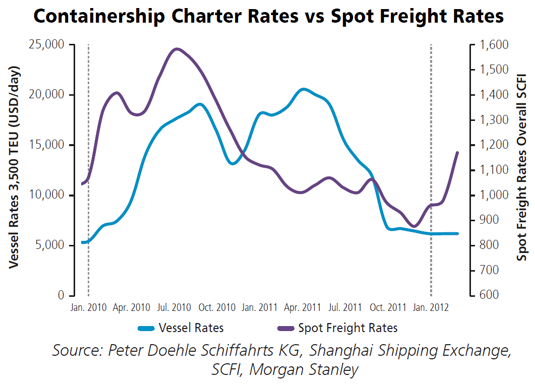 Supply:
So far, the active fleet has grown by 1.9% in 2012 and is expected to grow by 7.9% for the full year. Recycling has contributed positively to this development, as containerships with a capacity of 54,727 TEU and an average age of 26 years have left the fleet. On the delivery side, as expected the Ultra Large Containerships have caught most of the attention, as two-thirds of the capacity added to the fleet was in the segment of 12,000+ TEU vessels. If the fleet is divided into two main categories, one being all vessels below 5,000 TEU and one being all vessels above 5,000 TEU, the ratio between the former and latter is currently 52-48. This is soon to change.

Looking closer into the recycling of containerships, all but one of the 31 demolished vessels was below 3,000 TEU. However, the average age of the vessels being demolished has come down from 29 last year to 26 so far in 2012. The trend from the past couple of years is clear, with very few vessels with a capacity of more the 3,000 TEU being recycled. This trend is logical as the larger vessels are all much younger. The first 4,000+ TEU vessel, the American New York, was delivered in 1984 and the first 5,000+ vessel, the APL China was delivered in 1995. Since then – and most recently – the ships have got bigger much faster and in larger numbers following the first 10,000+ vessel, the Emma Maersk, being delivered in 2006.

In total, only ten vessels with a capacity of 4,000-5,000 TEU remain the largest vessels to have been recycled. Seven of these ships met the blow-torch in 2009. According to new analysis from BIMCO, the recycling potential of over-age containership is 2.3% if you apply the trend of the past three years as your indicator for scrapping age in the container shipping segment. A huge part of the fleet is quite young, which is why the limit to the recycling potential in a more distressed scenario only indicates 3.5% of the current fleet would be the limit. 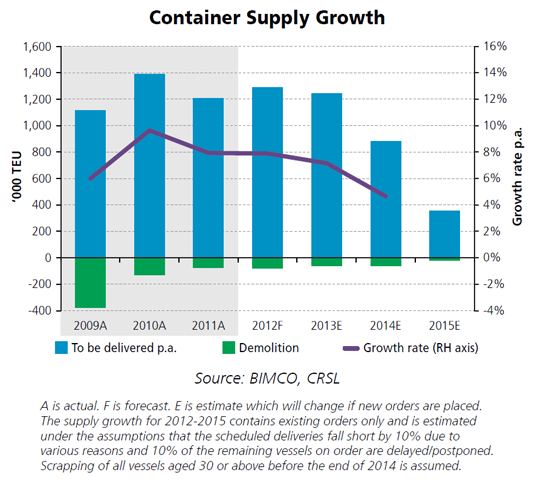 The signing of new contracts for vessels has been almost non-existing during the first quarter. Just eleven new orders have been reported, six vessels of 2,190 TEU, four vessels of 1,100 TEU and one 4,800 TEU. The vessels are expected for delivery during 2013-2015. All orders were placed at established Chinese yards, overwhelmingly but not exclusively by Chinese owners. It remains to be seen, but some of the vessels could be ordered as part of a fleet renewal strategy, as smaller vessels sizes hold the oldest and maybe also least effective vessels amongst them.

Considering that the idle fleet has now moved up to 838,000 TEU (Alphaliner), the spare capacity in the market is overwhelming.

Outlook:
The second quarter is unlikely to provide events that could fuel wild excitement. Following the full implementation of freight rate increases on Far East to Europe and the Mediterranean at the beginning of March, as well as the implementation of additional rate increases at the beginning of April, the focus for the second quarter will be changing.

Focus will now be on limiting the expected weekly decreases in rates as the weeks go by – bringing the market closer to the traditional high season in the third quarter. As the macro and micro economic elements recently have boosted confidence in container shipping, demand will hopefully follow up soon. Another focus area will be to defend the rate increases also achieved on the trans-Pacific trading lane.

The key to the recent successful implementation was the reduction of deployed capacity on the trading lanes from Far East to Europe/Mediterranean that started back in mid-2011, in combination with the backing of the rates increase by the larger freight forwarders.

Another vital topic to keep high on the agenda is the slow ordering pace. If the overhang of capacity is going to be reactivated sooner rather than later, new orders must be placed cautiously and not speculatively. Should additional tonnage be needed by owners, the second-hand market could lend a hand. The motivation behind any new orders across segments could be: 1) energy efficiency, 2) ballast water treatment challenges, 3) sulphur emissions regulations affecting your key areas of trade etc. When dealing with some of these topics, owners may find business cases that present themselves as sound and stimulating. This may influence the decision on the provision of additional tonnage.

Recently, the testing of a 10,000+ TEU vessel on the trans-Pacific trading lane signalled clearly that this is likely to be the place for the cascading of such tonnage should it become necessary to deploy the large vessel beyond the Far East to Europe/Mediterranean trading lane. Whether this will be a new norm or just a test for future deployment remains to be seen. At least it gives liner companies an indication as to whether this will work and it gives USWC ports an opportunity to prove they are able to accommodate these ships.

Contact online
BACK TO: The recycling potential in dry bulk is limited NEXT: Dry Bulk Shipping - Recent very tough times in the dry bulk markets are likely to improve gradually, as the downward over-shooting of rates is corrected