The recycling potential in dry bulk is limited

The total potential for the dry bulk fleet amounts to 5.0% when applying the observable average recycling age of the fleet since 2000 as benchmark (scenario B). But it could actually be even smaller, if you take into consideration that the recycling age is moving upwards and focus on the average age of the last three years only. By doing that, the “recycling potential” is reduced to just 3.0% of the dry bulk fleet.

Chief shipping analyst at BIMCO, Peter Sand, says: “the conclusion is straightforward and not very upbeat for those who thought that the poor markets would unleash a huge recycling potential that would offset the expected high fleet growth to a significant extent. The removal of 5.0% of current fleet is much welcomed but likely only to provide a temporary breather to the oversupplied dry bulk market”. 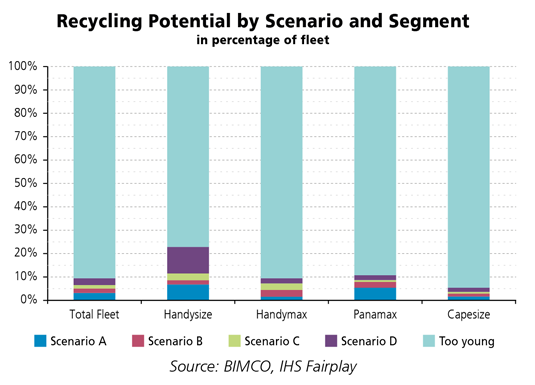 Putting the recycling potential into the perspective of recent newbuilding delivery pace, the data tells us that 20 million DWT have been delivered during the first two months of 2012. If you measure up that the 2009-2011 average recycling ages provides the best indicator for the recycling potential, we can expect total recycling of  17.8 million DWT, which would provide a fleet-growth-standstill of less than two months at current pace (scenario A). By measuring that the 2000-2011 average scrapping ages provide the best indicator, you can only add another month of fleet-growth-standstill (scenario B).

More scenarios paint a more comprehensive picture
In order to further illustrate the recycling potential, BIMCO has added two more scenarios to measure the extent of the total recyclable fleet under even stricter criteria. Under scenario C, all vessels are recycled one year prior to the average ages of scenario B (average recycling age 2000-2011). In similar fashion, vessels in scenario D are recycled three years prior to those in scenario B.

Despite the shortfalls of using history as an indicator to the future and the fact that the recycling of a vessels is not solely based on the age of the vessels, this analysis provides an illustrative and tangible assessment of the recyclable fleet.

Looking closer at the individual segments
Handysize (25,000 - 40,000 DWT): holds the largest potential for limiting fleet growth by lowering the recycling age. An “aggressive” lowering of the recycling age by three years as compared to the scenario B could cut as much as 22.8% of the current Handysize fleet. As the orderbook to active fleet ratio is the lowest of all the dry bulk segments (close to 15%), Handysize fleet growth going forward will be significantly affected if recycled volumes should increase.

Handysize recycling has always been high as compared to larger vessel sizes within the dry bulk segment. During the past 10 years, the annual average recycling rate has been 2.7%.

Overall - scenario D only makes a real difference to the Handysize segment as it makes up for an extra +11.4 percentage points (PP) of the fleet as compared to the effect on the three larger segments, which will be between 1.8 PP and 2.2 PP extra.

While reflecting on the counterbalancing effect on higher recycling volumes, it may be relevant to note that the recycling potential consisting of all Capesize vessels at the age of 26 years or older only includes 37 Capesize vessels (scenario B). This slice is cut out of a total fleet of 1,430 by the end of 2011 – out of which one-third (468) are built within the past two years. Not even in scenario D, where ships are recycled at the age of 23 or older, is the potential sizeable – just 69 vessels come into play here. The very young age of the Capesize fleet (8.5 years) signals a large Capesize fleet for many years to come.

Other relevant factors to consider
By looking at one side of the equation only - you have to duly note that other factors are relevant to the greater picture and thus the overall fleet growth. First and foremost, the actual order book and future deliveries. Another potent factor could be any regulatory initiatives that may affect the decision of when to recycle your vessel. There could be issues surrounding the Ballast Water Treatment regulation, the straighter limits for sulphur emission in ECA’s or any measure intended to regulate carbon emissions, or simply very high fuel prices. Thirdly, and perhaps most important is the future demand. Will China keep up the huge inflow of commodities such as iron ore and will the expected growth in India’s import of bulk commodities be as large as expected, or perhaps better? A slowdown in the growth of demand would have a massive impact on future development.

Outlook
This year may have started off with large amounts of tonnage being sold for recycling already – but if you look at the naked fleet statistics, the overall recycling potential is disturbingly low. Moreover, the dry bulk fleet has grown by 50% in little more than three years, creating a significant oversupply situation that now has to be handled by e.g. increased recycling or massive lay-up.

“Increasing recycling of overage vessels is an important tool to apply in order to achieve a faster return to a better balance between supply and demand. But if you believe history is a decent indicator for the future to estimate the recycling potential by, you have to admit the effect is not massively significant – even in the 'distressed' scenarios. But if you apply additional tools to handle the overcapacity situation, the markets are likely to respond positively to that and provide an improved balance sooner rather than later,” adds Peter Sand.

Endnote
Specific age of vessel sizes in the different scenarios:

Contact online
BACK TO: Dry bulk scrapping age keeps moving upward NEXT: Container Shipping - Historical rise in freight rates on main trading lanes is bettering the outlook for now, despite the large number of ships in layup