The development in demand reflects very clearly the slow growth in key areas of the world economy and the poor consumer confidence. Towards the end of 2011, rates on all trades jumped significantly – this was a complete reversal of recent fortunes, as rates jumped upwards by 13-30% week-on-week.

Demand:
The development in demand reflects very clearly the slow growth in key areas of the world economy and poor consumer confidence. Towards the end of 2011, rates on all trades jumped significantly – this was a complete reversal of recent fortunes, as rates jumped upwards by 13-30% week-on-week. Heading toward the “Spring Festival” rates firmed throughout. We are still facing very poor earnings and do expect rates to soften in coming weeks – but it does prove that the current level of deployed capacity on some routes may be closer to matching the required demand than meets the eye when staring at the freight rate diagrams.

Having said that, the endurance race that is taking place on the Far East-Europe trading lane will continue to set the scene and attract much attention for the industry during 2012 also. Rates were back above the USD 700 per TEU level by the end of 2011, but they are still very unsatisfactory and losing money every day. The first quarter, which traditionally is the slowest quarter of the year, will not change current earnings much.

The total container port throughput in the Port of Los Angeles peaked in 2006 at 8.5 million TEU, of which 4.4 million TEU was loaded inbound and 1.4 was loaded outbound. Things have turned very much around since then, as total volume is down by 6.2%, loaded inbound containers are down by 7.7% while loaded outbound is up by 48.2%. Maybe the world is getting slightly more balanced in terms of East/West import ratios as both giant trading lanes Far East to US West Coast and Far East to Europe are now handling two boxes “front haul” and one box “back haul”, while the ratio five years ago was 3:1.

The overall demand growth on the key trading lanes highlight the difficulties that a slowly recovering Europe and the US have on container shipping demand. Import volumes going into the US dropped by 0.2% y-o-y in 2011 while import into Europe is forecast to have grown by 4.2% over the same period of time. This setting is likely to swing around in 2012 to mirror the economic development in two regions. Meanwhile on “non-main lane” trades, container shipping is growing rather briskly at around 7%, but this is not enough to prevent the overcapacity from getting worse. 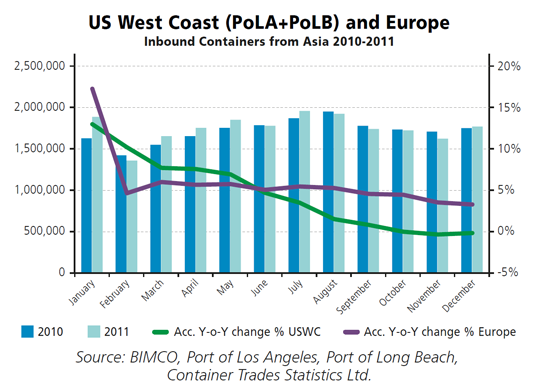 As the lack of demand is a challenge that is basically out of the hands of the industry, focus is more and more on controlling the ever-growing supply side. This is why the following illustration of poor demand is based on supply side insights.

Weekly capacity on Far East to Europe – which in all ways is at the centre of the container shipping “market share battlefield” – is currently at 370,000 TEU/week, down from 412,000 TEU/Week in June 2011 (Alphaliner). Let us put the present into perspective by looking into the crystal ball and the ships that are due for delivery in short- and medium term: Right now, we have in the active fleet 1.4 million TEU of +10,000 TEU-capacity that is all employed on Far East to Europe. Assuming a rotation of 10 vessels, this will equal 100,000 TEU of ULCS-tonnage to represent 10,000 TEU of weekly capacity on this trading lane. This equals 38% of current weekly capacity on that trade being “occupied” by ULCS’s. The current order book of 2.2 million TEU will – once delivered – step in for the remaining 62% at current weekly employed capacity.

To put the current weekly capacity into perspective, a total of 407,580 weekly TEU were deployed on the Far East to Europe trade at the peak in September 2008. It is actually a bit mindboggling that demand on this vital lane is not back at the level we saw before the crisis changed the world. One explanatory factor in understanding how this gap is bridged lies in the change in duration of the Far East to Europe loops. In September 2008 an average loop lasted 8.7 weeks; three years later the average loop lasts 9.7 weeks. 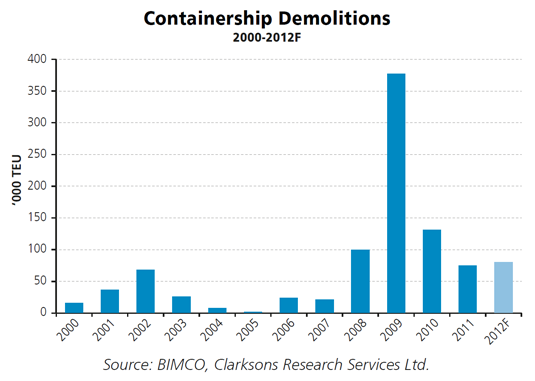 Supply:
The supply side in container shipping is much more stable when compared to dry bulk and tanker segments. 2012 is forecast to be similar to 2011, with annual deliveries slightly beyond 1.2 million TEU. Total slippage is likely to come down a bit as yards are now operating further away from full capacity utilization, which had been the case during the past couple of months.

So far the active fleet has grown slowly at just 0.3% in 2012 and is expected to grow by 8% for the full year. We anticipate that November and December 2011 will prove to be no exception to this trend. January 2012, on the other hand, is very likely to see substantial deliveries as the postponements run out.

The demolition activity is well underway – but is set to follow the trend from last year. During 2011, just 50 container vessels, able to carry between 189 TEU and 3,618 TEU and aged from being 1975-built to 1992-built, were sold for demolition. BIMCO forecasts that demolition activity will soften in 2012 from an already irrelevant level. To put the non-existing demolition potential into perspective, only 1.5% (231,000 TEU) of the container fleet is more than 27 years of age, whereas the dry bulk fleet has 6.5% of the fleet being more than 27 years old. For product tankers, the ratio is 3.2%. During February, BIMCO will look more deeply into the demolition potential across the main segments. 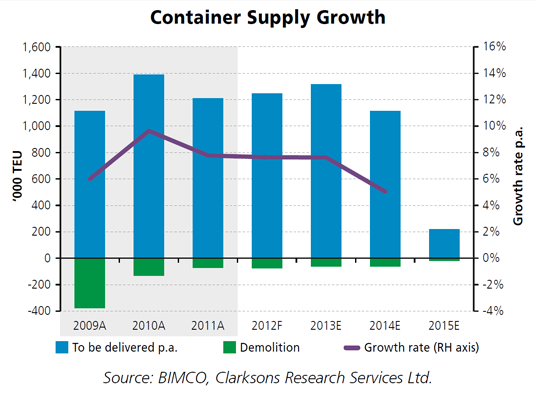 As much as 1.77 million TEU of new tonnage was contracted last year; not a level to be particularly worried about, but it is nice to see that no new contracts have been signed yet in 2012. Maybe the frenzy in October and November, where 14 new contracts for +10,000 ULCS were added to the 54 contracts that were already signed earlier in the year, has cooled interest down for the moment. The current ULCS fleet consists of 113 vessels that will soon be supplemented by the 162 vessels that are on order (151% of the current active +10,000 TEU fleet).

Outlook:
The quasi-consolidation activity on the Far East to Europe trade caught the attention of many. For a few weeks, basically all players on the Far East to Europe trade were suddenly a part of a greater team. A few weeks before, a few tonnage providers did the same thing – joining forces against the opposition to be amongst the survivors that will overcome the ongoing crisis in the world economy as well as the container shipping industry. During Q1-2012 all of the new relations will be effective – and they will all be able to boast +10,000 TEU vessels as a part of their service network on FE/Europe.

Reading from this, no one is really ready to change the current tactics and start reducing capacity even more than has already been done during the past couple of months. Moreover, it leaves little room for minority players (if there are any such left) except to disappear from the trade, taking with them any meaningful amount of capacity. Companies “left outside” the quasi-consolidations transported less than 5% of the volume in December. The extent to which the recent multiple announcements of significant rate hikes on Far East to Europe routes will be implemented will be closely watched as an indicator of the competitive supply-demand balance on the route.

Last year 45 ULCS were delivered (58 scheduled); this year has seen the first two giants already, with 57 more on schedule. But the full quantity is, just like last year, unlikely to be delivered as “planned”. It is noticeable that all but two of these vessels were ordered back in 2007-2008. The delivery wave is likely to cause larger ripples on the water as extensive cascading will follow in the wake of deployment of these giants on the Far East to Europe route. Perhaps some will go Far East to Middle East following the first initial employment that we saw just the other week.

Contact online
BACK TO: Macro Economics - Political leadership must clear the uncertainty about the future to stabilize consumer confidence ... NEXT: Tanker Shipping - Global decline in oil demand and oversupply creates challenging start of 2012