Macro Economics - Political leadership must clear the uncertainty about the future to stabilize consumer confidence ...

... paving the way for a growth scenario, as the dark clouds just won’t go away before that happens. As the world continues to deal with severe economic challenges – a very fragile world economy and high volatility in the financial markets – the IMF slashed its forecast for global GDP growth across the board.

Global economy:
As the world continues to deal with severe economic challenges – a very fragile world economy and high volatility in the financial markets – the IMF slashed its forecast for global GDP growth across the board. The IMF is now forecasting growth at 3.3%. This prophecy is not particularly helpful! Even in times of trouble, success stories happen, many are still rewarded for taking risks in new business ventures and hard work will continue to pay off in the long term. This is what needs to be communicated widely in an optimistic vein to counter the views of the doom-mongers predicting the worst. But where will we find the bravery that can talk the world back on track and stimulate optimism and confidence? That might be the greatest challenge of all!

The leaders of the Euro Area must deal with the ongoing crisis of the Eurozone. The longer lasting than expected debt crisis remains unresolved, and has now evolved into more of a lack of confidence crisis. This has led the IMF to expect the Euro Area to go into a mild recession in 2012 at minus 0.5%.

The global recovery is stalling, but fortunately most advanced economies appear unlikely to fall back into a more severe recession. Meanwhile, the Emerging and Developing Economies will continue to be negatively affected by the lack of demand from the Advanced Economies. The US is set to grow by 1.8%, equal to that of 2011, but could go higher, considering recent positive signals about housing starts and permits, employment, and consumer confidence. China will feel the heat as one of its largest export markets (EU) cannot reboot the economic growth to land a sustainable recovery that is able to create much needed jobs and ignite private consumption. China is set to grow by “just” 8.2% according to IMF forecasts. Should this occur, it will become the slowest growth rate since 1999.

Meanwhile, Brazil is set to grow stronger in 2012 at 3% up from 2.9% in 2011, driven forward by strong exports to a developing Asia and Middle East. Despite the burgeoning fractures to the Brazil-China relationship, they are expected to keep trade going. India has successfully battled inflation and with the December reporting of just 6.5% is set to sustain strong growth at 7% in 2012; maybe even stronger if the way forward is paved with stronger infrastructure development. Buoyed by high oil prices, the Russian economy is balanced in the short-term, providing an improved labour market and access to credit conditions. Following the final ratification around mid-year, Russia will become a member of WTO. This should improve trading conditions and benefit foreign trade. 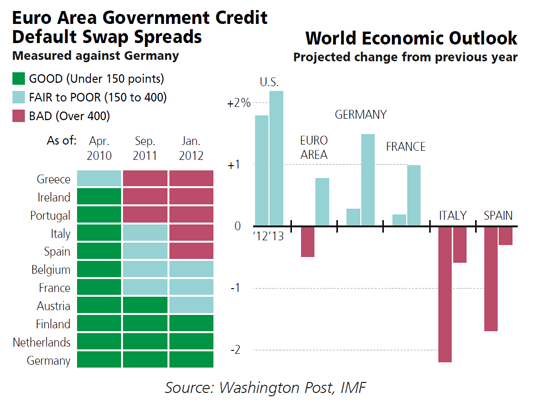 Regardless of downside risks to global GDP, growth of global economic activity has now been sustained for almost 2½ years. During 2011 it has primarily been the manufacturing sector which has struggled to stay in expansionary territory, while smoother waters have embraced the service sector. Looking deeper into the composite headline index, the Eurozone remains a drag on global output growth if you take a look at the JPMorgan Global Manufacturing & Service PMI. The main driver behind the expansion in PMI in December was the US, accompanied by the UK, India and Brazil.

Adding to the challenges of getting the global economy back on its sustainable feet is the constant uncertainty about where oil prices will go! Currently, Brent crude oil trades at USD 110 per barrel end January. Tight oil supply and geopolitical standoffs keep prices high –not fuelling economic growth positively.

US:
The economy is recovering, but at a slow pace and with a high unemployment level, despite the recent decrease down to 8.5%. Throughout 2011, American employers created 1.6 million jobs, the most since 2006 but still a long way short of the 8.7 million that were lost during the recession and its aftermath in 2008-2009. Moreover, the housing market needs a reform that makes mortgage debt sustainable and facilitates potential write-downs, says the IMF.

Asia:
In economic terms, Japan has recovered from the disaster that hit them in March 2011. It was unable to avoid a slowdown in economic activity to the tune of -0.9%, but already in 2012 the IMF sees comparatively strong growth of 1.7%. Looking ahead towards the medium-term, Japan as well as the US should implement credible consolidation plans, as heavy deficits and ever increasing debt levels potentially could threaten the two countries’ status as safe havens. Preferably, this should be in place before investors find time to take their eyes off the Eurozone.

In China, the Q4-2011 GDP growth was 8.9% as reality also bites in China where the lack of demand from its major trading partners is felt primarily in the manufacturing sector. The closely watched manufacturing PMI figures are reeling between expansion and contraction, leaving a wish for a resumption of monetary easing to keep the economy rolling.

EU:
As mentioned, the European debt crisis carries on being the show-stopper for the Global Economy to definitively leave the current crisis behind. The global outlook will not improve to reach the level of a sustainable recovery before credible, constructive and strong policy commitments anchor the necessary measures providing a new foundation for growth. It has now been two years since we experienced the first signs of economic shortness of breath from Greece. Then Ireland, Portugal, Spain and Italy also proved to be in trouble as extensive public debt, high deficits and slow (if positive at all) growth. 20 March is the next date to watch out for, as Greece has EUR 14.5 billion due for repayment on its debt.

Outlook:
Ship financing is tight and difficult to obtain, but fortunately it has not proved to be a show-stopper yet. According to Dealogic, the top 20 lenders provided no less that USD 68.4 billion in 244 deals in 2011 – up from 204 deals at 54.2 billion in 2010. Going forward, the rules of the game remain the same, as borrowers with stronger cash-flows and bank relationships will be first in line with bankers, and companies with weaker finances will have more difficulties. As traditional shipping banks hold back, doors will open to new sources of capital to fill the funding gap, probably IPOs and “private equity” or more innovative ways of financing.

The flip side of the coin is the current outstanding debt in the industry. Debt restructuring, repayment rescheduling and refinancing of existing bank debt has become part of everyday life in many shipping banks. Many defaults have been avoided due to the combined efforts of the banks and the owners. But as the low freight rates continue to haunt the industry across all segments, the challenges get more complicated. Breaches of loan-to-value covenants or other covenants were manageable, but now some owners get closer to the point of not being able to service the debt on either interest or repayment of principal. When that happens, the banks may see no other option than to find “new homes” for the indebted vessels in the nest of a financially stronger owner who is able to service the debt. In such cases, the banks are expected to reluctantly accept a hair-cut on the debt as a part of such a deal.

Bunker prices are more closely connected to Brent crude oil prices than any other crude oil price quote. Before the global crisis started in 2008, the ratio between crude oil and bunker prices was below ratio five on average it has now moved up to ratio six on average. The world fleet has grown strongly in the past three years while the “older” refineries that provide this residual fuel to the shipping industry haven’t grown at all. Cracking facilities installed in older refineries as well as new refineries are limiting the residual product (bunkers), as finer grades of oil products leave a higher margin for refinery – and a lower amount of bunkers. Other factors influencing this have been the triple disaster in Japan and subsequent extra demand for fuel oil, as well at the situation in Libya that cut off large amounts of sweet crude oil. These elements form part of the explanation behind this clearly unsatisfactory development in bunker prices – the single most expense daily cost element in shipping. 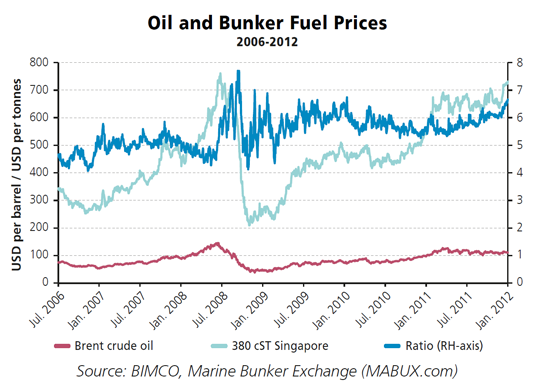 Contact online
BACK TO: Dry Bulk Shipping - Oversupply hits back and forces freight rates to the floor as troubled waters mess up the Q4-2011-party NEXT: Container Shipping - Slow economic growth hit hard, especially because of huge supply