All eyes have been on the BDI and Capesize earnings during December and January trading – but for many different reasons. While staying in very comfortable zones during December 2011, the turn of the year not only meant a new year was coming around but also that old challenges are back with a vengeance.

Demand:
All eyes have been on the BDI and Capesize earnings during December and January trading – but for many different reasons. While staying in very comfortable zones during December 2011, the turn of the year not only meant a new year was coming around but also that old challenges are back with a vengeance. BIMCO had anticipated Capesize markets to stay elevated all the way through to the Chinese Spring Festival, driven by strong demand for iron ore on the back of an import-spurring price level and rush to ship cargoes prior to the holiday. But “things change fast around here” one might add, and by looking at the earnings it’s time to brace oneself for another January touch-down before sailing on.

By 16 January, Capesize rates dug below the average time charter rates of a Handysize vessel. It was a sensation when Capesize rates first went south of Handysize rates back in late 2008 – but the circumstances surrounding that event were exceptional, as it was just a few weeks after the financial crisis broke out. But during 2011, 44% of all quoted days have seen Capesize rates south of Handysize rates – pretty illustrative as a measure for how sensitive the markets were during the first half of 2011. Several natural disasters “paid the piper and called the tune” – and it was all about the blues. 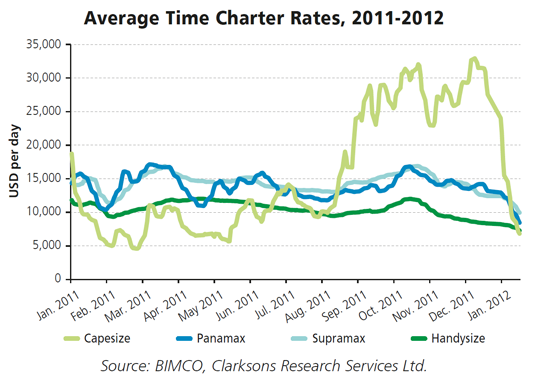 In our last report, we estimated that at least 61.2 million tons of Chinese iron ore imports were needed during November and December to keep Capesize rates in the range of USD 20,000-30,000 per day. What we got were imports of 64.2 and 64.1 and monthly average rates of USD 26,160 and USD 30,651 per day. But towards the end of December, vessels chartered to ship iron ore to China dropped heavily – as did freight rates. By mid-January, iron ore chartering activity got back at a satisfactory level only to be hit by the Chinese holidays. This means tonnage will pile up again at loading ports waiting for demand to return early-February.

Those Capesize owners lucky or prudent enough to fix on medium to long term in December took advantage of the higher markets at around USD 20,000 per day for 4-6 months T/Cs. Capesize fixtures coming in during January prove that time charter deals are sharing the pain that is felt in the spot markets too, fixing 4-6 or 11-13 months a USD 13,000 per day for brand new tonnage.

Supply:
As we have entered a new year it’s also time for a short status of 2011 that turned out to be a monster year in many respects. The biggest positive surprise was without doubt the 22.2 million DWT of demolished tonnage. Of this, 67 were Capesize vessels sold for recycling primarily during the terrible first six months. Characteristics of the average Capesize vessel that left the fleet: 156,845 DWT, 27 years of age, recycled in Bangladesh at USD 509 per Ldt., leaving USD 11.5 million for the owner from taking the vessel out of active trading.

During 2011, an average of 8 million DWT was delivered into the market every single month. This was an unprecedentedly high number – something we hopefully won’t see again before the fleet is twice as big as today in 2034. If January deliveries are to give any indication into 2012, a level of little more than 6 million is relatively positive, as the pace is coming down from 2010-11. However, it’s still a historically very high level.

So far, the active fleet has grown by 1.0% in 2012, caused by delivery of 79 new vessels of 6.4 million DWT, offset by 1.6 million DWT being demolished. BIMCO expects total demolition in 2012 to come down from the 22.1 million DWT that was demolished during 2011 but to stay high, as freight rates are bound to keep pressure on earnings, pushing more over-aged tonnage over the edge. Total inflow of tonnage in 2012 is estimated to hit 78 million DWT, counterbalanced by higher than previously expected demolition of 19 million DWT. Following the upward adjustment of the demolition potential the dry bulk fleet holds for 2012, the fleet is now set to grow a bit slower at 10% during 2012.

As 2011 only saw 26 million DWT being contracted, which was the lowest level since 2002, BIMCO expects 2012 to provide more of the same on that front. Overcapacity bites – and whatever cash reserves are left from before the financial crisis broke in 2008 or leftovers from the surprisingly well 2010 is not expected to be spent on new build first installments. Not even the elevated Capesize earnings that we experienced during the 4th quarter of 2011 made owners call the shipyards to place new orders. 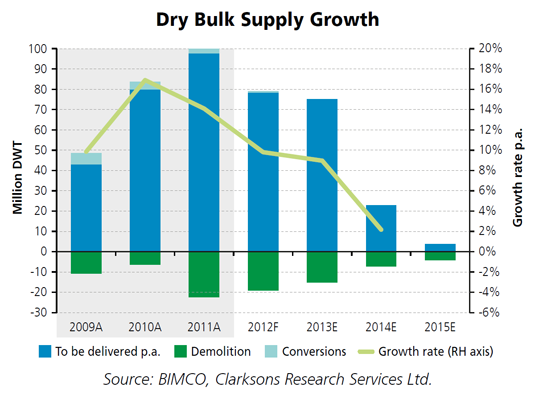 Outlook:
Strong coal and iron ore exports from Australia combined with stronger than expected Japanese coal imports were a few of the powerful forces that enhanced port congestion and gave Capesize owners a pause to catch some fresh air before the roller-coaster ride continued southbound. Opportunities in the time charter market are gone for now and only the spot market remains in focus.

As demand has dozed off, there is a return of pressure from the tonnage oversupply that must go away before rates will be supported by returning demand. Provided that iron ore spot prices will stay competitive/attractive as compared to the domestically mined ore within China, this should support demand, regardless of the level of stockpiles at Chinese ports and a stagnating steel price. But the lift will come in weeks rather than days.

One of the main events during 2012 will be the 19 Vale-connected +400,000 DWT VLOCs that are due for delivery. They come on top of the 5 VLOCs delivered in 2011 and another 125 new Capesize vessels that are going to be delivered in 2012. The “low” level of new Capesize deliveries comes after two mammoth years where 213 (2010) and 248 (2011) were launched and the easing inflow could be further potentially buoyed by another 60 Capesizes being demolished, assuming the 2011-standards for scrap-matured vessels are applied. Even with the extensive focus the VLOC’s have received, in the context of the sheer amount of VLOC-tonnage as a share of the total Capesize fleet, 5% remains minor. 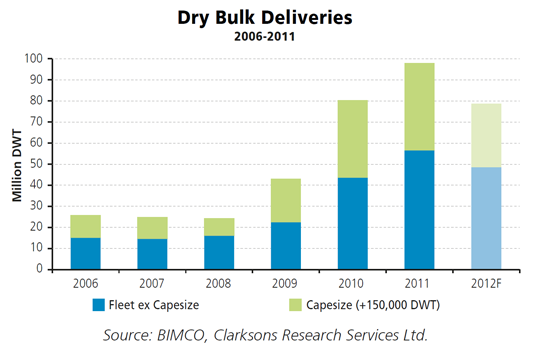 The only seasonal factor that could support rates during the first quarter is thermal coal for heating in the northern hemisphere winter, including China. But pulling in the opposite direction is the structural overcapacity and the seasonal winter rains in Brazil and South Africa and cyclones on the west coast of Australia that delivered a significant blow to freight rates last January as massive amounts of cargo were cut off.

To sum up our forecast for the coming 6 weeks, BIMCO holds the view that the Capesize Time Charter Average will remain under pressure and stay below USD 12,000 per day as tonnage oversupply has hit back at a time where demand is taking a small breather. Meanwhile, we forecast that Panamax and Supramax freight rates are likely to develop rather flat and stay in the USD 7,000-13,000 per day interval. Handysize rates are expected to remain close to the operating break-even freight rate level at USD 6,000-8,000 per day interval.

Contact online
BACK TO: State of the Shipping Industry and Forward Looking Perspectives NEXT: Macro Economics - Political leadership must clear the uncertainty about the future to stabilize consumer confidence ...