Overall, it’s noticeable that record numbers of fixtures and demand for tonnage only produce a short-lived spike at rather low altitudes – making little impact on stretched owners’ financial accounts. Ship owners without a solid cash balance and a strong, or at least sustainable, cash flow will find it increasing difficult to continue in this business at the present level and volatility.

Demand:
Overall, it’s noticeable that record numbers of fixtures and demand for tonnage only produce a short-lived spike at rather low altitudes – making little impact on stretched owners’ financial accounts. Ship owners without a solid cash balance and a strong, or at least sustainable, cash flow will find it increasing difficult to continue in this business at the present level and volatility.

This is the short version of the tanker market today. Product tanker owners have been on the ropes for years now, recently joined by crude oil tanker owners who are about to take up that position in coming years. As the trend is turning sour for crude tanker owners, product tanker owners are looking forward to an easing of the supply situation to escape the prolonged bad run of poor earnings.

CRUDE
As we head into the Winter season, VLCC demand could be supported by global refinery crude throughput which has seasonal peaks in July (cooling) and December (heating). As clearly reflected in the rising freight rates on the TD3 benchmark route, this has already lifted freight rates beyond USD 20,000 per day, at least temporarily. As rates break through the USD 20,000 per day level for the first time in eight months, owners are enjoying a much-needed break as they prepare to brace for an expected hard landing any day soon. But since 80% of the December “liftings” are already fixed at the time of writing, rates are not likely to jump in December.

Layups have been “warm” and few in numbers, as no one wants to leave the market in anticipation of a spike in rates – so far successfully, as rates have gone up. But in order to make the current freight rates stick for a while, owners must focus on timing and the positioning of their active fleet, closely following orders and applying all the options within their sphere of influence. Unfortunately, the vital comeback of demand isn’t. 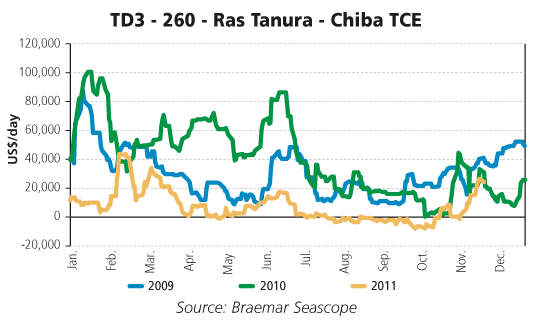 Sunoco and ConocoPhillips have announced the selling/closure of three US Atlantic coast-based refineries due to poor margins and cited large investments to meet new regulations on sulphur contents in oil products. As 0.7 million barrels of crude oil per day of refining capacity could be shut down by mid-2012 , product trade flows are set for a substantial change.

This is bad news for crude oil tankers, as oil exports from North Sea and Nigeria are going to disappear but could potentially turn into shorter haul exports. Meanwhile, this development holds the potential for boosting oil product imports extensively into that area (US East Coast and Midwest) and of reversing the recent development of falling arbitrage-trading volumes for MR product tankers.

CLEAN
Earnings on LR1 and LR2 benchmark routes from Ras Tanura in the Arabian Gulf to Yokohama in Japan (TC5) have been on the slide since they stopped fixing above USD 10,000 a day back in September. By mid-November, LR1 activity was very busy – that resulted in rates going as high as USD 4,500 per day – coming from a few weeks at rock bottom. This is quite illustrative of how serious the situation is for LR1s in general and naphtha imports to Japan in particular. The year-to-date average earnings on TC5 stand at USD 5,500 per day.

Meanwhile, the medium range product tankers on the cross-Atlantic trade (TC2) have performed comparably much better at USD 11,500 per day – which is similar to 2010-average earnings. However, even this level of earnings only covers little more than OPEX, and is far from covering full financing costs.

Supply:
The active total crude tanker fleet has grown by 6.1% so far this year, with 30.1 million DWT of new vessels having been launched. Yet another 5 million DWT await launching, bringing full year supply growth up to 8%. As the single-hull phase out took its toll last year, the demolition candidates remain few, looking forward. Total tanker fleet excluding product tankers now consists of 3,490 vessels. 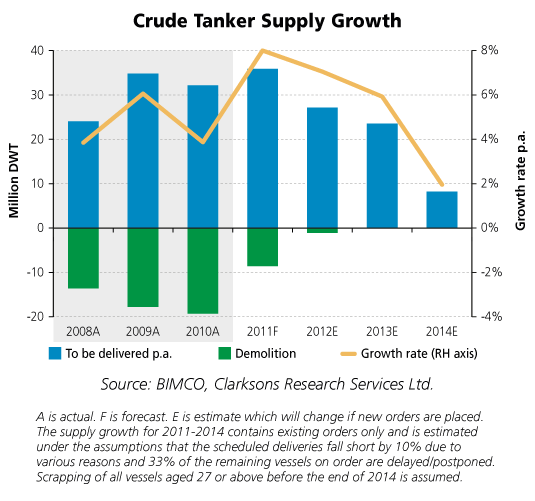 Outlook:
Following lower-than-expected oil demand growth in the US, Japan and China in the third quarter, the IEA has yet again revised down global oil demand for 2011 and 2012. This in turn results in a fundamentally lower demand for oil tankers.

Despite much talk about oversupply, the lack of available tonnage can still affect rates very positively. Owners will be looking out for more natural supply disruptions in the coming years to put pressure on charterers at points in time where shortages of tonnage may emerge. The Bosporus Strait is one of the maritime choke-points that are critical to the oil markets and thus also tanker shipping markets. Around 3 million barrels of oil pass southbound through the Bosporus Strait every single day. The oil from the regions near the Caspian Sea is loaded onto Suezmax tankers (the largest tankers able to pass) and shipped via the Black Sea to customers primarily in Mediterranean countries. The extensive delays in the first half of October lowered tonnage availability in the Mediterranean and turned the situation around. For a short time owners were in an improved bargaining position whilst charterers were looking to secure tonnage in the Mediterranean basin. Crude tanker freight rates shot up cross-Med, but also very significantly on routes going into the Mediterrenean and crude oil trades out of West Africa. The delays affected freight rates in all three crude tanker segments, despite the fact that only Suezmax and Aframax were caught in traffic.

A longer-lasting trend with a much different scoop originates from the increase in US oil production and higher pipeline imports from Canada. The development of unconventional oil fields on shore and offshore using advanced technology has turned around a long-lasting slide in US crude oil production. With exploration particularly into shale oil, the trend has been reversed and resulted in a lower and lower level of US oil imports. Moreover, US oil exports have risen, with distillate fuels going for Europe and Latin America while gasoline is mostly sent to Mexico and other Latin American nations. In the third week of November, US oil product exports reached an all-time-high level at 2.86 million barrels per day.

Rising oil prices and a low level of known domestic reserves of conventional oil have turned the US energy situation around. In the near future, this also holds the potential for the US to start to export gas and LNG. 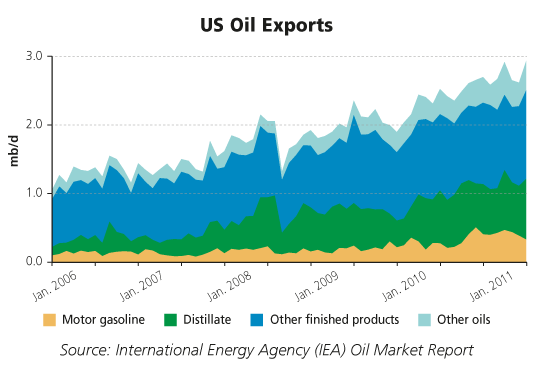 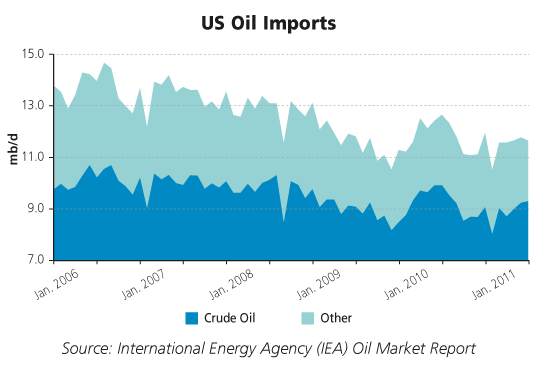 BIMCO expects that freight rates in the VLCC segment will come down sooner rather than later, to join the clearly unsatisfactory rate levels in the Suezmax and Aframax segments. The product tanker segments are expected to feel the rides of very volatile markets, where rates can double one week and halve the following. The jittery market conditions are mostly loaded with upside surprises from current levels.