By looking at the JPMorgan Global Manufacturing & Service PMI, it is clear that global growth is under pressure, as PMI output reaches the lowest level since mid-2009. The PMI data shows that global private sector output expanded at the weakest rate since the recovery began in August 2009. At 51.4, down from 52.0 in September, the output index indicated only a modest increase in economic activity.

Global economy:
By looking at the JPMorgan Global Manufacturing & Service PMI, it is clear that global growth is under pressure, as PMI output reaches the lowest level since mid-2009. The PMI data shows that global private sector output expanded at the weakest rate since the recovery began in August 2009. At 51.4, down from 52.0 in September, the output index indicated only a modest increase in economic activity. 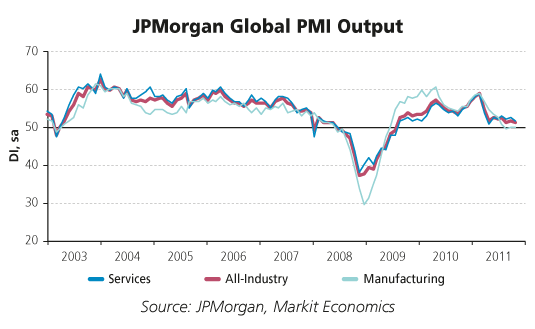 In the advanced economies, rates of expansion slowed in both the US manufacturing and non-manufacturing sectors, while the downturns in Eurozone manufacturing and services deepened. Within the Euro area, Germany came closer to stagnation, the performance of France deteriorated sharply and the rate of contraction in the residual Euro area nations accelerated.

On a brighter note from Asia, Japan experienced an all-industry activity rise for the first time since February. Output rose in both the manufacturing and service sectors.

Among the emerging markets, all-industry output growth accelerated to a five-month peak in China. The rate of expansion also came in higher in Russia. India saw growth pick up fractionally in a divided economy, as a steeper expansion in manufacturing output offset ongoing services contraction. Finally, in Brazil, the all-industry output returned to growth despite a solid drop in manufacturing production.

Moreover, October data signaled an increase in all-industry employment, with modest job growth reported by both manufacturers and service providers. Staff levels increased in the US, China, Germany, France, Brazil and Russia. Job losses were reported by Japan, the UK, Italy, Spain and India.

As growth hesitates to find a solid foundation it’s worthwhile to note that the high oil prices constitute a heavy chain around the legs of recovery.

The difference in oil prices between the Brent oil (USD 107.78 per barrel) and the West Texas Intermediate (USD 97.37 per barrel) is significant. As the US market is well supplied for in quantum, the price has dropped. Despite the recent correction in the market, the gap remains close to USD 10 per barrel. This is down from USD 25 per barrel, which was the difference from mid-August to mid-October. A rally in October due to expectations that US crude oil stocks were to shrink for an extended period of time saw WTI increase by 20%. Over the past month Brent has dropped from USD 112 per barrel to USD 107 per barrel, while WTI has been on the rise from USD 91 per barrel to USD 97 per barrel. Despite volatility in crude oil, bunker oil prices seem to know only one way – and that’s up… This is bad news for the global economy, as a much lower oil price would surely fuel a much faster recovery. 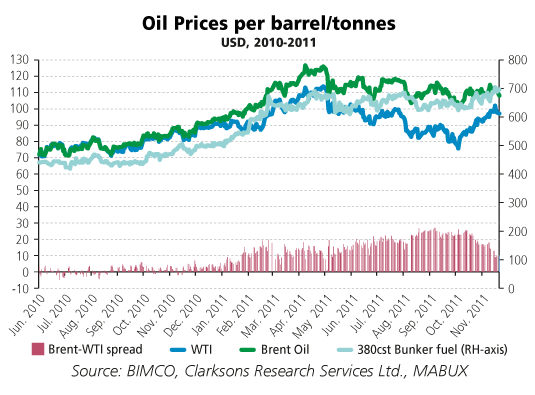 US:
While austerity measures and extensive budget cuts are passed by governments across Europe almost every week, the recent failure of the Congressional “super committee” is likely to postpone any significant expenditure cuts beyond the next presidential election. This is bad news for the US economy, which posted GDP-growth at an annual rate of just 2.0% in Q3. The total gross public debt-to-GDP ratio is reaching 120% this year. (Gross public debt comprises Federal, State and local government debt). This is up from 81% in 2007 just before the crisis.

On the more positive side, the US housing market is still breathing at slightly positive growth rates overall. Year-on-year changes to existing home sales are up 12.3% on volume but down 3.4% on price in October. The growth in home sales is happening amongst houses in the lower price ranges up to USD 500,000 (14%). Meanwhile, home sales with a price tag above USD 500,000 are down 9% from a year ago.

Even though consumer confidence remains pessimistic, it is worth noting that consumer demand is getting very close to the all-time-high level of 2007. Another way to look at consumer demand would be to focus on the fact that 3 years of growth has been lost due to the ongoing crisis.

Asia:
As the Chinese manufacturing PMI is once again below the 50-index point-threshold, we are heading into a period of slightly slower growth. In GDP terms this indicates that we will see growth going below 9% and in terms of industrial production the activity level is suggested to reach 11-12%, marginally down from last year’s +13%. This key figure supports the going trend and reflects a soft landing in the world’s second largest economy that struggles to cope with the impact of slower growth in export volumes and a proportionally weak domestic market.

“There are dark clouds gathering in the global economy and Asia will need to watch them carefully,” IMF Managing Director Christine Lagarde said in Beijing in November. Elaborating on that, we conclude that there is no more reason to promote any de-coupling theory – as the World is truly inter-connected and dependent on international trade increasing to secure a sustainable and balanced global economy.

As the global economy is still in a dire state, the US Dollar/Japanese Yen cross exchange rate is now hovering between 75 and 78, which represents an appreciation of the Yen from the low-80’es in the early part of the year as investors flee to “safe havens” such as the Japanese Yen. However, this is a bad development for Japanese exports, as the economy strives to recover fully from the triple disaster and a decade of deflation and low growth.

EU:
As the debt crisis continues the European Central Bank and the International Monetary Fund continues to put pressure on the Greek Government to meet the criteria for making the bail-out plan a success. The debt disease is contagious and the jury is still out as regards an eventual rescue of Italy and Spain and whoever is next in line.

Outlook:
Going forward, we should be scouting for a recovery in the labour markets to support aggregate household incomes. Positive global job growth during 2012 will be crucial for a sustainable recovery in consumer spending and by that recovery of the entire global economy.

The Asian region clearly continues to drive the global recovery, but at the same time, no country or region is an island. This means that if strains in the Eurozone worsen further and/or the US fails to re-ignite GDP-growth, Asia would be negatively impacted via trade as well as via the financial sector.

By mid-November the price that banks pay each other to convert Euro payments into Dollars, reached the highest level since December 2008. While the cost of dollar funding is increasing as Europe’s debt crisis escalates, it also spells out bad news for ship finance, as the large European (shipping) banks make use of converting currency when lending out to ship owners. But tough as the ship finance market appears, the total global lending portfolio remains as large as one year ago – indication that money is still around to finance our industry. Offsetting the above challenges to some extent was the co-ordinated action from six global central banks to lower borrowing costs. The move had an immediate effect on the loan markets, making it cheaper for banks and borrowers to access funding and reassuring the market that liquidity is available.