While the workhorses in the Panamax and Supramax segments performed in line with the BIMCO forecast – hovering around USD 15,000 per day – Handysize vessels performed slightly worse than expected, tipping their toes just South of the USD 10,000 per day. On the very positive side,

Demand:
While the workhorses in the Panamax and Supramax segments performed in line with the BIMCO forecast – hovering around USD 15,000 per day – Handysize vessels performed slightly worse than expected, tipping their toes just South of the USD 10,000 per day. On the very positive side, Capesize rates tackled the dip at end-October to see rates soaring again in November. The development is driven purely by vessels chartered to haul iron ore to China. Coming down from 28 chartered ships a week by mid-October, weekly activity dropped to 11 per week by the end of October, due to falling steel prices. However, activity rebounded strongly throughout November as iron ore prices fell rather significantly too to offset the negative impact from falling steel prices, according to Commodore Research. This development is mirrored perfectly in average time charter rates.

Export prospects for Russian wheat are still strong and building. This is evident from recent very strong sales following solid demand for vast volumes and competitively priced wheat, despite appreciation of the Rouble against other currencies. However, there are concerns arising in the wake of the success that Russia will impose grain export restrictions should total grain exports reach 24 million tons. In an attempt to export before restrictions are imposed, traders and producers are shipping a lot of output to ports, creating railway jams. Ironically, these jams lowered the pace of exports in October.

The Panamax and Supramax rates in the Atlantic basin have found only little support in the wheat and grains coming into the market via the US Gulf. Rates have come off over the past months, but should firm slowly as demand for thermal coal picks up as we head into the Winter in the northern hemisphere. 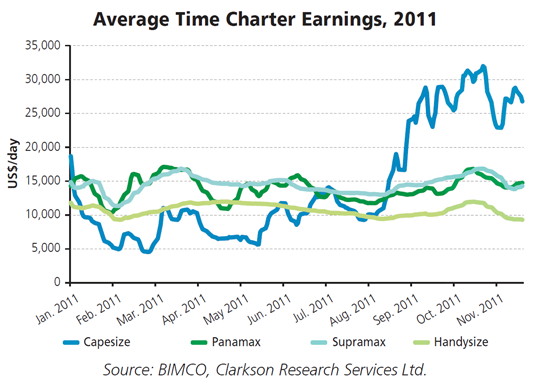 By early December, 230 new Capesize vessels (+170,000 DWT) were delivered. That’s more than one new vessel every second day throughout the year. In total, BIMCO expects 245 new Capesizes will have been delivered in 2011 before New Year’s Eve. The projections for next year anticipates delivery of another 220 new Capesizes.

Strong inflow of new tonnage and high amounts of recycled tonnage have brought the average age of the Capesize fleet down to 11.5 years from 13 at the start of the year.

The level of new contracts dropped month by month as the year passed by. From close to 5 million DWT contracted in January, only 0.8 million DWT was contracted in October. This is a 29-months’ low level – an extremely positive development that bodes well for this segment of the industry, especially when seen in the perspective of the rise in freight rates during the past few months and owners not queuing up to place new orders. 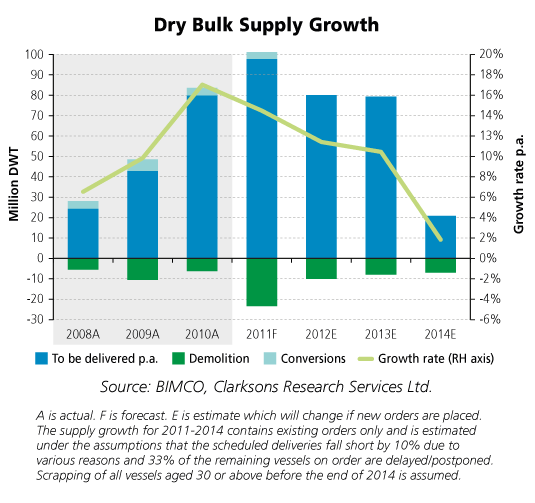 Just two months ago BIMCO released an analysis entitled: “Record recycling activity stirs optimism in dry bulk”. By that time, the potential of reaching 25 million DWT was within reach if high demolition rates were kept attractive to owners and rates did not improve significantly. Today, the “bull run” towards the recycling yards is over, demolition rates have come down in the Far East and Bangladesh has stopped taking in more new business. Meanwhile, average freight rates have stayed more or less unchanged, near year-high levels, making demolition activity cool down significantly. 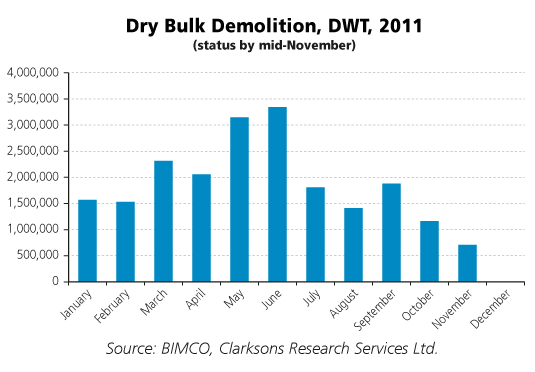 Outlook:
Despite the supply-side pressure, we put our money on black and forecast that Capesize rates are going to be supported by lower iron ore prices and coal demand for Winter heating in the coming months, thus we expect freight rates to stay sensitive to iron ore price developments but above USD 20,000 per day. A key observation from BIMCO is that we believe mining companies will prefer to sell this important steel production ingredient in larger volumes rather than higher prices, as long as China appears ready to purchase.

In order to deliver the support needed to keep rates elevated, Chinese iron ore imports will need a level of 61.2 million tonnes in both November and December, which in turn will bring the annual total import growth to +10% y-o-y. The supporting argument that must trump the negative impact from high stockpiles and slower steel production is the pricing game. China has built a firm reputation for playing the commodity markets well. 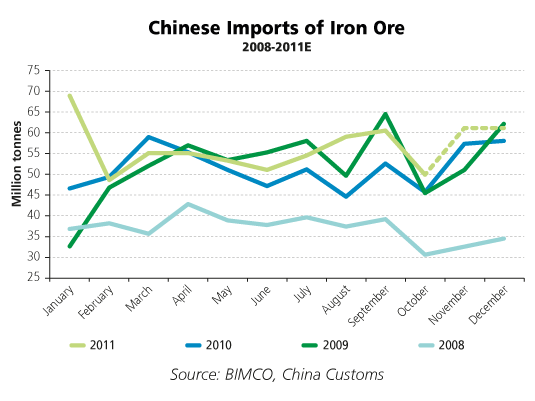 Looking beyond the Capesize fleet and into 2012, the smaller-in-size segments are going to experience a healthy slowdown in new deliveries. Right now, deliveries are estimated at 80 million DWT – equal to a fleet growth of 11.4%; a number that is likely to get slightly inflated by vessels that were set for December delivery but end up being January deliveries instead.

A potential upside may also come from Russia, if they decide to impose a ban on grain exports to stop excessive outflow of the foodstuff. This will lead to longer hauls, as African and Middle Eastern importers will have to look for alternative sources potentially further away. Should they go to the most likely exporters, Australia or Argentina, the impact on the freight markets will be most significant.

To sum up, BIMCO holds the view that the Capesize Time Charter Average will remain at USD 20,000-30,000 per day but the tonnage oversupply will eventually hit back. Meanwhile, we reiterate our forecast on the Panamax and Supramax freight rates that are likely to stay put in the USD 13,000-17,000 per day interval. Handysize rates are expected to gain traction and return to the USD 9,000-13,000 per day interval.

Contact online
BACK TO: Optimism is tangible, although ship yard overcapacity is the looming danger in the horizon NEXT: Macro Economics - Mixed global growth trends and modest job creation generates a very challenging setting